Exact Sciences (NASDAQ:EXAS) (EXAS or the "Company") is the Wisconsin-based company behind the overhyped soon to fail colon cancer screening test known as Cologuard. As such, we believe that the fair value for this persistently cash flow negative, value-destroying Company is at best equal to the value of the cash on its balance sheet, or less than $3 per share. We will demonstrate over the course of this series, why we feel that the stock should be aggressively sold or shorted. This article is the first in a five part series which will cover:

In order to be successful, Exact Sciences will need to show that Cologuard is an effective test, gain reimbursement, convince doctors to prescribe the test, and make a simple enough test that patients will use it. We believe that they will fail at each of these tasks. In this article, we will explain why we believe that the Cologuard test has a high probability of being rejected by the FDA and why, in the unlikely event that it is even approved, it will almost certainly be a commercial failure due to its lack of efficacy.

Exact Sciences would like investors to believe that Cologuard will revolutionize the detection of colon cancer. The Company believes that Cologuard will replace the colon cancer screening Fecal Immunochemical Test (FIT), just as the FIT has progressively replaced the Fecal Occult Blood Test (FOBT) in recent years. To support this contention, the Company has used a highly promotional slide deck in conversations with institutional investors. Curiously (perhaps because Exact knows it is misleading?), a copy of this slide deck has never been filed with the SEC. To aid investors, we have posted a copy of it here.

Cologuard Is Actually Less Effective And More Expensive Than FIT 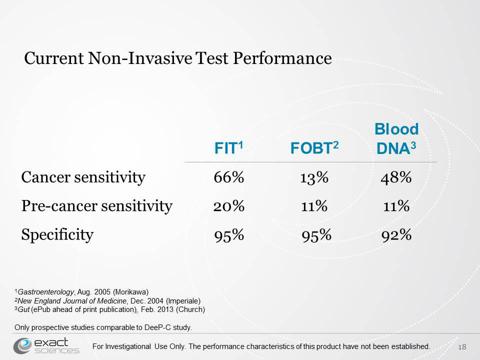 While it seems from the data that the Cologuard test is better than the FIT, nothing could be further from the truth. In fact, the FIT, when properly administered, is superior to Cologuard. Exact Sciences hides this statistical fact by not providing an apples-to-apples comparison. When compared over the same number of years, the FIT proves to be more effective in identifying colon cancer. This article will clearly explain why.

Let's start by reviewing in a table format what Exact Sciences would like investors to believe:

First, it is important to consider the vastly different frequency with which these tests are meant to be administered. According to Exact, Cologuard is designed to be administered every three years and is expected to cost $400, per Canaccord Genuity's May 27, 2017 EXAS research report (see excerpt here). In contrast, the FIT is designed to be administered annually and costs $23 ($69 over three years) per the same report. This difference in frequency is incredibly important. The sensitivity and specificity of the Cologuard test should be compared to the sensitivity and specificity of the FIT administered each year for three years (the cumulative efficacy of the FIT). We know that even Exact Sciences believes it is important to consider the cumulative efficacy of a test, because they do so in their presentation on slide 20 as can be seen here: 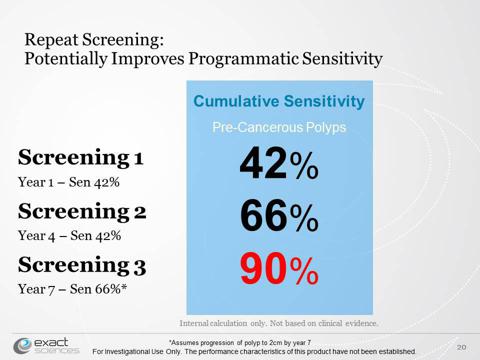 When you normalize the FIT and Cologuard tests for their frequency, the FIT shows itself to be superior to Cologuard in nearly every aspect. Over a three-year time period, the FIT is better at finding cancer and misses fewer potential cases.

Below is the expected performance of the Cologuard test in a 10,000 patient group, identical to what the company used in its DeepC test.1 This assumes that the test is given once every three years, as suggested by the Company. Below it, we show the FIT being administered to those same patients every year for three years. 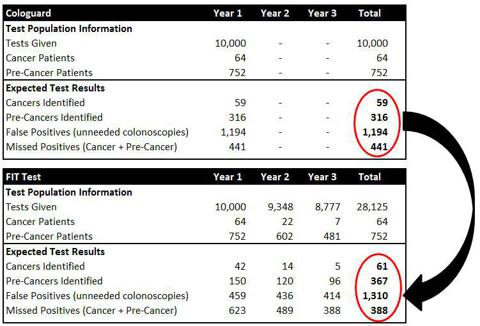 Even based on the data that the Company highlights, investors should clearly understand that Cologuard significantly underperforms FIT:

When compared on an apples-to-apples basis, the FIT outperforms Cologuard on the three most important metrics. The lone exception is unnecessary colonoscopies, where it is a mere 10% worse.

To make things worse, the Company chose data from an outdated FIT study that happened to be the single worst study we could find from the last 10 years. We identified 6 other trials that on average, inclusive of the trial that Exact used in its presentation (a total of 7 trials), shows that the FIT has 77% sensitivity to cancerous tumors, 39% sensitivity to pre-cancerous lesions, and 95% specificity.2 When these average representations of the FIT are used, the Cologuard test looks even worse in comparison:

Here is the expected performance of the FIT based on the average performance in the trials we identified: 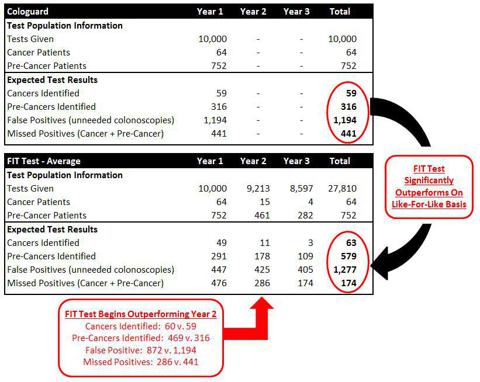 Using this average data, we can now see that in all cases the FIT appears to be even more effective than originally thought:

In fact, after only two years of testing the FIT is already outperforming the Cologuard test:

Exact Sciences Ignores the 800lb Gorilla In The Room: The InSure FIT

Now we would like to introduce the InSure FIT. While the FIT is a good test, the InSure FIT is even better and is the current leader in take-home FIT testing. Importantly, because of the quantity of stool needed for Cologuard, it will be almost exclusively a take-home test - more on this in part 3. The InSure FIT has 88% sensitivity to cancerous polyps, 43% sensitivity to precancerous polyps, and 97% specificity, which can be seen here. A comparison between Cologuard and InSure would be as follows:

These are the results that we would expect from the InSure FIT using the identical 10,000 patient group: 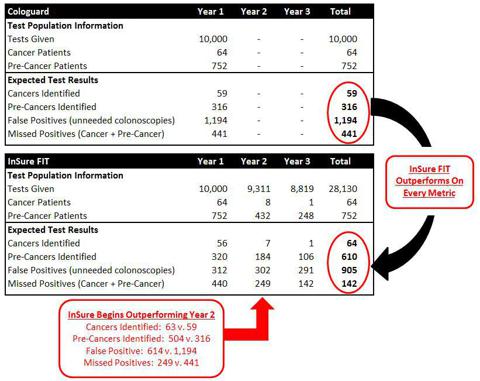 Using the InSure FIT as the comparator, Cologuard underperforms every single end point:

In fact, the InSure FIT outperforms the Cologuard test only two years into the three-year testing cycle:

The mystery of the FIT comparison does not stop there. There are two other oddities regarding the Cologuard trial. First, it appears that Exact administered a FIT in its DeepC trial in order to compare the two tests in an identical patient population. Exact clearly states a FIT was administered as a comparison here. Exact then chose not to disclose the data generated in its trial and chose to instead use an outdated 2005 FIT study done in Japan by Morikawa as the comparator test. In our experience, this type of sleight of hand is performed when a company wants to distract investors from potentially troubling results. Further, in order to make Cologuard look better, the Company chose the FIT-CHEK test as the FIT comparator in the DeepC trial, even though FIT-CHEK only uses one fecal sample and is primarily administered in doctor's offices, which is a different setting from Cologuard's. If the Company had instead used the InSure FIT, which like Cologuard is a take-home test, it would probably have doomed Cologuard. 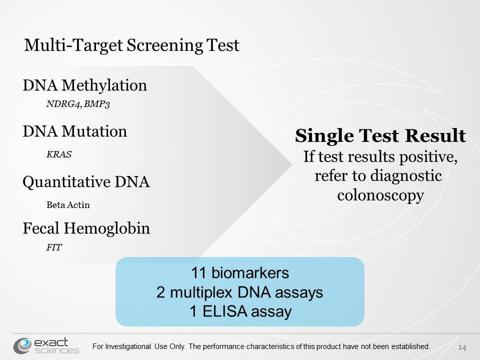 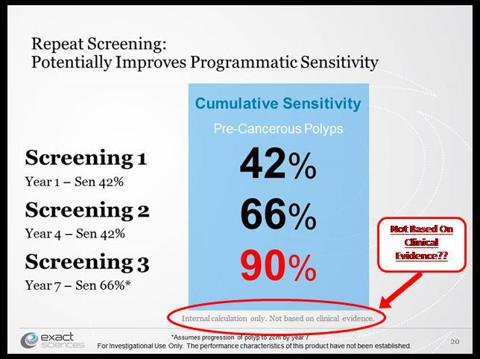 If You Thought That It Couldn't Get Any Worse…

We want to leave with one last telling sleight of hand in the information that Exact has been disseminating. We have already posted slide 18 from the June 2013 presentation above. We now highlight slide 16 from the May 2013 presentation, which can be found here. At first glance, it looks like the same slide. However, after taking a closer look, we can see that for the FIT statistics, Exact provided a range in May (with two sources). Now going back to slide 18 from the June presentation Exact drops the second source, which happens to be more recent and more favorable to the FIT, and instead simply reports the lower (and arguably outdated) end of that range. Here is a side-by-side comparison of the two slides:

We do not believe that the FDA is likely to be as easily fooled as investors. Instead, we suspect that they will ask the hard questions, such as which test is actually better, what do the true historical comparisons really show, and what did the Company's own FIT results show in the same population. We believe that as the true irrelevance of the Cologuard test comes to light, it has a high likelihood of being rejected by the FDA. In the unlikely event the test is approved, it will likely fail to gain adoption due to its poor predictive abilities. Further, we intend to submit a citizen's petition to the FDA outlining why Cologuard should not be approved.

This article, the first in a five part series, began by illustrating that regardless of the set of data that you use, the Cologuard test is inferior to the FIT. Going forward, we are excited to continue our takedown of EXAS's lofty claims regarding its Cologuard test. Next we will discuss the economics of the Cologuard test, and why they don't support reimbursement. That will be followed by a detailed argument explaining why we feel that very few doctors will actually prescribe the Cologuard test even if it gets approved. Our fourth installment will deconstruct the bull case, and explain why the Cologuard test will never be the Pap Smear. Finally, we will dive further into the facts, and explain how Exact Sciences has misled investors (again). Stay tuned.

2. Below are links to FIT data that Exact Sciences failed to mention in its June 2013 Presentation:

Disclosure: I am short EXAS. I wrote this article myself, and it expresses my own opinions. I am not receiving compensation for it. I have no business relationship with any company whose stock is mentioned in this article.

Alpha Exposure
2.89K Followers
Alpha Exposure is the pseudonym of an investor in individual stocks. He is a proponent in only investing in ideas which he can evaluate himself.