In the last reported quarter SandRidge Mississippian Trust I (NYSE:SDT) showed some signs of improvement quarter to quarter, but overall unit earnings performance of the Trust remained poor. On July 25th SDT announced its quarterly distribution for production during the time period March 2013 through May 2013. During the spring the general market showed oil prices which remained relatively high throughout and higher natural gas compared to recent trends. NGL prices improved slightly, but remained low relative to the price of crude oil.

In the context of a generally healthy market, SDT's common unit distribution of $0.61 was 20% below target. Overall earnings on a fully dilutive basis, for the 2nd quarter in a row, could not cover the subordination threshold for the Trust - so the common units received the threshold distribution while the subs received less. 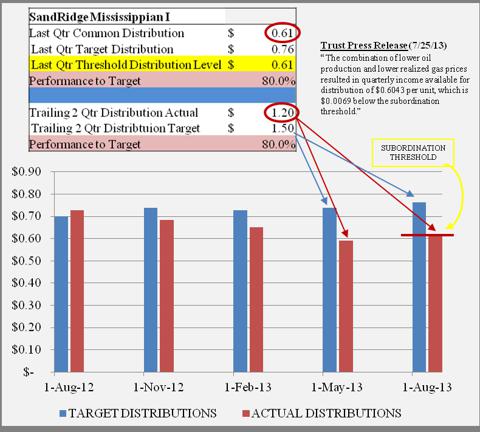 The Trust press release referenced lower realized natural price levels and lower oil production as the cause for the earnings miss. This statement is made relative to the initial Trust prospectus which projected a higher overall MBOE volume in crude oil than was eventually discovered, as well as higher natural gas prices than are currently being realized in the market.

Given my previous reports that have tracked SDT's performance (see SandRidge Mississippian Trust I - Dramatic Decrease in Well Performance Shown in Reserve Report, and Sandridge Mississippian Trust I - Poor Quarter Results Show Elevated Risk ), the ability of the Trust to only cover the subordinate threshold with earnings available for distribution is not a surprise. SDT appears to be on a course for constant 20% below target near-term, and even worse intermediate term performance relative to its IPO distribution target levels. This report provides an update of the trends and data which point to this conclusion.

In the press release announcing the Trust results, management pointed to "lower oil sales volume" than the estimate in the IPO prospectus as the reason that the distribution target was missed. The PV-10 released earlier this year in the Trust 10-K showed a sharp decrease in MBOE proven reserves of -17.9% during 2012 due to well performance and a shift in product mix in which oil was 43% of production, to an oil / NGL mix of 23.3% / 15%. This indicated a 4.7% reduction in liquid product production. 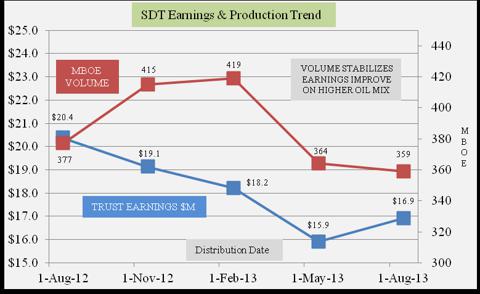 The improvement in earnings performance is primarily a result of a greater mix of liquids (crude, NGL) in production.

The IPO prospectus projected that it could take as long as to the end of 2015 to complete drilling, in which case subordination protection for common unit holders would end in 2016. Based on drilling completion the 2nd production quarter of 2013, unit subordination will end over 2 years ahead of the worst case IPO schedule.

Drilling completion in the last quarter means that subordination will end beginning with the August distribution in 2014. Investors need to be aware of this date, particularly since the Trust is not earning enough currently to fully cover the subordination threshold. If earnings do not improve over the next year, common unit holders will see a drop in distribution level this time next year below the current 80% of target threshold afforded by the subordinated unit holders. Whether a drop in distribution level occurs will depend on the earnings performance of the Trust this time next year.

The PV-10 published in the most recent SDT 10-K made a major adjustment in the Trust production mix. As shown in the graph below, the oil & gas mix was split into component oil / NGL / gas parts, and also the oil and gas mix was shifted from 43 / 57 to 38 / 62, a substantial change. 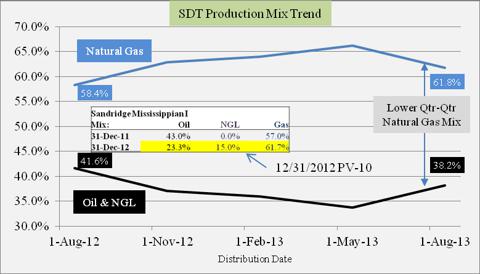 In the graph, the natural gas and oil percentage mix over the last year is plotted to see if the trend line is actually reflecting a shift to natural gas. The good news in the chart is that at least in the most recent quarter, the gas production volume has reverted back to the level reflected in the PV-10 (38 / 62). The overall result is still 3% higher in gas mix than the same quarter last year. The higher gas mix weighs on the overall Trust earnings performance.

In the graph below you can see the actual market prices for oil, gas and NGL during the past year and the last production period. 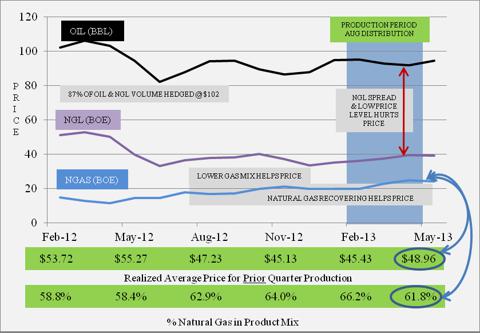 The weighted average realized price at the Trust was $48.96 per BOE in the March to May production quarter. This is a 7.7% increase over the $45.43 per BOE realized in the prior quarter. 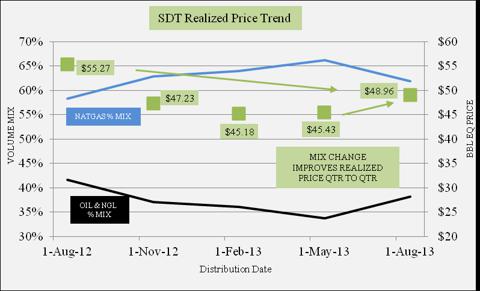 The shift in mix to more liquid production volume is the primary contributor to the improvement quarter over quarter as well as a movement up in realized gas price from $3.24 / mcf to $3.55 (post production and derivative effects). Although the increase in gas price was substantial, it will take a substantial change in natural gas market price levels to recover the loss which has resulted from the mix change since this time last year.

The Trust has oil hedges in place for a substantially all of its oil production at $101-$102 through December of 2015. It also carries hedges on approximately 20% of its natural gas volume.

The realized price levels for the latest quarter (oil $93.78, gas $3.55) contain the benefit from the hedges, adjusted for the differentials for delivery of production. The Trust forecasts a differential of approximately $5.00 in the oil price realized and the oil hedge price due to delivery basis risk. The trust oil production is estimated to be 78% WTI and 28% WTS. The substantial narrowing of the spread between the two products in the latest quarter should have benefited the Trust realized price level. However, the $93.78 realized price level is an outlier in recent performance given the hedges in place, and must be due to NGL production and the slightly under-hedged position in the quarter (production was 137 MBOE oil, estimated hedge was 123 MBOE).

The Trust has no hedge contracts in place beyond December 2015. Presently the forward price curve for oil in the 1st production quarter of 2016 $87.35, and for natural gas it is $4.32. The forward expectations for production sales price levels in the years beyond the current hedged production at the Trust show risk in the oil price curve, and generally high probability the natural gas delivery will be above $4 per mcf. (These prices do not reflect the Trust specific negative differential for underlying product delivery). As hedge expiration gets closer, this risk will need to be continually monitored to adjust expectations.

In the Trust 10-K published in early March the year end PV-10 was supplied which showed a per share value of $8.36 for the expected cash flows from the remaining proven reserves held by the Trust, discounted at 10%. The PV-10 calculation uses constant price level assumptions for the life of the proven reserves as shown in the table below: 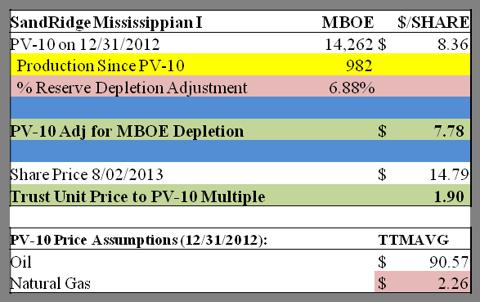 The table updates the PV-10 estimated value for the depleted production volume at the Trust since the PV-10 report was completed. The adjusted PV-10 is $7.78 per unit share.

It is estimated that increasing the natural gas price used in the PV-10 report to $4.12 would increase the current adjusted PV-10 reserve valuation to $9.38 per unit.

The PV-10 is a static price level valuation of proven reserves model. To incorporate the value of potential changes in price levels going forward, as well as the value of the derivative contracts and the subordination threshold protection for common unit holders, it is necessary to use a discounted cash flow valuation model. The information contained below in this article is based on the valuation model I utilize to evaluate the fair market value of SDT.

The table below summarizes the information used in the model to derive a go forward distribution forecast when combined with the expected depletion of remaining proven reserves held by the Trust:

The product price level assumptions in the model use price levels derived from the current forward price curve for oil and gas combined with the Trust hedge contracts in place thru the end of 2015. The out year price levels beyond the futures price level in the 1st quarter of 2016 are grown at a rate of 2.5% annually up to a cap level , which in this model are not reached before Trust termination. All prices are adjusted for delivery based on the average differential which is typically realized by the Trust.

When the price and mix assumptions are combined with the current proven reserves remaining at the Trust and the expected production curve, the distributions a unit holder can expect through the end of life of the Trust can be forecasts as shown in the graph below: 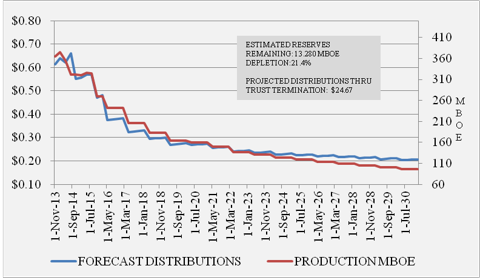 Through May of 2013, the Trust shows depletion of 21.4% of its proven reserves. Total remaining proven reserves are estimated at 13,280 MBOE as of the start of the June production period.

My fair market estimate at this time is $13.

Daniel R Moore
3.69K Followers
Daniel Moore is the creator of FinancialRelativity.com, a web portal created for the purpose of tracking the status of financial markets and providing investment analysis and portfolio management insights to investors. Based on the systematic investment research, he writes about the market and publishes his views through internet market publications. He has over 25 years of management experience in corporate finance in a variety of high technology start-ups and public companies. A graduate of Duke University’s Fuqua School of Business in 1988, he has spent the last 10 years managing investment portfolios seeking high risk reward returns for fixed income investors.