It's nice to see housing prices clearly on the rise, as shown in the chart below. It's about time, considering that housing has suffered through a four-year consolidation after three years of a terrifying decline. 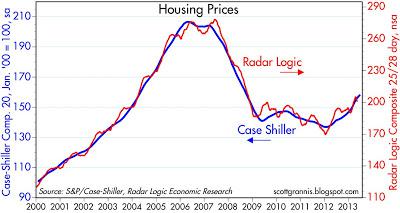 Housing starts collapsed, falling by more than 75% from early 2006 through 2009. Dramatically lower prices and an almost-complete halt to new construction were necessary to "fix" the oversupply of homes, and enough time has now passed to think that the process of recovery is finally under way. 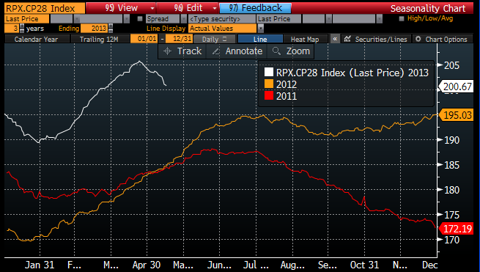 But as the chart above shows, the pace of improvement is slowing. The chart shows nonseasonally adjusted prices for 2011 (red), 2012 (orange), and 2013 (white). Prices this year are not following the typical seasonal pattern we've seen in other years -- there has been some weakness of late (April and May). This has probably continued, since we know that new mortgage applications have dropped a little over 10% in the past two months, mainly in response to a sharp increase in mortgage rates. It's going to take several months for the market to adjust to the new reality of higher interest rates. 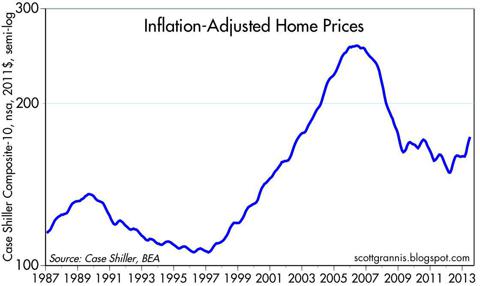 On an inflation-adjusted basis, the recent rise in home prices has been only slightly more than necessary to make up for the past several years' worth of inflation. We're seeing a recovery in nominal prices, but only a modest rise in real prices from the nominal lows of 2009. I doubt we're going to see any actual weakness in the housing market, but the recovery has lost some of its steam, so improvement in the months to come will likely be much less exciting.

Calafia Beach Pundit
55.99K Followers
Scott Grannis was Chief Economist from 1989 to 2007 at Western Asset Management Company, a Pasadena-based manager of fixed-income funds for institutional investors around the globe. He was a member of Western's Investment Strategy Committee, was responsible for developing the firm's domestic and international outlook, and provided consultation and advice on investment and asset allocation strategies to CFOs, Treasurers, and pension fund managers. He specialized in analysis of Federal Reserve policy and interest rate forecasting, and spearheaded the firm's research into Treasury Inflation Protected Securities (TIPS). Prior to joining Western Asset, he was Senior Economist at the Claremont Economics Institute, an economic forecasting and consulting service headed by John Rutledge, from 1980 to 1986. From 1986 to 1989, he was Principal at Leland O'Brien Rubinstein Associates, a financial services firm that specialized in sophisticated hedging strategies for institutional investors. Visit his blog: Calafia Beach Pundit (http://scottgrannis.blogspot.com/)