Tesla Motors (NASDAQ:TSLA) has been one of the best performing and most hotly debated stocks this year. It has risen from under $40/share to $166/ share, where it currently stands, up nearly 400% this year. This advance has caused many critics to proclaim that Tesla is way overvalued and is due for a crash. Comparisons to Apple (AAPL) at $700 abound, yet shorts have been frustrated by the seeming relentless drive upward. Tesla is a highly volatile stock and one that could drop greatly, but I believe that many shorts are approaching this from the wrong angle. 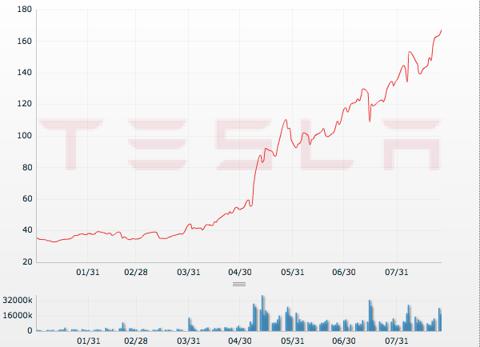 The main case from shorts is that the stock is wildly overvalued. Granted, there have been some that have approached it from the fundamental side, suggesting that the company would struggle to maintain margins. By far, however, the short thesis is that "this stock is really, really expensive." Those that are shorting Tesla only for these reasons, should listen to what brilliant short seller John Hempton of Bronte Capital has to say about this very topic. Hempton on valuation shorts:

In a valuation short we are working on the same information as everyone else has. This makes me uncomfortable. There is an arrogance in suggesting we can analyze the information better than anyone else. We find it harder to answer the question of what we see when others don't and hence harder to justify the position at all. (...) Anyway - I am uncomfortable because I can't describe my informational edge and I don't like thinking I am smarter than other people (as opposed to better informed than other people).

This is critical to understand for Tesla shorts. Unless you are doing something that I am not aware of, in this case you do not have better information than the market. While I don't believe that market is totally efficient (far from it), Tesla shorts should be aware of (and most likely are) that the market can remain irrational far longer than they can remain solvent in the words of Keynes. 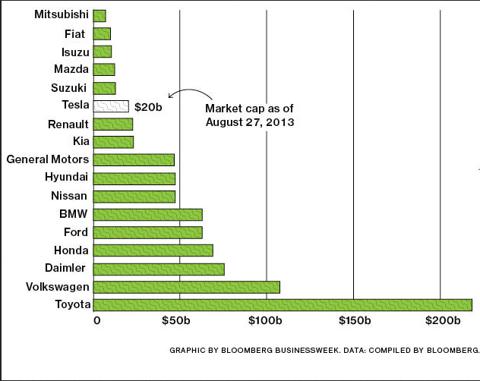 Of course, this chart does not tell the whole story, as it does not account for the number of cars sold. So far this year in California,

Tesla is the third best selling car in the Luxury and Sports segment in California this year, selling 4714 Tesla Model S cars. Still this is only California, for a better overview, we need to see broader trends. For the sake of this argument, I will only include more direct competitors (Audi, BMW, and Mercedes.) 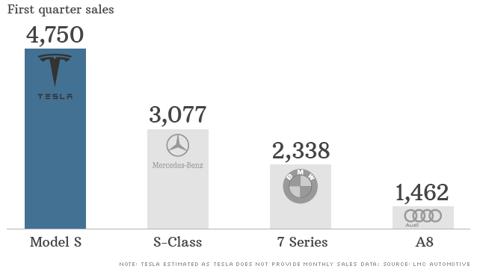 While this isn't a perfect example, as BMW, Mercedes, and Audi all have many other models, it does give you a good idea of how Tesla stacks up against at least the competing cars in the Tesla Model S segment. (Sport/Luxury). 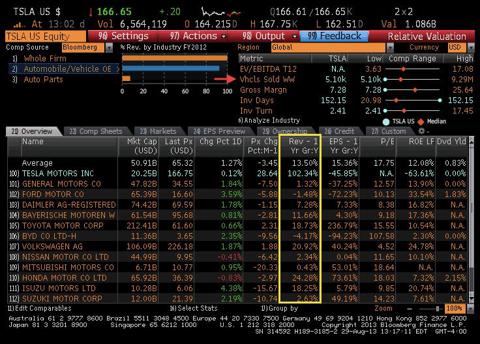 Tesla is up for three reasons. A massive short squeeze, incredible revenue growth, and momentum traders piling into the stock. Ultimately, Tesla is up because it is where the growth is, revenue growth at least. The other thing to note is that Tesla's vehicles sold number in the top right. Tesla is the low number in this group, obviously due to the fact that it currently only has one car.

Analysts are expecting earnings to catch up with revenues by June 2014. I know that many will call foul on this, saying that the analysts are wrong and Tesla is like Apple at $700. 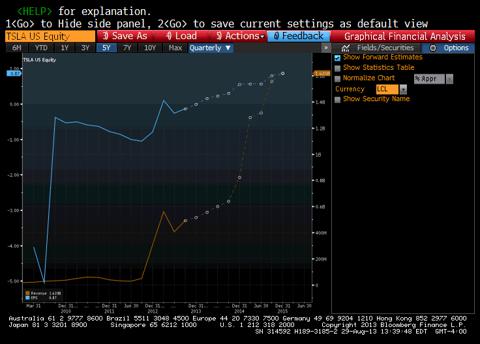 Before you say that analysts are wrong, remember that you could have made the same case for Amazon (AMZN) and would have lost a lot of money if you had shorted it.

Tesla is obviously a very hyped up stock, and not one that I would buy at current levels. I was lucky enough to purchase it on the pullback when Goldman Sachs issued a negative report. I think that with a stock like Tesla, if you are willing to buy a big dip I think you will be rewarded in the long run. Tesla is clearly a speculative investment, but with a powerful CEO that is incredibly driven to deliver, a car that is the safest car out there, and a car that Consumer Reports gave its highest ranking ever to; it is clear that the future is bright for Tesla. Whether or not it can capitalize on that brightness is the question, but I believe that it can.

Disclosure: I am long TSLA. I wrote this article myself, and it expresses my own opinions. I am not receiving compensation for it (other than from Seeking Alpha). I have no business relationship with any company whose stock is mentioned in this article.