I finally got around to reading the interview with Neil Howe, the co-author of The Fourth Turning. In the book, he outlines his approach to generational research:

We think that generations move history along and prevent society from suffering too long under the excesses of any particular generation. People often assume that every new generation will be a linear extension of the last one. You know, that after Generation X comes Generation Y. They might further expect Generation Y to be like Gen X on steroids – even more willing to take risk and with even more edginess in the culture. Yet the Millennial Generation that followed Gen X is not like that at all. In fact, no generation is like the generation that immediately precedes it.

Instead, every generation turns the corner and to some extent compensates for the excesses and mistakes of the midlife generation that is in charge when they come of age. This is necessary, because if generations kept on going in the same direction as their predecessors, civilization would have gone off a cliff thousands of years ago..

In our research we have found that, in modern societies, four basic types of generations tend to recur in the same order.

He then outlines the four generational archetypes and believes that America is undergoing a generational shift. To demonstrate his point, he goes back into American history and shows examples such as the generational shift between the leadership of Abraham Lincoln and Ulysses S. Grant. He goes on to postulate what that may mean for American society and, by extension, the investment implications of that shift.

Torturing the data until it talks?
Among quants there is a saying that goes “don’t torture the data until it talks”, which is another way of saying don’t over-fit the data. While Howe & Strauss’ analysis is very intriguing, I find many disturbing signs of data fitting that make me uncomfortable.To my mind, here are some questions that need to be answered in order to validate the analytical approach and methodology.Where are the women?The research authored by Howe & Strauss goes back in American history and shows a number of examples of generational shifts. The archetypes cited are invariably male. While that may have been valid in the past, women have taken a greater leadership role in American society and their influence is growing. Mark Perry at Carpe Diem shows in the accompanying chart that there is a distinct male-female gap in post-secondary education, which should result in shifts in gender leadership over time: 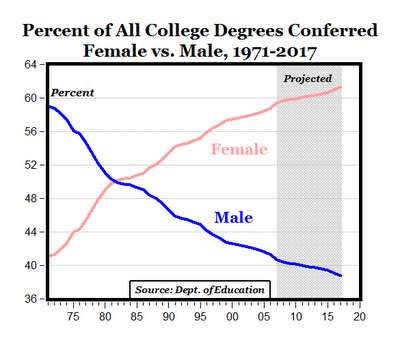 NBER’s research also cites the same kind of gap across OCED countries and not just in the United States, excerpt here [emphasis mine]:

The decline in the male-to-female ratios of undergraduates in the past 35 years is real, and not primarily due to changes in the ethnic mix of the college-aged population or to the types of post-secondary institutions they attend, the authors assert. The female share of college students has expanded in all 17 member-nations of the Organization for Economic Cooperation and Development in recent decades, so much so that women now outnumber men in college in almost all rich nations.

My question is: How does the rising female influence of events affect these cultural archetypes?

Other demographics
This approach to generational research is valid if the dynamics of the underlying population are relatively stable. However, demographic studies indicate that the United States is about to undergo a demographic shift away from a white population to a more Spanish speaking mix. What does that do the assumptions of the study?

While we are on the topic, what about the immigrant experience? True, the mythic status of America has been the land of immigrants; how does immigration and the emerging leadership of the immigrant class affect the generational shift thesis? There is a recent article in Canada’s Globe and Mail entitled If are a new Canadian you go to university. The article cites a study that details the degree of post-secondary education by different immigrant groups by ethnicity.

If there is all this ethnic demographic shift and shifts in education going on, by gender and by new immigrants, how strong is the generational shift thesis?

Is the analysis portable to other countries and cultures?
In the book, the authors call this a study of Anglo-American history and culture. If we were to focus on the first word Anglo, does that template of generational research refeto Britain? What about other English speaking former British colonies with predominantly Anglo rooted cultures such as Canada, Australia and New Zealand? If not, what is it that makes the American experience so unique that this form of analysis cannot be transported to other countries and cultures?

Quants call this approach out of sample testing. Can this template of generational research be applied to other cultures? What about other cultures with long histories? Some that come to mind include China, India, Japan, Russia, France, Italy and Greece.

Howe & Strauss vs. Ferguson
By contrast, economic historian Niall Ferguson's analysis of current events appear to be more robust and compelling. Ferguson reaches back into history, across countries and cultures to find similarities to today. He finds parallels in the current Sino-American relationship with the Anglo-German relationship before the World War I. He has also indicated that America's precarious financial position is similar to the position of the Ottomans at the dusk of its empire.

The conclusions of Howe & Strauss' analysis is intriguing as it represents a tempting lens into the future. However, until the questions that I raised can be answered, it just looks a lot like an attempt to over-fit the data.

Cam Hui, CFA
5.95K Followers
Mr. Hui has been involved in the equity markets since 1980, both on the buy side and the sell side. He is a CFA Charterholder, and has presented numerous papers to quantitative discussion groups (Sample topics include: How Global are Resource Sectors).