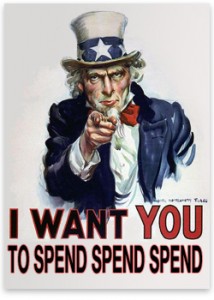 There seems to be a lot of agreement that the positive GDP report for Q3 was in retrospect not as positive as the headline number might lead one to assume. Coupled with the disappointing personal income data on Friday as well as the sales numbers and many seem to have concluded that we’re still deeper in the woods than we think.

Henry Blodget has a nice short post on this subject with some good links that I recommend. Other than that, I don’t want to spend much time merely echoing points of view with which I find myself in agreement, rather let me offer another observation.

Recall if you will that when the shape that any fiscal stimulus plan should take was being debated there was a sharp divide as to whether it should be accomplished via tax policy or direct government spending. A lot of the discussion was centered around multiplier effects with many arguing that government spending represented a better bang for the buck.

The tax advocates argued for broad based tax relief and some of the proposals suggested a suspension of the payroll tax, tax credits for businesses that increased employment, accelerated depreciation for new equipment purchases as well as a cut in personal and corporate taxes. Of course, those in favor of government spending won the debate.

We may now be seeing the fruits of that decision. The problem isn’t so much that direct fiscal stimulus is better or worse than a tax reduction approach as it is that the former allows the political class to get their hands on the money as it flows through the government coffers and direct it those whom they support or perhaps it would be more correct to say those that support the politicians.

To be sure, tax policy can be narrowly focused as well and in fact it was tax policy — the new homebuyer tax credit — that drove the increase in residential investment. That doesn’t necessarily mean that a tax focused approach to stimulus would result in the same distortions, just that the denizens of Capitol Hill are capable of corrupting just about anything if given the chance.

One of the more vexing problems that afflicts the human race seems to be its inability to learn anything from past lessons. We spent the better part of the twentieth century proving that centrally planned economies don’t work. It seemed pretty clear by the ’90s that generally speaking letting people and the market make their own choices resulted in an optimal economic outcome and the best application of scarce resources. Did we learn the lesson? Of course not.

The upshot has been that we now have a “recovery” that’s so far been driven by improved performance in the residential real estate and auto sectors based on extraordinary stimulus directed towards those areas. More to the point, much of the improvement may well be illusory. It isn’t so much a testament to good government policy as it is an example of Americans jumping on a temporary sales promotion. Like 0% loans, the showrooms get flooded so long as the deal lasts and when it ends, the buyers stay home and play a game of chicken with the sellers, daring them not to bring it back.

Would we have been further towards real recovery if the stimulus had been more tax oriented? Who knows. I think it is fair to say, however, that any progress might have well been more substantial had it relied on broad based tax reduction. I doubt that we would be having discussions about auto sales cratering and the real estate market falling once more once the props are removed from them. Rather, we would most likely be seeing upticks throughout the economy and had tax cuts been used to promote employment we might well be witnessing much better numbers on that front.

The enduring lesson is that no matter how dire the situation, politicians will see to their interests first and those of the nation thereafter. Any stimulus program will involve a great deal of waste. A stimulus program that relies on significant control of expenditures by the ruling class will result in maximum waste and inefficiency.

Or to put it another way, politicians will eviscerate any multiplier effect if you let them get their hands on the money.

Tom Lindmark
452 Followers
About a year ago, a company asked me to write a daily blog for them. I told them that I’d never read a blog and had absolutely no idea how to write one but sure, if you want to pay me for it, I’ll give it a shot. It was either my good or bad fortune to start at the beginning of the credit crisis. Good because there was a lot to write about, bad because they didn’t really want me to chronicle and opine on the disaster of the day. Guess who won that standoff. But I was hooked on blogging, so I started my own blog, called it But Then What and here we are. I’m not sure that credentials mean much when it comes to writing about things but people seem to want to see them, so briefly here are mine. I have an undergraduate degree in economics from an undistinguished Midwestern university and masters in international business from an equally undistinguished Southwestern University. I spent a number of years working for large banks lending to lots of different industries. For the past few years, I’ve been engaged in real estate finance – primarily for commercial projects. Like a lot of other finance guys, I’m looking for a job at this point in time. Given all of that, I suggest that you take what I write with the appropriate grain of salt. I try and figure out what’s behind the news but suspect that I’m often delusional. Nevertheless, I keep throwing things out there and occasionally it sticks. I do read the comments that readers leave and to the extent I can reply to them. I also reply to all emails so feel free to contact me if you want to discuss something at more length. Oh, I also have a very thick skin, so if you disagree feel free to say so. Enjoy what I write and let me know when I’m off base – I probably won’t agree with you but don’t be shy. Visit my blog http://www.butthenwhat.com or follow me on twitter at twitter.com/tomlindmark.