Agilent Technologies (NYSE:A), a worldwide provider of bio-analytical and electronic measurement solutions and services, recently announced its plan to separate the company into two publicly traded companies. On September 19, 2013, the board of directors approved the spin-off of the company's Electronic Measurement Group, or EMG, and the life sciences, diagnostics and applied markets, or LDA, businesses.

Management feels the two segments need a focused approach for greater growth and shareholder returns. Also, the conglomerate's diverse businesses make it difficult for investors to understand the value proposition of the company. Therefore, we start with understanding the company's business model, and later we will discuss the implication of separation for investors.

Due to the soft communication sector demand and sequestration, EMG is facing a challenging economic environment, which has negatively impacted the group's revenue. In the third quarter ended in July 2013, the segment reported a revenue decline of 17% year-over-year. In the third quarter, the segment accumulated orders worth $674 million and generated revenue of $701 million. 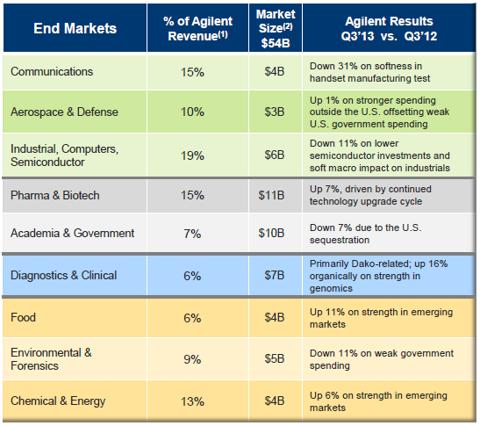 So what differs after the separation

It's all about focus; the electronic measurement group will separate from Agilent with a strong management team and solid capital structure to thrive as a stand-alone company. The management plans to expand its operations across the world aggressively in fast growing segments like wireless communication, while continuing the effort to grow its share in the oscilloscopes market.

The LDA group has performed well in the past, and the management will maintain the focus to grow the organic revenue in its core instruments businesses, which are witnessing good demand in the market. It will also capitalize on its Dako and Varian acquisitions, while expanding into new geographies to tap the growth in emerging markets.

What's there for investors?

The separation is expected to be complete by the end of calendar year 2014. After the spin-off, both companies will have a greater focus on the distinct businesses of LDA and EM group. The company will be able to properly allocate resources for the higher growth LDA group. We expect the split to unlock the proper valuation for the LDA group, which is affected by the cyclical poor performance of EM group. Also, the new company formed out of EM group will be able to focus on the growth areas organically or inorganically that will help it to improve its performance. 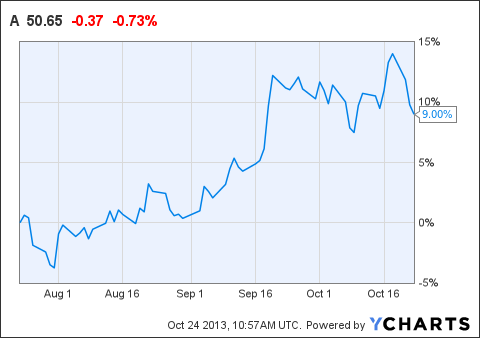 A data by YCharts

After the separation, current shareholders of Agilent will own shares in two separate companies which are focused solely on their own operations. The news of split has positively impacted Agilent's stock price, and in the last three months, the stock grew by 9%. Historically, we have seen that Agilent has transformed its businesses into successes; it is originally a spin-off unit from Hewlett-Packard in 1999.

The third quarter data clearly demonstrates the increasing demand for LDA group's specialty instruments, and looking at the past trends, we expect the demand to rise further. At the same time, with proper resource allocation and a focused growth strategy, the performance of the EM group will also improve. Investors who weren't able to value Agilent confidently due to its exposure to two different businesses now have new and focused companies with proper valuations to consider. We expect the split will increase the demand for the stock of both the companies from new investors, which will put upward pressure on the stock price.

Other Spin-off that worked

In past few years, we have seen some big pharma companies spinning off a division and turning it into a separate entity to achieve better growth for the shareholders. The recent example is Abbott's (ABT) spin-off. On January 1, 2013, Abbott Laboratories split into two companies with two different publicly traded stocks, Abbott and Abbvie (ABBV). Abbott is a medical device, diagnostics, and nutritionals company, while Abbvie is the drug manufacturing company. Since the spin-off, Abbott's stock has given a yield to date, or YTD, of 16.35%, and Abbvie has given a YTD of 37.61%. This clearly reflects investors' confidence in the spun-off drug manufacturing division, Abbvie, which has better growth potential. The split has unlocked the true valuation of Abbott's spun-off division, Abbvie.

After the separation, the EMG business will become a separate publicly-traded company, while the LDA business will remain under the Agilent name. The spin-off makes sense, as it reduces the company's exposure to the cyclical market of EMG and its poor performing defense segment, which was hit by sequestration. After the separation, the new Agilent will be a pure-play life science entity and will be able to dedicate its resources effectively to areas with solid growth prospects that are less affected by adverse macro environments. Also, we expect with the strategy of expanding into new geography will minimize the impact of the economic cycle, and it will improve the performance of the newly formed EM group. In the past, we have seen the spin-off of Abbott, which has helped the company to unlock its true valuation, and the stock of both companies experienced upward movement. We expect Agilent's stock will also experience a similar upward movement after the spin-off.

Additional disclosure: Fusion Research is a team of equity analysts. This article was written by Satya Prakash, one of our research analysts. We did not receive compensation for this article (other than from Seeking Alpha), and we have no business relationship with any company whose stock is mentioned in this article.

Fusion Research
1.04K Followers
Fusion Research is managed by a team that has been actively involved in the financial research industry for over 5 years. Our business is rooted in principles of trust, integrity and fundamentals-driven markets. We provide independent research, on deserving public companies without the built-in conflicts of interest. Our team of equity analysts have extensive experience, and are highly qualified and credentialed CFA's, CA's or MBA’s. The research we provide is unbiased as any on the market. We create strategic partnerships with companies and firms to gain unprecedented domestic and international following of our coverage. Our reports are used by both institutional and individual investors to obtain accurate, independently-compiled securities analysis.