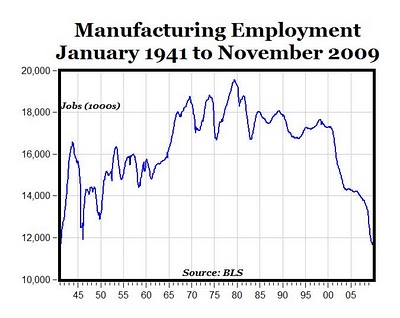 But what about manufacturing output? That news is a little better. The chart below shows the decline in manufacturing employment plotted against the Gross Value of Final Products and Nonindustrial Supplies (in billions of constant 2000 dollars), as calculated by the Federal Reserve (data here). In the thirty year period between 1977 and 2007, U.S. manufacturing output doubled from $1.5 trillion to $3 trillion, before dropping to a ten-year low in June 2008 of $2.6 trillion, from the contractionary effects of the recession. Manufacturing output has been rebounding lately and it increased in four out of the last five months, after falling in ten out of the previous 11 months, signalling that the economy moved from recession to expansion in the middle of the year. 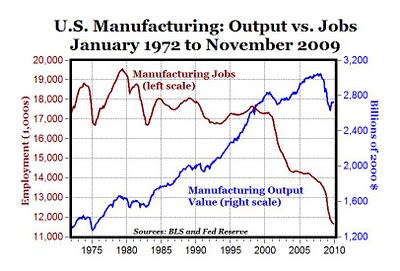 Workers today produce twice as much manufacturing output as their counterparts did in the early 1990s, and three times as much as in the early 1980s, thanks to innovation and advances in technology that have made today’s workers the most productive in history.

Bottom Line: At the same time that manufacturing employment has been declining to record low levels, manufacturing output keeps increasing over time (except during recessions of course), and the amount of output that each manufacturing worker produces keeps rising almost every month to new record high levels. Manufacturing productivity has never been higher, and that's good news. 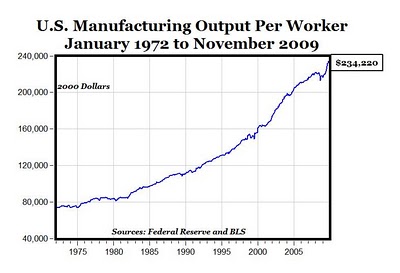 Mark J. Perry
939 Followers
Dr. Mark J. Perry is a full professor of economics at the Flint campus of The University of Michigan, where he has taught undergraduate and graduate courses in economics and finance since 1996. Starting in the fall of 2009, Perry has also held a joint appointment as a scholar at The American Enterprise Institute. Perry holds two graduate degrees in economics (M.A. and Ph.D.) from George Mason University and in addition, and has an MBA degree in finance from The University of Minnesota. In addition to an active scholarly research agenda, Perry enjoys writing op-eds for a general audience on current economic issues and his opinion pieces have appeared in most major newspapers around the country, including USA Today, Wall Street Journal, Washington Post, Investor’s Business Daily, The Hill, Washington Examiner, Dallas Morning News, Sacramento Bee, Saint Paul Pioneer Press, Miami Herald, Pittsburgh Tribune-Review, Detroit News, Detroit Free Press and many others. Mark Perry has been best known in recent years as the creator and editor of one of the nation’s most popular economics blogs, Carpe Diem. Professor Perry has written on a daily basis since the fall of 2006 to share his thoughts, opinions and expertise on economic issues, with a strong emphasis on displaying economic data in a visually appealing way using graphs, charts and tables.
Follow
2 Comments