Investigative financial reporter Teri Buhl says hedge funds are scrambling to put as much distance as possible between themselves and the increasingly radioactive SAC Capital, which is rumored to be the next target of the FBI's crackdown on insider trading. According to Buhl, this includes purging email exchanges with SAC.

Funds like Blue Ridge, Greenlight, Third Point, Glenview, and Maverick are cutting back on any contact with [SAC Capital's Steve Cohen]. When we asked major players such as [President of hedge fund Kynikos Associates] Jim Chanos and others if they’ve been pinging Stevie about a trade lately, you'll get a very defensive 'no.'

...Extra measures are being taken to hire data-miners to comb through any and all emails firms and their trading consultants ever sent to anyone at SAC in an attempt to erase them from internet memory.

If true, hedge funds Third Point and Kynikos will find it quite impossible to delete all their correspondence with SAC, given DeepCapture.com possesses several emails which, it just so happens, implicate all three funds in insider trading of a different sort; specifically, influencing and trading ahead of an analyst's report.

Here's the short version: in late 2002, a group of short-selling hedge funds, led by Kynikos Associates, learned from a Morgan Keegan analyst that he was preparing to initiate very pessimistic coverage of Canadian insurance company Fairfax Financial Holdings (NYSE:FFH). Kynikos promptly alerted SAC Capital and Third Point Partners about this prime shorting opportunity. In the days that followed, traders at Kynikos and SAC met with the analyst, reviewed and offered input on drafts of his forthcoming report, and, together with Third Point Partners, built up large short positions in Fairfax, which they very profitably covered following the report's publication.

In one particularly telling email, a SAC trader sends an email to Steve Cohen himself, in which he explicitly states that SAC will cover their Fairfax short position following the Morgan Keegan report's publication.

Here's the long version: Fairfax Financial Holdings was first listed on the NYSE on December 20, 2002. During its first 15 trading days there, volume averaged well under 180,000 shares. 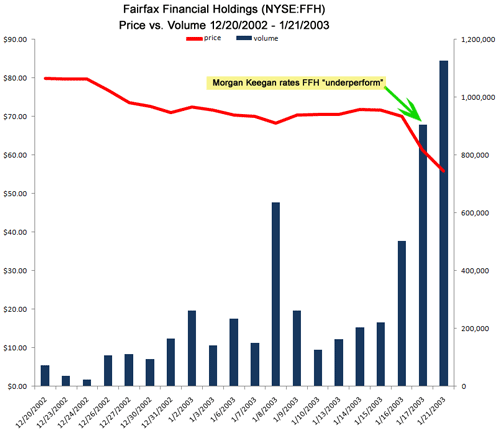 Then, on January 16, 2003 FFH volume exceeded 500,000 shares on an otherwise uneventful day in the life of a Canadian insurance company. [ image]

The next day, January 17, 2003, Morgan Keegan analyst John Gwynn initiated coverage of FFH with a scathing report and rating of “underperform”, making for one of the more eventful days in the lives of Fairfax shareholders, as their investments took heavy losses on extremely high volume.

Because information drives markets, one would expect to see extra activity in the wake of new information, such as that introduced by Gwynn on the 17th.

But what accounts for the unusually high volume observed the day before Gwynn’s report was published?

The answer to that question would come in October of 2008, when Morgan Keegan announced that Gwynn had been terminated for sharing his unpublished research on Fairfax with a small group of short-selling hedge funds.

Gwynn's termination appears to be linked to the lawsuit Fairfax filed against several firms, including SAC, Third Point and Morgan Keegan, alleging racketeering.

Email and trading data obtained through discovery in that suit confirm that hedge funds Kynikos, Third Point, and SAC Capital all traded ahead of this material, non-public information.

It all started on December 11, 2002 when Kynikos employee Mark Heiman alerted Chanos that he had just learned from an analyst at Ziff Brothers Investments that a Morgan Keegan analyst was about to publish a negative report on Fairfax.

The next day, Kynikos employee Matt Cantrell apparently contacted Gwynn, as he sent Ting several documents relating to Fairfax subsidiaries, with the comment, “John Gwynn believes these might be of interest to you.”

Four days later, Heiman spoke to Gwynn personally, having a conversation which he summarized in the following report to Chanos:

From: Mark Heiman (Kynikos Analyst)
Sent: December 16, 2002 4:46 PM
To: James Chanos (Kynikos President), Douglas Millett (Kynikos COO), Charles Hobbs (Kynikos Managing Partner)
Subject: Fairfax
-------------------------------------------------------------------
Just spoke to John Gwinn at Morgan Keegan, and he was more critical of FFRX than I've ever heard a sell side analyst. It looks like his criticisms of from the top to the bottom--everything from underwriting to accounting to dishonesty. He gave me his basics, as he is somewhat restricted because he hasn't officially launched. It will be interesting to see how much of this the people who run the research department there will let him publish!

The day after Fairfax began trading on the NYSE, Gwynn’s revelations became much more explicit as he shared with Kynikos employee Heiman portions of his forthcoming report on Fairfax.

In the days to follow, Gwynn and SAC Capital Portfolio Manager Forrest Fontana held a face to face meeting where they discussed Fairfax.

Fontana followed up on that meeting via email to Gwynn:

Fontana proposed a conversation the following day and requested a spreadsheet summarizing Gwynn’s analysis on Fairfax, which Gwynn promised to send.

On January 13, 2003 Fontana sent his boss, Steven A. Cohen himself, a summary of his planned activities for the week, which included:

Tuesday 1/14: Morgan Keegan expected to launch on Fairfax with sell rating - we will be covering into this.

As it turns out, Gwynn’s report was published on the 17th of January, not the 14th as Fontana expected. Still, it’s clear that SAC Capital was formally planning to trade ahead of the information received by Gwynn.

Trading records produced by Kynikos and Third Point all tell the same story: heavy short selling in anticipation of Gwynn’s report, and highly profitable short covering in the days that followed.

What did John Gwynn get out of all this? That’s unclear, though upon his firing, Morgan Keegan went to great lengths to say that Gwynn’s opinions were his own and not influenced by the hedge funds that profited from advance knowledge of them. We'll likely never know more than that, as Gwynn reportedly passed away earlier this year.

The next question is: did Morgan Keegan get anything out of this arrangement?

Apparently, that's how big hedge funds like Kynikos operate, which makes Chanos, who is also head of the Coalition of Private Investment Companies, the logical person to lobby Congress as that body considers long-overdue reforms.

A few weeks after these emails were initially published on DeepCapture.com almost one year ago, the Wall Street Journal reported, "The Securities and Exchange Commission is investigating whether several hedge funds traded improperly after being given advance notice by a research analyst of his negative report on a prominent insurer."

At the time, I made it clear that if anything became of that investigation, I would publicly eat my hat...not because of a lack of evidence of wrongdoing on the part of these hedge funds, but because -- consistent with its status as a captured regulator -- it goes against the SEC's culture to take action against big players.

Nearly a year has passed, and my hat remains intact.

The good news is, I'm unwilling to make any such bets now that the FBI is on the case. I've followed the work of agent BJ Kang ever since he testified against hedge fund dirty trickster Spyro Contogouris (also named in the Fairfax suit), and get the imprpession Kang is everything the SEC is not: mission-focused, determined and incorruptible. In short, these abusive short selling hedge funds have every reason to be worried now that a real law enforcement agency is scrutinizing their actions.

Judd Bagley
14 Followers
Judd Bagley is a former journalist who has spent the past three years investigating short-side stock manipulation. It started out as a hobby. Now it's his job.