Valuing Netflix (NASDAQ:NFLX) is extremely difficult. This is because the company has found many clever ways to inflate its earnings and free cash flow, making the stock look less overvalued than it actually is. That is why in this article I will focus on examining Netflix's true earnings power, so investors can use this information to determine a more appropriate value for the stock.

Profitability is an Accounting Illusion

I can understand how an inexperienced investor, or at least one who does not have a firm grasp of accounting, would be fooled by Netflix's financial performance. This company has consistently reported a profit, as can be seen from these net income numbers below:

However, wiser and more experienced investors do not fall for these accounting tricks. Once we dig deeper into Netflix's financials, we begin to uncover some major red flags.

As most investors already know, Netflix is in the business of purchasing streaming content and giving its subscribers access to it for a small monthly fee. This content is eventually amortized (which appears as an expense on the income statement).

In a rapidly growing business such as Netflix, amortization will always lag cash outlays. This is what allows the company to look more profitable in the short term than it actually is. The chart below compares the amortization of streaming content to the actual cash spent to acquire streaming content: 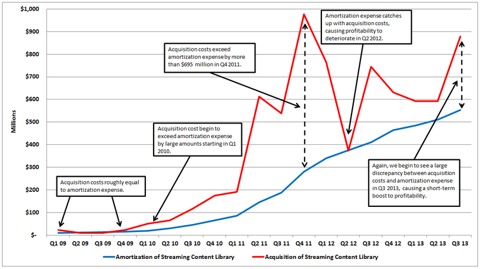 Note that during 2009, the two line parallel each other closely, which makes sense: the amount Netflix spends to acquire content should be amortized over time. In fact, over these four quarters, the amount amortized is 88.7 percent of the total amount spent acquiring content.

However, starting in 2010, the two lines diverge sharply, as Netflix began paying large amounts for content. In total, year over year acquisition costs rose nearly 533 percent (from $64 million to $406 million), yet, strangely, amortization of streaming content library rose only 228 percent (from $48 million to $158 million).

In 2012, the two lines once again converge, this, coupled with a slowdown in revenue growth, caused profitability to suffer. Acquisition costs rose just over 8 percent (from $2.32 billion to $2.52 billion), while amortization of streaming content library rose nearly 128 percent (from $699 million to $1.59 billion).

During the most recent 12 months, Netflix spent a staggering $2.70 billion on streaming content. If we apply the 88.7 percent average ratio between amortization and cash outlays to this, then amortization would have been $2.39 billion, $377 million more than the $2.01 billion Netflix actually amortized. To put this $377 million in perspective, recall that Netflix's TTM net income was only $72 million.

The only way Netflix can remain profitable is if its streaming revenue growth keeps pace with the growth in amortization of its streaming content library, although this has not been the case during the last two years.

In five out of the last seven quarters, amortization costs have grown much faster than streaming revenue. At this rate, it will be virtually impossible for Netflix to remain profitable in the long run. Anybody who thinks differently is delusional!

Most investors will agree that free cash flow is superior to net income, since it is more difficult to manipulate. While this is true most of the time, Netflix is certainly an exception. However, before we go any further, let us first examine the company's historical free cash flow:

As can be clearly seen, Netflix's free cash flow has deteriorated significantly in recent years. Nevertheless, as we will soon see, this is only the "tip of the iceberg." I will prove (using a simple example) that Netflix's true free cash flow is a lot worse than anyone could possibly imagine.

For instance, in 2011 Netflix generated $183 million in free cash flow. During this same year, the company spent $2.32 billion to acquire new streaming content, however, only $857 million of this amount was the actual cash outlay for this content (the rest, or about $1.46 billion, simply became a liability on the balance sheet). 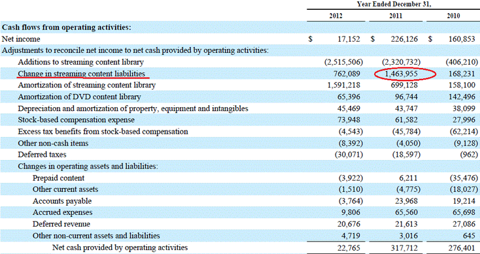 Over the last few years, Netflix has been able to take advantage of various accounting rules to temporarily inflate its net income and free cash flow. However, once the company's revenue growth slows down, which will happen sooner rather than later, it will no longer be able to hide its deteriorating profitability and its share price will suffer as a result. This stock is one of the best short-selling opportunities in years!