In the September issue of Euromoney, Peter Lee has a huge investigation into what he calls "the great bond liquidity drought". The landing page for the story features subscriber-only links to the whole thing, as well as free-to-access links to various sections. But it also neatly summarizes the problem in a single paragraph:

Liquidity is drying up across the bond markets. Regulations designed to curtail banks' leverage have had the unintended consequence of also sharply reducing their ability and willingness to make markets in corporate and even government debt. New regulations on the leverage ratio that will reduce banks' repo funding books threaten to make matters even worse and to spread the drought from credit markets to rates, the underpinning of all financial markets. Secondary markets are close to a breakdown that will soon imperil the primary markets on which companies and sovereigns depend for funding. All that is masking the decay is the extraordinary actions of central banks.

Here's a chart from Citigroup which helps show at least part of the story: 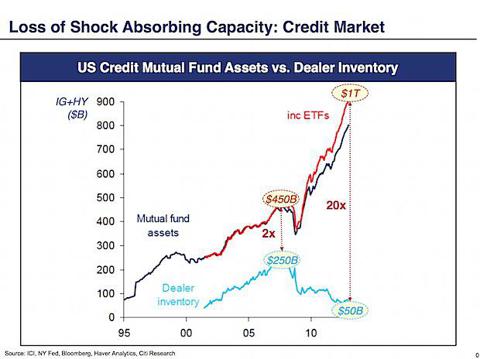 This chart doesn't just cover Citigroup (C), it covers all bond broker-dealers. They massively increased their inventory of bonds during the 2000s bubble - but so did everybody else: total credit assets were raising substantially over that period. Then, after the financial crisis, came the great divergence. Broker-dealers retreated from the market, even as investors continued to seek the safety of bonds. So while broker-dealers were about half the size of the credit mutual fund industry in 2007, according to the quantity of assets they owned, today they're only about 1/20th of the size. And those broker-dealers are still the only real liquidity providers in the market. If you want to buy or sell a bond on the secondary market, there's really only one way to do it: phone a bunch of broker-dealers, ask them to make you a market, and either accept the best price you find, or don't.

Lee's article makes a very strong case that the only way out of this problem is for buy-side institutions to start trading directly with each other, since the broker-dealers have enough to be able to provide good service only to their very best clients. But neither of the two buy-side bond market giants (Blackrock (BLK) and Pimco) seems to have been able to make such a system work, and although the MarketAxess system is growing fast, there isn't going to be any fundamental change unless and until bond investors start making buy/sell markets of their own. Which is simply not going to happen: bond investors don't tend to think in terms of opportunistic trading, precisely because their portfolios are so illiquid. What's more, the ability to make a two-way market is contingent on the ability to buy one name when you sell another, which is not something anybody can reliably count on being able to do any more.

In other words, we're living through a vicious cycle: the less liquid the market gets, the less ability there is for anybody to make markets, which in turn just worsens the liquidity problem. And things are only going to get worse still if and when QE goes away.

The implications, as Lee says, are enormous. The whole point of bonds is that they're tradable: you don't need to hold them to maturity. But increasingly you do need to hold them to maturity, since finding a buyer for your inventory is extremely difficult - especially if you're investing in size. This is one reason why the two big bond investors arguably pose a systemic risk: if either one of them were to suffer substantial withdrawals, the selling pressure on the market would be so enormous that the entire bond market could pretty much cease to work. It's already extremely difficult for bond funds to grow without changing their risk profile: while it's possible to buy large positions in the primary market, it's basically impossible to continue to add to those positions as your fund increases in size.

Part of the problem is the degree to which the market is fragmented: GE has more than 1,000 separate bond issues, while Citigroup has almost 2,000. (Both of them, of course, have only one equity security outstanding.) But there's little incentive for companies to issuer fewer separate bonds, since the primary market is the one place where the bond market actually seems to work. And besides, if the bond market becomes harder to navigate, companies always have the option of going to the loan market instead, or raising equity instead of debt.

For sovereigns, however, the fate of the bond market is of paramount importance: they have to be able to issue debt, even as major banks are withdrawing from the markets entirely. And sovereign bonds are being hit just as badly as corporate bonds by the liquidity drought:

Traders say that without moving the price the markets might still absorb a large customer order for €250 million in German Bunds, maybe €100 million in French government bonds, perhaps €50 million in Italy and €25 million in Spain.

In Portugal, which has no direct market access of its own, Lee adds, it's almost impossible to buy a position of any size at all without moving the market, with even the benchmark 10-year bond gapping out as much as 100 basis points on minimal underlying volume.

The result is that the bond market is going to have to contend with more than just rising rates over the next few years: it's going to have to deal with rising illiquidity premiums as well. A bond yield will be the benchmark rate, plus the credit spread, plus the illiquidity premium, and it's going to become impossible to disentangle the last two variables, especially when benchmark government bonds themselves are often quite illiquid. The effect on aggregate global borrowing costs could add up to trillions of dollars, and severely crimp the ability of the bond markets to finance growth.

Still, over time, those extra trillions of dollars are going to find their way into the pockets of bond investors: an illiquidity premium is still a premium. It's never nice to see rates rise, but once they've risen, the extra yield will surely be very welcome to savers. And for the time being, at least, borrowing costs are not really a problem for most issuers with market access. If companies have to pay an extra 50bp to borrow money, so be it - they'll live.

Sovereigns, however, are another story - they need to borrow in size, and they have historically relied on liquidity issues to ensure that they get the cheapest possible rate. (That's the main reason why US Treasury bonds have the lowest yields in the world, on a swapped-into-dollars basis: it's all about the liquidity, not the credit risk.) The great bond liquidity drought is arriving at the worst possible moment for G20 sovereigns which are already struggling with unprecedented levels of bonded debt. It's always liquidity that kills you, not insolvency: it's the inability to roll over your debts as they come due. Which means that the next wave of sovereign debt defaults might come even sooner than many analysts currently fear.