Of the multitude of opportunities in the mining space cluttering my desk in preparation of the upcoming investor rotation into mining-from coal to black gold to gold-rare earths intrigue me right now, in that, the space really has a single 'big boy', Molycorp (MCP), whose stock has been knocked hard, down 94 percent from its high of $79.16 in May 2011.

With the exception of, maybe, 2011, lousy earnings commensurate with lousy operating costs atop lousy spot REE prices have conspired to seriously whack this stock into the ground since the second half of 2011.

Fears of inadequate supplies of REE in 2010 and 2011 soared demand and created a stockpiling effect among large buyers. But, as buyers reached their limit, demand collapsed in the second half of 2011, causing a plummet in prices. Delays and cost overruns at the company's Mountain Pass facility merely added to its woes.

However, it appears the reverse is happening. Supplies have been worked off and sales are expected to rise, again, as evidenced from Moly's Zibo processing plant in China. Signs of a downstream inventory build up has begun, according to Moly management.

So, if, indeed, the turnaround is imminent, and Moly's numbers begin to demonstrate the comeback anticipated in the company's conference call of Nov. 7, that rush to the everyone-back-into-the-pool moment that's characterized Wall Street lately could set off a nasty short squeeze in the stock. With nearly 39 percent of the float sold short, the stock is hated, which also could mean that the rise back up for Moly could be rather fast and long.

In a Forbes Magazine article of Nov. 12, titled, Molycorp Stock Getting Very Oversold, Moly's share price looks cheap at the sub-$5 level, according to the author. With the daily RSI under 30, and a monthly RSI below 20 for the past two years, presently 6.76, the stock has entered my sights, as well, especially after carefully reading Moly's Q3 conference call minutes of Nov. 7. Management appears confident of the company's turnaround prospects-which are highlighted, below. 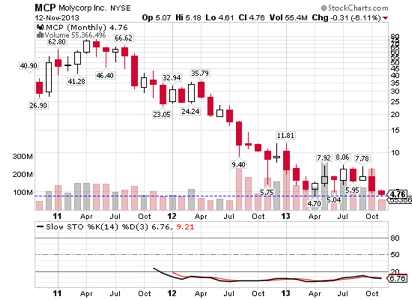 And there's nothing like a set-up for a 'dead' stock-heavily shorted, with realistic growth expectations, and better-than-expected top and bottom lines from today's gloomy sentiment-for superior short-term gains. Because of the heavy short position in the stock, Moly could be as explosive as other stocks which have had similar setups.

Mined primarily in China, rare earth elements are critical materials for the manufacturing of mobile devices and electric vehicles. Soaring prices and fears of shortages of REE followed an announcement by Beijing in 2010 of strict export quotas placed on Chinese sellers.

However, prices of REE, then, dropped precipitously in the second half of 2011 as a combination of a slowing of stockpiling activity and a loosening of export restrictions from China cut demand and loosened supply simultaneously.

But, in Sept., Bloomberg reported the announcement of Beijing's move to inspect 1,594 rare earth producers for violations of the country's REE export quota. Following complaints to the WTO lodged in Mar. 2012 by the US, EU and Japan, the POC's Ministry of Industry and Information Technologies stated it will seek to put a stop to and "blacklist" those producers operating in the southern provinces contributing to the breaching of China's 13,400 ton output quota of REE.

In the past, announcements from Beijing were taken somewhat lightly, but in the case of REE, Beijing is serious about the smuggling problem in the south, according to the Journal of Strategic Security (2012) (page 8).

"[O]ne need not doubt China's public justifications for REE export cuts," according to the report, citing Keith Delaney, executive director of Rare Earth Industry and Technology Assoc., who told JSS that he believes "all the steps they've [China] taken make sense to manage their resource better."

Delaney goes on to state that worsening smuggling, pollution from mining operations and "sloppy processing techniques" have resulted in "tremendous waste of valuable mineral resources" in the POC.

And Dr. Stanley Trout, Moly's Director of Magnets, agreed, and stated to JSS that China's decision to enforce its export quota is in the best interest of China, and not necessarily to appease complainants to the WTO.

"[T]hey've [China] always been looking for value added products," said Dr. Trout. "[T]heir export quotas have been on the raw materials but not on the downstream products," he added, which suggests that China's export quota will help supply Beijing's goal of increasing domestic consumption of more value-added goods, another goal of Beijing's.

Moly's Fundamentals for the Patient Investor

According to Moly's Nov. 7 conference call, stable to higher REE prices, lower operating costs, and higher volumes from Moly's Mountain Pass facility are projected by management for 2014 and 2015.

During the call, Moly's new President and CEO (as of Dec. 2) Geoffrey Bedford and CFO Michael Doolan provided the clearest insight to the company's excellent prospects for a profitable 2014 and 2015.

Using Moly's just-released Q3 results as a baseline, the company's potential for profitability appears likely in 2014, with 2015 as the year of complete righting of this ship, and then some.

However, Bedford expects the cost per ton at Mountain Pass to reach as low as "$6 to $7" in 2014, with costs declining further to $5 to $6 as soon as its chloralkali process is up and running. According to Bedford, Mountain Pass will reach the company's capacity goal of 19 to 20 thousand tons per year (up from 15 to 16 tons) sometime in 2014, with the potential of 40,000 tons of production during phase II in 2015.

Running the projected volume increase, cost declines and $105 million of capex spending slated for Mountain Pass into a back-of-a napkin function, Moly achieves approximately $250 to $300 million of earnings for 2015. And with 188 million Moly shares outstanding, that calculates to approximately $1.33 to $1.59 of annual earnings per share. Capitalize that level of earnings by today's NYSE P/E of 22 times, and Moly is a $29 to $35 stock.

The risk-to-reward play in appears grossly asymmetrical and should be considered by investors seeking a good mining play for the upcoming favorable seasonality of the mining shares.

Disclosure: I have no positions in any stocks mentioned, but may initiate a long position in MCP over the next 72 hours. I wrote this article myself, and it expresses my own opinions. I am not receiving compensation for it (other than from Seeking Alpha). I have no business relationship with any company whose stock is mentioned in this article.

Jason Bond
1.26K Followers
Jason Bond is an American stock trader, entrepreneur, and small cap expert. Jason teaches small cap swing trading at Jason Bond Picks. He is best known for his 2013 swing trading performance tripling the S&P 500 in the portfolio he manages. Jason’s small cap swing trading ideas are widely published on numerous financial sites and blogs. Prior to teaching small cap swing trading in 2011, Jason taught for the Webster Central School District in NYS from 2001 - 2011. Jason’s trading strategy attempts to capture gains in a stock within one to four days. He uses technical analysis to look for stocks with short-term price momentum. Jason is interested in the fundamental value of stocks but puts emphasis on price trends and patterns.
Follow
39 Comments