Questions regarding the motives of the FAB Universal (NYSEMKT:FU) management team and the transparency of its Chinese operations first surfaced in back to back Seeking Alpha articles published on September 26 and October 1 discussing massive dilution headwinds on the horizon. The dilutive events that could ultimately result in 37.9 million shares hitting the market arose from the back door RTO transaction that FAB's Chinese subsidiary used to go public in April 2012.

Next, after an over two-year hiatus since Alfred Little (A*L) published his last report leading to the delisting of a ChinaHybrid, SinoTech Energy, A*L broke his silence. On Thursday November 14, 2013, A*L put out a scathing report concluding that FAB Universal is a fraud. A*L's report went beyond capital structure issues and addressed FU's operations through intensive on-the-ground research. He found FAB guilty of rampant piracy, back-end deals with franchisees that guarantee returns, and of inflating its kiosk count by as much as 10 times. A*L's findings put into question 90% of FAB's kiosk revenues of $26 million reported for the first nine months of 2013 (see page 28 of the Q3 10-Q). We had opened up an investigation into FU's operations several months ago and our initial attempt (or should we say inability) to locate FAB kiosks in Beijing leads us to believe A*L's claim that FAB has grossly exaggerated its kiosk count.

On Friday, November 15, 2013, a Seeking Alpha contributor, "Unemon1" alerted GeoInvesting to an undisclosed RMB 100 million ($16.4 million) Chinese bond issuance by FAB. The implications of this development are significant, especially when one considers that FAB operates through Variable Interest Entities (VIEs) wherein U.S. investors have been found historically to have questionable legal claims to assets and cash flows.

In April 2013, FAB issued RMB 100 million ($16.4 million) of bonds to Chinese investors through one of its VIE subsidiaries, Beijing Fab Digital Entertainment Products Co., Ltd. ("FAB Digital"), and failed to disclose this debt in its U.S. filings. Page 37 of FAB's 2012 10-K clearly shows that FAB Digital is a subsidiary of FAB. (FAB's corporate structure diagram is presented later in this report). This bond issuance should have been reflected in both FAB's second and third quarter 2013 10Q filings, but it was not.

For now, let's take a look at how easy it is to prove FAB's bond offering.

A public announcement posted on August 2, 2013 on the official website of the Shenzhen Stock Exchange clearly stated that 100 million RMB in bonds (collectively, the "12 FAB Bond") had already been issued by FAB Digital

As shown in the screenshot below, the Shenzhen Stock Exchange announced under item 3 that: 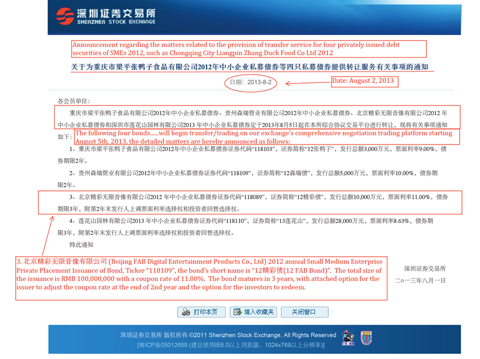 FAB completely failed to disclose this debt in its financials filed with the SEC.

Below is a screenshot of FAB's consolidated balance sheet taken directly from FAB's Q3 10-Q filed on November 14, 2013: 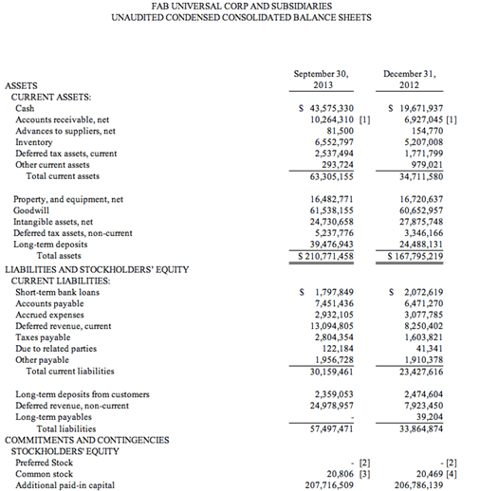 A simple review of each of FAB's liabilities shows no sign of the $16.4 million FAB Digital debt.

By failing to disclose this debt, FAB violated many SEC rules including: 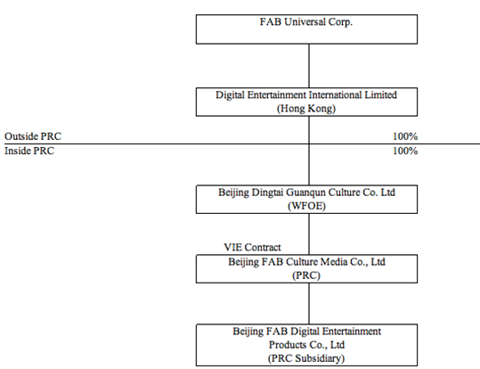 According to page 49 of the 2012 10-K shown below, FAB Digital was incorporated in September 2003 with registered capital of 1 million RMB.

The Chinese name of FAB Digital is

, which we confirmed using the Beijing Enterprise Credit Website operated by Beijing Government's State Administration of Industry and Commerce ("SAIC") (link here and here). As shown in the screenshots below, FAB Digital

was founded on September 3, 2003 with 1 million RMB registered capital and with Jiliang Ma serving as its legal representative. FAB Digital's business scope of "distribution and rental of audio, visual and other media products" described in SAIC records matches FAB Digital's business description in FAB's 10-K. 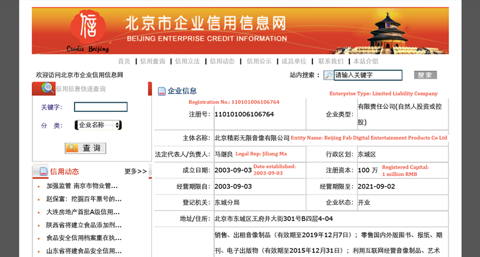 In contrast to A*L's allegations, FAB's very obvious failure to disclose $16.4 million in debt should take very little time for securities regulators and FAB's auditor (Friedman LLP) to confirm. In fact, this should take Friedman, CEO Chris Spencer, CFO John Busshaus, the NYSE, SEC, or even Jim Rodgers all of 20 minutes or at most one day, being generous, to confirm this.

FAB indicated on Friday November 15, 2013 that they would respond to the A*L report in short order. At this point, FAB's U.S. management should proactively halt their own stock to protect investors and commence an independent investigation to carefully check these very serious allegations.

The GeoTeam
27.79K Followers
Author of Geo Microcap Insights
Ground-breaking analysis of alpha-rich, untapped opportunities in microcaps
GeoInvesting has worked diligently over the last decade to understand and benefit from working in areas that the Wall Street “crowd” has avoided – namely, microcap stocks. This niche of the market, while mostly ignored by analysts and financial media, is still often quietly invested in by many well-known billionaires. We apply our own deep-dive analysis in the space to find pockets of information arbitrage and unnoticed opportunities that have acted as the backbone for our investing success for over a decade. Unlike some investment banks and sell-side analysts, we don’t get paid by companies to write about them.

Armed with over a dozen analysts and a team of on the ground due diligence experts led by Maj Soueidan’s three decades of full-time investing experience, we look for high-impact idea generation. If you are looking to broaden your knowledge of investing, GeoInvesting can help with actionable insights on a wide array of stocks.


Since GeoInvesting’s inception in 2007, we’ve been helping investors understand companies better by interviewing management teams, dissecting conference calls, interacting with our wide network of investors and scouring financial documents for hidden clues. GeoInvesting provides quick, concise and efficient research instead hundreds of pages of meaningless boilerplate jargon to pour through. You will no longer have to sift through these documents to find the most relevant aspects of a company’s operations, results and guidance – that’s our promise.

>Education on investing, both financial and psychological

Maj Soueidan is a full-time investor of 30 years. He co-founded GeoInvesting to bring institutional quality investment research to the individual investor and help broaden the awareness of the opportunities that exist in the inefficient micro-cap universe. In addition to educating investors on winning equity strategies, Mr. Soueidan has been on a mission to protect investors from fraud and pump and dump schemes. He introduced the “China fraud” to Geoinvesting and through his research process, identified dozens of U.S. listed China stocks he concluded were frauds, so that the Geoinvesting team could perform exhaustive on-the-ground due diligence research on them, including Puda Coal and Yuhe Intl.

Maj works with and manages the GeoInvesting Team on a daily basis to increase its investment opportunity pipeline and heighten GeoInvesting’s awareness in the financial markets to intensify its market influence. He stresses the concept of “information arbitrage” in an era where information overload has actually made it more difficult for investors to locate profitable information. An information arbitrage exists when a disconnect between stock prices and available public information on a company is noticeable, and monetarily worth pursuing.

GeoInvesting has partnered with Bill Langbein of Sanacurrents to explore biotech opportunities through the publication of sentiment reports.

Before founding SanaCurrents, William (Bill) Langbein spent more than 20 years as a life science business journalist, with stops at California Medicine, In Vivo and Reuters Health. During that time, he wrote on genomic discoveries, the transition of the pharmaceutical companies to rely more on biologics, and the dawn of precision medicine, through which most drug developers came to recognize a one-drug-for-all approach would no longer work.

Because of the inherent volatility of biopharma and medical devices, small companies typically fly under the radar of investors. The emergence of precision medicine, however, reduces the volatility of small companies and increases the potential for strong returns. SanaCurrents was founded to identify the undervalued therapies that would benefit patients and investors the most.