FAB Universal (NYSEMKT:FU) has completely failed to address in any substantive way a growing series of reports that challenge the core of FAB's business and expose an almost complete lack of fiduciary responsibility and corporate governance by FAB's U.S. management:

The information in the prospectus reveals:

Further confirmation that this bond offering occurred is through a recorded conversation we had with Daton Securities, one of the buyers of 12 FAB Bond, that confirmed Daton Securities knew nothing about FAB Digital being controlled by a US listed company.

The following are the detailed findings in the prospectus:

1. FAB's Chinese VIE "FAB Digital" was the issuer of the bonds.

Page 64 of the prospectus shows that the bond issuer, Beijing FAB Digital Entertainment Products Co., Ltd ("FAB Digital"), was 100% owned by Beijing FAB Culture Media Co., Ltd ("FAB Media"). This is identical to the organizational structure FAB presents in its 2012 10-K filed on 3/18/13. The prospectus confirms that the legal representative of FAB Digital is Jiliang Ma, consistent with FAB's June 1, 2012 proxy. The descriptions of FAB's business, including wholesale, retail, and network of approximately 15,000 5C kiosks are nearly identical to those described in FAB's SEC filings. Most importantly, on page 80 of the prospectus, FAB Chairman Hongcheng Zhang is listed as a director of the issuer (FAB Digital) and a registered 60% shareholder of the issuer's parent company, FAB Media, matching FAB's disclosure in the VIE contracts annexed to the proxy.

FAB Digital's prior ownership structure was disclosed in the March 15, 2012 VIE agreements annexed to the proxy as follows:

The 12 FAB Bond prospectus outlines the series of changes to the ownership structure of FAB Digital that precisely match up with the ownership disclosures in FAB's proxy filing:

March 3, 2012, based upon issuer's Shareholders' Meeting decision, the legal representative is changed from Gang Wang to Jiliang Ma.

All of the above unquestionably confirms that FAB's consolidated VIE, FAB Digital, was indeed the issuer of the 12 FAB Bond. FAB's Chinese Chairman, U.S. CEO, and CFO concealed and then vehemently denied the existence of this bond offering in violation of multiple securities laws:

Missing from the diagram is Beijing Dingtai Guanqun Culture Co., Ltd. (the "WFOE"), that through VIE agreements should have complete control of FAB Media and FAB Digital. The US investors' interests (contractually exerted by the WFOE) are totally ignored in the 12 FAB Bond prospectus.

As a result of the lack of disclosure, Chinese purchasers of the 12 FAB Bond are unaware that FU investors, through the WFOE, control and are entitled to 100% of profits of FAB Media and FAB Digital through the VIE agreements. Our recorded conversation with Daton Securities, one of the buyers of 12 FAB Bond, confirmed that Daton Securities knew nothing about FAB Digital being controlled by a US listed company.

Most importantly, the issuance of the 12 FAB Bond without the approval of the WFOE is a violation of the VIE agreements. According to Article 2.4 of "The Exclusive Service Agreement" annexed to the proxy, the WFOE shall be in charge of FAB Digital's and FAB Media's funds and contract execution, including approval of the issuance of corporate bonds (among numerous other rights set forth in the agreement to protect investors).

To summarize in plain English: FAB Digital needed to get the WFOE's approval to issue the bonds, but the prospectus hid this requirement from the Chinese bond buyers.

On page 35 of FAB's June 1, 2012 proxy, FAB disclosed the operational management and revenue sharing arrangement of its 5C kiosks business as follows, 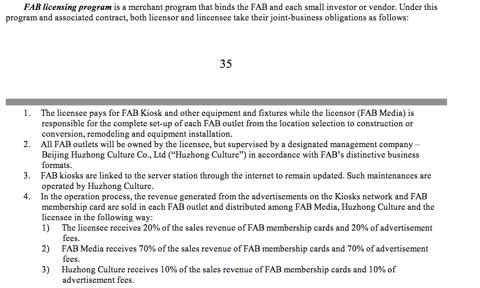 According to page 32 (shown below) of the 12 FAB Bond prospectus, Huzhong (Beijing) Culture Development Co. Ltd (互众(北京)文化发展有限公司) pledged its owner's equity as collateral for the 12 FAB Bond. According to the prospectus, the owners of Huzhong Culture are Jiang Zhou (80%) and Jianming Cui (20%). Huzhong Culture's business is described as "focusing on the business operation of 5C entertainment kiosks." 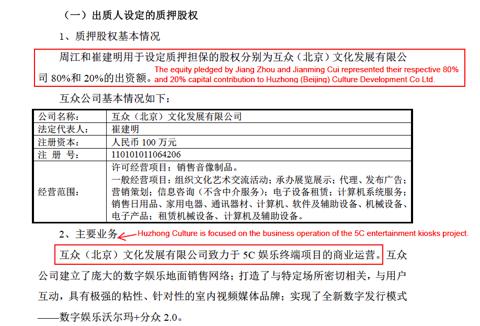 Why would Huzhong Culture, a supposedly unrelated company to FAB, pledge its assets to secure the 12 FAB Bond?

The answer is revealed on page 39 (shown below) of the prospectus: 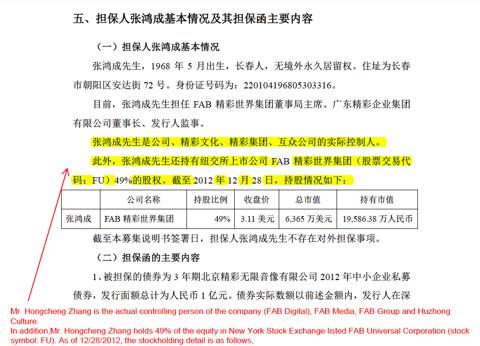 Based on this statement in the prospectus, FAB failed to disclose in its SEC filings countless related party transactions between its subsidiaries, franchisees, and Huzhong Culture (the operator of the kiosks). Such widespread hidden related party transactions call into question the true role of Huzhong Culture, which may be simply to help FAB cook its books, further calling into question the revenues and profitability of FAB's entire kiosk operation.

4. FAB Chairman Hongcheng Zhang may have pledged his FU shares to secure the bonds.

According page 39 (shown above) of the prospectus, Zhang personally guarantees the 12 FAB Bond. The prospectus specifically cites Zhang's 49% ownership in the NYSE listed FAB Universal as proof of Zhang's ability to pay. We can't tell from the prospectus, but Zhang may have pledged his FU shares to secure the bonds.

Zhonglei CPA Co., Ltd. (中磊会计师事务所) was the Chinese auditor of FAB Digital's financials, according to page 15 of the prospectus. After Zhonglei's client, WanFuShengKe (SZ300268), was determined to be a fraud by the Chinese Securities Regulatory Commission ("CSRC"), Zhonglei's license to audit securities issuers was revoked after Zhonglei was found negligent by the CSRC for:

b). Engaging in improper behavior in terms of obtaining audit trails and forming audit opinions that resulted in the issuance of falsified statements in the auditor's report.

All of Zhonglei's ongoing securities-related audit projects were suspended. Zhonglei clients were forced to switch to other firms. Kaisong Huang, the CPA who audited the FAB financials presented in the bond prospectus, moved to DaXin CPA LLP.

"In order to expand our business of media entertainment and copyright transaction, in June 2013 we made approximately a $13 million dollar refundable deposit to purchase the Longyuan Building in Miyun, Beijing… The building is 95,000 square feet…

As shown in the following screenshot of page 28 of the prospectus, "the entire 3rd to 9th floor, 2nd floor of the building's west side, underground parking space and storage" of the Longyuan Building (隆源大厦) totaling 9,499.95 square meters will be formally pledged as the first collateral for the 12 FAB Bond. (1 square meter = 10.8 square feet.) 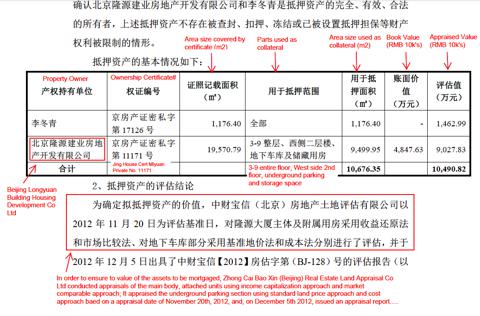 What was FAB really doing by depositing $13 million in June 2013 to acquire the Longyuan Building that was pledged in April 2013 by its current owner to secure FAB Digital's $16.4 million 12 FAB Bond offering?

In response to our report revealing FAB's undisclosed debt, on November 20th, 2013, FAB issued a press release repeating its vehement denial of the recent allegations. FAB therefore certainly appears to be denying that FAB Digital ever issued the 12 FAB Bond.

In addition to the numerous Chinese websites that confirm this bond issuance, on 10/25/13 the Daton Tri-Stone #2 asset management fund published its Q3 2013 fund management report that disclosed that the fund continued to hold 20 million RMB of 12 FAB Bonds.

Furthermore, GeoInvesting recorded a call to the Daton fund manager who acknowledged the fund's holdings of the 12 FAB Bond as of 9/30/2013.

How can FAB possibly continue to deny the existence of these bonds secretly issued by FAB Digital?

It's been one week since the allegations of fraud and misrepresentation have first been reported. FAB management has made breezy blanket statements defending their innocence rather than even attempting to refute a single allegation with any detail. FAB has yet to appoint an independent committee to examine our findings. Our question today is simple and applies to both the US management of FAB as well as the auditor, Friedman LLP. Do you deny that the 12 FAB Bond is in fact a bond issued by your VIE subsidiary to investors in China? Answer this simple question. If you deny it then please explain how all this evidence could possibly be wrong! The most important question to be answered: Is anyone on FAB's US management team willing to step up to protect US investors?

The GeoTeam
27.78K Followers
Author of Geo Microcap Insights
Ground-breaking analysis of alpha-rich, untapped opportunities in microcaps
GeoInvesting has worked diligently over the last decade to understand and benefit from working in areas that the Wall Street “crowd” has avoided – namely, microcap stocks. This niche of the market, while mostly ignored by analysts and financial media, is still often quietly invested in by many well-known billionaires. We apply our own deep-dive analysis in the space to find pockets of information arbitrage and unnoticed opportunities that have acted as the backbone for our investing success for over a decade. Unlike some investment banks and sell-side analysts, we don’t get paid by companies to write about them.

Armed with over a dozen analysts and a team of on the ground due diligence experts led by Maj Soueidan’s three decades of full-time investing experience, we look for high-impact idea generation. If you are looking to broaden your knowledge of investing, GeoInvesting can help with actionable insights on a wide array of stocks.


Since GeoInvesting’s inception in 2007, we’ve been helping investors understand companies better by interviewing management teams, dissecting conference calls, interacting with our wide network of investors and scouring financial documents for hidden clues. GeoInvesting provides quick, concise and efficient research instead hundreds of pages of meaningless boilerplate jargon to pour through. You will no longer have to sift through these documents to find the most relevant aspects of a company’s operations, results and guidance – that’s our promise.

>Education on investing, both financial and psychological

Maj Soueidan is a full-time investor of 30 years. He co-founded GeoInvesting to bring institutional quality investment research to the individual investor and help broaden the awareness of the opportunities that exist in the inefficient micro-cap universe. In addition to educating investors on winning equity strategies, Mr. Soueidan has been on a mission to protect investors from fraud and pump and dump schemes. He introduced the “China fraud” to Geoinvesting and through his research process, identified dozens of U.S. listed China stocks he concluded were frauds, so that the Geoinvesting team could perform exhaustive on-the-ground due diligence research on them, including Puda Coal and Yuhe Intl.

Maj works with and manages the GeoInvesting Team on a daily basis to increase its investment opportunity pipeline and heighten GeoInvesting’s awareness in the financial markets to intensify its market influence. He stresses the concept of “information arbitrage” in an era where information overload has actually made it more difficult for investors to locate profitable information. An information arbitrage exists when a disconnect between stock prices and available public information on a company is noticeable, and monetarily worth pursuing.

GeoInvesting has partnered with Bill Langbein of Sanacurrents to explore biotech opportunities through the publication of sentiment reports.

Before founding SanaCurrents, William (Bill) Langbein spent more than 20 years as a life science business journalist, with stops at California Medicine, In Vivo and Reuters Health. During that time, he wrote on genomic discoveries, the transition of the pharmaceutical companies to rely more on biologics, and the dawn of precision medicine, through which most drug developers came to recognize a one-drug-for-all approach would no longer work.

Because of the inherent volatility of biopharma and medical devices, small companies typically fly under the radar of investors. The emergence of precision medicine, however, reduces the volatility of small companies and increases the potential for strong returns. SanaCurrents was founded to identify the undervalued therapies that would benefit patients and investors the most.