Modern lifestyles are closely linked to rising obesity. As emerging markets follow the lead of the US, expanding waistlines could provide a guide to consumption-related investment trends in emerging markets.

People are gaining weight in most regions across the globe. Body mass index, a measure of weight in relation to height, has been rising in both developed and developing nations (Display 1). 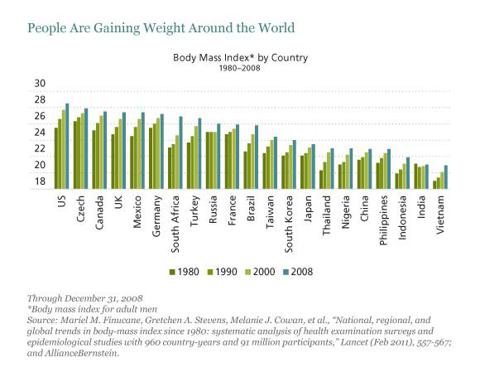 It is unfortunate that emerging markets seem poised to inherit the unwanted side effects of economic progress. Yet if they follow the trends we’ve seen in the developed world, there will be far-reaching implications for economies and markets. As a result, we think investors should pay close attention to obesity as an important indicator of consumer and health-related trends in emerging-market countries.

To understand why, look at the US. Average calorie consumption in the US rose steadily from approximately 3,000 calories a day in the early 1970s to 3,800 in 2006, according to UN statistics. About two-thirds of Americans are overweight today, based on the World Health Organization’s definition.

It’s clear that a modern lifestyle has led to greater consumption of high-calorie foods and less physical activity. Fewer Americans are engaged in physical work, and sedentary desk jobs are the norm.

China: From Famine to Feast

Today, China seems to be following American patterns. Rapid urbanization and modernization have prompted a sharp decline in physical activity—especially in the workplace. People are consuming more processed and packaged foods—and more calories.

So, it’s no surprise that obesity is on the rise. A study published in Obesity Reviews reported that 11.4% of Chinese men were obese in 2009, compared with 2.9% in 1993, and obesity is rising among women and children, too. It’s hard to imagine that only a generation ago, between 1958 and 1961, millions of Chinese died of famine.

Meanwhile, venues for physical exercise are limited in cities, and online entertainment is booming. The average Chinese user now spends about 20 hours a week online—more than double a decade earlier. And China is already the world’s largest market for online gaming.

Obesity is no longer just a developed-market malaise. Simply put, when countries get richer, people consume more calories (Display 2) and burn less energy. In developed countries, this trend has typically continued for several decades before pressure has built up within society to pursue a healthier lifestyle. 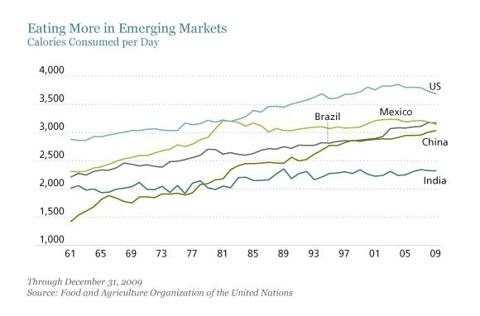 Investors should take note. If the pattern follows that of developed countries, we would expect to see increasing demand for snacks, sodas, fast food and prepared meals in emerging markets from Johannesburg to Jakarta. Identifying and investing in emerging-market food manufacturers and fast-food franchises that should do well in the future could be akin to investing in McDonald’s (MCD) or Coca-Cola (KO) 30 or 40 years ago. Today, the per-capita concentration of fast-food chains in emerging markets is still less than one-tenth of US levels.

Smartphones and gaming are also worth watching. As an increasingly overweight adolescent generation starts to earn money, we would expect spending on smartphone games to increase, and would look for investment opportunities in companies poised to benefit from this trend.

Meanwhile, medical companies and drugmakers that offer solutions and treatments for obesity should also grow rapidly, in our view. These could include companies that sell diet products or diabetes treatments. China is already home to the largest number of diabetics in the world—11.6% of the population today versus 1% in 1980, according to the Journal of the American Medical Association. In the US, 10.9% of the population suffers from diabetes, reports the International Diabetes Federation (IDF).

Diabetes-related expenditure per person in China was $333 in 2013 compared to $1,436 worldwide and $9,800 in the US, IDF data show. And the organization estimates that 54% of those living with diabetes are undiagnosed.

Of course, it will be great news if developing countries don’t follow the US example and choose healthier lifestyles. But for now, the evidence from China and elsewhere suggests that an obesity epidemic is in the making, and that it has the potential to influence key sectors across emerging markets.

Disclaimer: The views expressed herein do not constitute research, investment advice or trade recommendations and do not necessarily represent the views of all AllianceBernstein portfolio-management teams. AllianceBernstein Limited is authorized and regulated by the Financial Conduct Authority in the United Kingdom.

AllianceBernstein (AB)
3.64K Followers
AB is a research-driven investment firm that combines investment insight and innovative thinking to deliver results for our clients. At AB we believe that research excellence is the key to better outcomes and as a result we have built a global firm with exceptional research capabilities. We offer a broad array of investment services that span geographies and asset classes to meet the needs of private clients, mutual fund investors and institutional clients around the world.
Follow
To ensure this doesn’t happen in the future, please enable Javascript and cookies in your browser.
Is this happening to you frequently? Please report it on our feedback forum.
If you have an ad-blocker enabled you may be blocked from proceeding. Please disable your ad-blocker and refresh.