There is a fascinating new paper out describing how rapid oil and resource extraction may be changing how the earth spins. That, in turn, could influence weather.

Read on for the paper’s summary. The paper itself is being presented this week at the AGU Chapman Conference on Complexity and Extreme Events in Geosciences in India: 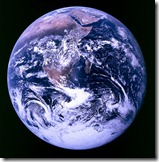 We shall give an account of the change in the physical properties of the earth rotation such as moment inertia and angular velocity resulting from the extraction of fossil fuel and predict its impact on climate change of the earth.

I haven’t read the whole paper, so I have no idea how credible the maths are, but I do dig the heroic banging together of oil, complexity and the earth’s angular momentum in a single paper.

Paul Kedrosky
26.31K Followers
Dr. Paul Kedrosky maintains a widely-read blog on technology finance at Paul.Kedrosky.com (http://paul.kedrosky.com). Earlier in his career, Dr. Kedrosky founded the technology equity research practice at HSBC James Capel. Dr. Kedrosky was one of the first analysts to cover Internet companies, as well as making early and timely calls in networking and communications. He currently sits on various boards, is a strategist for Ten Asset Management in Encinitas, California, and a Senior Fellow with the Kauffman Foundation. He appears regularly on CNBC, and has also appeared on CNN, PBS Newshour, ABC Nightline, and elsewhere, as well as being quoted in the New York Times, Wall Street Journal, etc.
Follow
70 Comments