It was announced Wednesday morning that Alibaba is seeking to extend the draw-down period of an $8B loan from January of 2014, next month, to December of 2014. Their reasoning behind this was to "maintain flexibility" as they have plenty of cash on hand right now.

So what does this mean for Yahoo (YHOO)? Well Yahoo owns a 24% stake in Alibaba, which has certainly been a major catalyst to the 100% increase in share price seen over the last year. As Alibaba's valuation grows, so too does that 24% stake.

Now before I proceed to estimate the delay's effect on Alibaba's and, in turn, Yahoo's valuation, let's look at the agreement the two parties have for the coming IPO:

The more shares in Alibaba that Yahoo gets to keep, the better; so this was great news, and investors realize that, as evidenced by the new highs that Yahoo is currently reaching. The reason why this is so great, in case you missed it, is because the Alibaba valuation keeps growing.

In late September it was announced that bankers thought Alibaba was deserving of a $100B valuation. This would make Yahoo's 14.4% stake that it is keeping, worth $14.4 Billion; and the sale of the other 8.6% would generate roughly $5.1 Billion in cash after tax. This would give Yahoo's stake in Alibaba a value of $20.5 Billion, or 61% of Yahoo's $33.6 Market Cap the day of the announcement.

Only a month later, Bernstein came out with a $190 Billion valuation for Alibaba. This came in response to Alibaba's phenomenal Q2 in which revenue increased 61% to $1.74B and net income increased 145% to $717M. Now I am not saying this $190 Billion valuation is correct, I am only using it to show the potential of Yahoo's Alibaba stake. If Alibaba is worth that much, Yahoo's 14.4% that it is keeping, is now worth $27.4 Billion, while the other 8.6% it is required to sell would generate approximately $10 Billion in cash after tax. This would give Yahoo's stake a whopping $37.4 Billion. If you compare that to the $33.6 Billion Market Cap of Yahoo the day that estimate came out, you begin to realize just how big this could be.

It has been another month since then, so is it reasonable to believe that Alibaba should now be worth $300 Billion? Maybe, but that is not the point I am trying to make. What I am trying to show here is that Alibaba is a company growing at an unheard of pace, and this growth is continuing.

On November 11th, China's biggest shopping day of the year, Alibaba's handled $5.7 Billion in transactions; this was up from the $3.1 Billion in transactions it handled in 2012. Now let me put this in perspective for you. In 2012, U.S. Black Friday online sales totaled $1.04 Billion. U.S. Cyber Monday sales totaled $1.46 Billion. Add these two totals together and it is still $600 Million short of the online transactions handled by just Alibaba last year, not to mention that Alibaba's sales grew 84% to its 2013 total of $5.7 Billion, while U.S. holiday sales struggled to reach last year's marks. 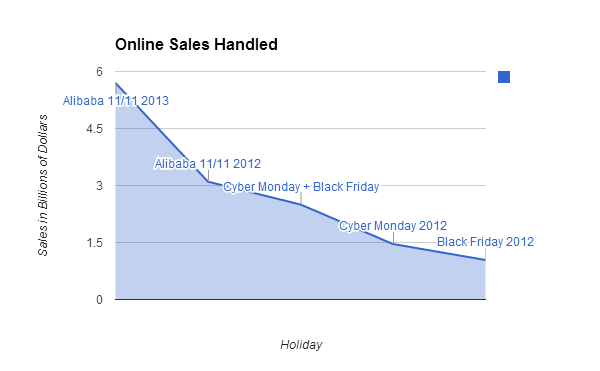 Alibaba is an amazing company, a once in a life time opportunity, and investors have noticed as they are pushing Yahoo shares past their 2006 highs. But as shares of Yahoo slumped today on news of the delay in the Alibaba IPO, I think investors are missing the fact that this is good news. Alibaba is growing, and it is growing fast. Sales grew at 61% year over year and valuations of the company are growing every day, and Yahoo has to sell a big part of this company when the offering does occur. So why is it bad news that shareholders get to hold on to the full stake of Alibaba for a longer time? This will give time for Alibaba's valuation to grow even more.

So let's do some hypothetical approximations. Alibaba wants to extend the draw-down period to December of 2014, so let's assume an IPO date of January 2015 for arguments sake. This gives Alibaba another full year to grow its valuation. I think it is reasonable to believe that Alibaba could be worth up to $250 Billion by that IPO date. If this valuation were to be achieved, Yahoo's 14.4% stake that it would keep in Alibaba would be worth $36 Billion. The other 8.6% that it is required to sell would generate approximately $13 Billion in cash after tax. This would give Yahoo's total Alibaba stake a valuation of approximately $50 Billion. Yahoo's Market Cap as of 12/11/13 is $40.11 Billion…

Giving Alibaba another year to grow could unlock stake worth more than Yahoo itself. Add this to Yahoo's stake in Yahoo! Japan, and its core assets including Yahoo! Search, Yahoo! Mail, Fantasy Sports, Tumblr, etc. and its roughly $3 Billion in cash on its balance sheet, and Yahoo begins to look like a bargain. Compound this with the $5 Billion share buyback that Yahoo recently announced and it would seem as if Yahoo has quite a bit more room to run in 2014. I think any weakness on the delayed IPO news should be seen as a buying opportunity.

Disclosure: I am long YHOO. I wrote this article myself, and it expresses my own opinions. I am not receiving compensation for it (other than from Seeking Alpha). I have no business relationship with any company whose stock is mentioned in this article.