Given all the attention on whether (or when) the Fed will taper, we found two notes that should generate positive returns if (when) tapering begins.

The "conventional wisdom" is that rates will move up, it's only a question of when. The structured notes we are looking at today provide equally interesting but very different ways to make a bet on a rate increase, while providing a level of protection to the investor if rates decline.

Note #2 is on the Barclays 10Y Treasury Futures Index ("Index #2"). iPath US Treasury 10 Yr Bull ETN (DTYL) is a Barclays ETN which is based on a similar index; in this analysis, we will use DTYL as a proxy for Index #2 because using a publicly traded security easily lends itself to historical comparisons and analyses. Terms

Both of these notes are a good illustration of the power and potential pitfalls of structured notes. Customization is great for meeting investor needs, but without understanding the underlying elements of a note, there is significant potential for investors to be negatively surprised by the outcome of their investment. Investors need to be diligent in understanding how these products will actually react (as opposed to understanding historical or conceptual performance) and, importantly, issuers and distributors must empower the investor through transparency and education.

So with that said, lets quickly review the terms of these two trades so we can compare how they will perform in different yield environments. To understand this discussion, it is important to remember that when Treasury yields increase, Treasury bond prices decrease. Therefore, when Treasury yields increase, the indexes used here (TLT, DTYL) would be expected to decline. Both notes provide an inverse return, meaning that when the index declines the investor gains.

Note #1 is a three year product that offers the following outcome at maturity:

The chart below shows the performance of a short position in TLT vs. Note 1: 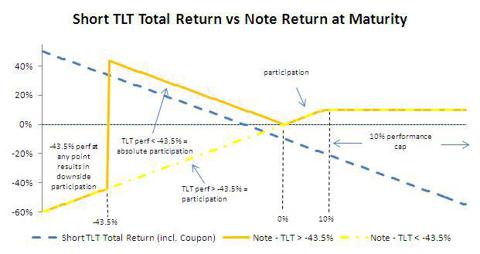 Note #2 is a five year product that offers the following outcome at maturity:

The chart below shows the performance of a short position in DTYL vs. Note 2: 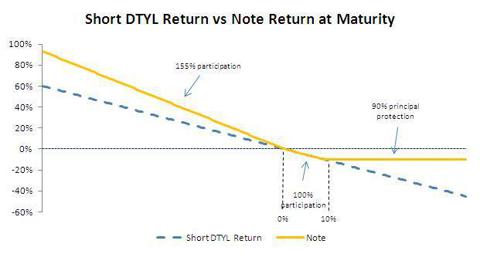 Lets analyze how these notes would react in different yield environments.

(1) Yields decline: If the economy takes a downturn (i.e., a "double dip") the Fed will most likely not taper. Yields would probably decline, resulting in a gain for both indexes. For Note #1, investors earn the increase in TLT, up to a 3% annualized return (given the 10% cap after three years), While the note would underperform a long position in TLT (a long position in TLT would also receive a 3% annual interest coupon which the note holder will not receive), investors might be comfortable given that the real play in this note is for yields to increase and in an event of declining yields the investor still comes out relatively O.K. (as compared to shorting TLT and taking a much larger loss should TLT increase). In contrast, Note #2 would lose up to a maximum of 10% for investors - investors would lose 1% of their investment for each 1% increase in DTYL. Note #1 seems a bit better in this scenario as it is a shorter duration with less downside.

(2) Yields increase moderately: The economy continues to recover, the Fed begins tapering and yields slowly begin to increase. In this scenario, Note #1 will appreciate from TLT slowly declining in value, resulting in a gain for investors. Note #2 investors will also benefit from a bump in yields. While on the surface it looks like this scenario benefits Note #2 due to the participation rate (1.55x), the performances are actually similar. I will discuss this further below.

(3) Yields increase dramatically: Lower demand for Treasury bonds (e.g., a downgrade due a government shutdown) or rapid inflation (e.g., due to rapid economic growth) might result in actual yields increasing dramatically. This would be the most volatile outcome as yields can swing dramatically resulting in a potential knock-out of the absolute return for Note #1, should TLT decline more than 43.5%. This would result in the most risk of an outsized loss to investors in Note #1. In contrast, Note #2 investors will benefit from large swings as they have no knockout provision. This outcome is much more favorable to Note #2.

A nice feature of both notes is that the notes generally outperform the underlying indices if the investor is directionally wrong (i.e., investors purchasing these notes are obviously making a play that yields increase; if an investor is wrong and in fact yields decrease, these investments should generally outperform the underlying indices). This is a major advantage of these structures vs. a straight, non-structured short investment (e.g., a short position on DTYL).

We have raised two questions for further analysis:

To answer these questions, let's do some technical analyses:

Which note will outperform in the moderate yield increase scenario?

To recap, Note #1 uses the TLT index, a portfolio of Treasury bonds with maturities of at least 20 years. Note #2 uses the Barclays 10Y Treasury Futures Index ("Index 2"), which is comprised of a rolling front month (or second month) 10Y futures contract.

It is worthwhile noting that Note #1 is more sensitive to interest rate moves due to a longer duration (20 years vs 10 years).

(Separately, another distinction worth noting is that the construction of the indexes are also quite different: TLT is constructed on a portfolio of bonds with low turnover while Index #2 is actually a single short term futures contract and therefore has a higher level of turnover. Futures tend to be viewed as more complex and high turnover may result in lower efficiencies.)

Although Note #1 is more sensitive, Note #2 has a levered component of 1:1.55 should rates increase and bond prices decrease. From an investment perspective, which is more powerful- the increased sensitivity or the leverage?

Let's look at historical performance for the answer:

During the same aforementioned time period between July 2012 and August 2013, a 10.5% decline occurred in DTYL (vs. a 20% decline in TLT). The corresponding actual 10 year yield increased from 1.43% to 2.75%, a 92% increase. Note that DTYL moved less dramatically than TLT over this time period, even though the 10Y yield increased in absolute terms the same amount as the 20Y (approximately 1.3% in absolute percentage points), and in relative terms increased much more (92% vs. 63.5%). The dampened movement in DTYL is due to the fact that 10 year notes are less sensitive to interest rate moves as compared to 20 year notes. Based on this analysis, Note #1 will outperform in a moderate yield increase scenario despite the 1.55x participation of Note #2. For an easy analysis, you can play around with the PRICE function in excel. 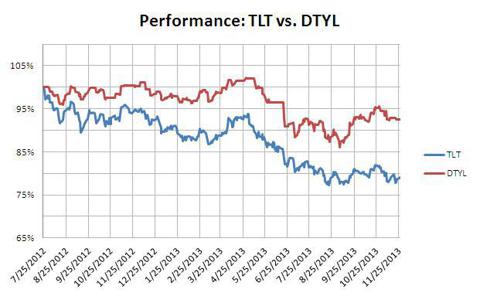 Under what yield increase scenario will Note #1 be "knocked out" resulting in a loss to the investor?

Note these strategies would be hard, if not impossible, to duplicate for a traditional investor in any other form, and certainly not within a single structure - hence the power of structured notes!

In an upcoming post I will further break down the notes to better understand how the components are priced. TLT provides some interesting mechanisms that are worth exploring.