Atlanta, Georgia based Aaron's (NYSE:AAN) is in the business of selling and leasing furniture, electronics and appliances. With more than 2,000 Company-operated and franchised stores in 48 states and Canada, Aaron's has been a strong growth story since being founded as a single operation in 1955. The company operates a little over 60% of the stores, while franchisees are responsible for the remaining 700 or so under the Aaron's, HomeSmart and RIMCO names. Over 1.5 million people shopped at Aaron's last year and new CEO Ronald Allen expects this number to climb in the upcoming year.

While everyone might not be drawn to the rent-to-own business - obviously it's certainly cheaper to outright buy an item - Aaron's does provide an intermediate service for the cash-strapped consumer. Aaron's claims to be "better than lay-away" and "easier and more flexible than a credit card." Whether or not these things are true is up to the consumer, but it is apparent that the business model is capable of generating solid returns. In an informal survey, we found that an average shopper might pay about one and a half times the listed price of an item over a 24-month period.

Interestingly, about 46% of the company's agreements go to ownership - indicating that roughly half of Aaron's customers utilize the higher aggregate payments to eventually own the goods they take home. Aaron's largest competitor - Rent-A-Center (RCII) - has more store locations, but the stock generally commands a lower valuation multiple and thus trails in market capitalization. Together, the two operators control roughly 63% of the rent-to-own market's approximately 8,600 locations. This effectively makes them a duopoly-like pair of this market, much like Coca-Cola (KO) and PepsiCo (PEP) in the beverage world.

Due to this clout, Aaron's has been able to consistently reward shareholders via share repurchases and dividends. At first blush, the dividend record appears especially compelling. The company has paid a dividend for the last 25 years and increased this payout by 23% just last month. However, Aaron's still only pays has a payout ratio of approximately 4% and a dividend yield of just 0.3%.

However, the share repurchase side has been much more robust. Common shares outstanding stood at about 81 million at the end of 2008, as compared to roughly 76 million outstanding today. More than that, Aaron's recently announced an accelerated repurchase program that would retire about 3.5 million shares and use up 80% of the current program. It's easy to see that the company has focused on this aspect much more than dividends. CFO Gilbert Danielson had this to say on the subject during the most recent earnings call:

"Certainly, just having cash on hand earning very little is not a good long-term strategy. So that's why [we like] the share repurchases. We're also looking to dividend a little bit - and we can increase dividends - but our dividend has been pretty low through the years… that's just the historical situation of the company because we've been a growth company for so many years… anything could happen, but I think doing the share repurchases will be the best alternative for us."

Given that the company is still in a growth stage, it makes sense that Aaron's wants to keep its flexibility while simultaneously rewarding shareholders. With that, let's move to the past operating history of the company.

Aaron's Inc has grown earnings (orange line) at a compound rate of 13.2% since 1999, resulting in a $2.2+ billion dollar market cap. In addition, Aaron's earnings have risen from $0.38 per share in 1999, to today's forecasted earnings per share of approximately $2.02 for 2013. Further, as described, Aaron's has paid a very low dividend (pink line) over this time period.

For a look at how the market has historically valued Aaron's Inc, see the relationship between the price (black line) and earnings of the company as seen on the Earnings and Price Correlated F.A.S.T. Graph below. 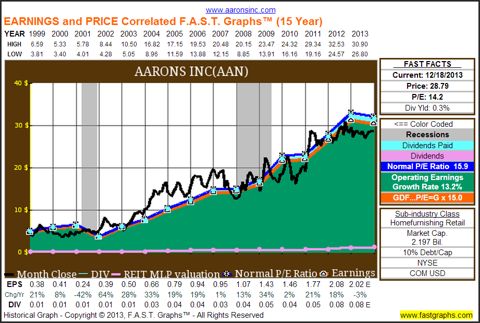 Here we see that Aaron's market price previously began to deviate from its justified earnings growth; starting to become slightly overvalued in 2004 and coming back to fair value during the most recent recession. Today, Aaron's appears in-value in relation to both its historical earnings and relative valuation.

In tandem with the strong earnings growth, Aaron's shareholders have enjoyed a compound annual return of 14% which correlates closely with the 13.2% growth rate in earnings per share. A hypothetical $10,000 investment in Aaron's on 12/31/1998 would have grown to a total value of $71,242.81, without reinvesting dividends. Said differently, Aaron's shareholders have enjoyed total returns that were roughly 4.1 times the value that would have been achieved by investing in the S&P 500 over the same time period. 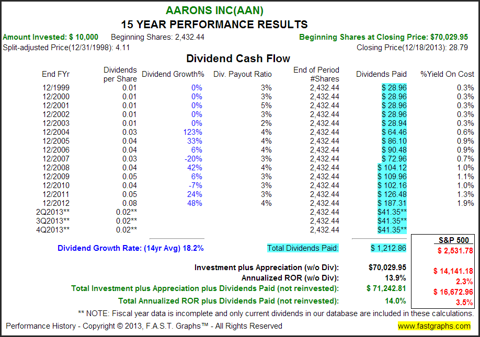 But of course - as the saying goes - past performance does not guarantee future results. Thus, while a strong operating history provides a fundamental platform for evaluating a company, it does not by itself indicate a buy or sell decision. Instead an investor must have an understanding of the past while simultaneously thinking the investment through to its logical, if not understated, conclusion.

In the opening paragraphs a variety of opportunities were described. It follows that the probabilities of these outcomes should be the guide for one's investment focus. Yet it is still useful to determine whether or not your predictions seem reasonable.

Nine leading analysts reporting to Standard & Poor's Capital IQ come to a consensus 5-year annual estimated return growth rate for Aaron's of 12%. In addition, Aaron's is currently trading at a P/E of 14.2, which is inside the "value corridor" (defined by the orange lines) of a maximum P/E of 18. If the earnings materialize as forecast, Aaron's valuation would be $53.11 at the end of 2018, which would be a 13.2% annualized rate of return including dividends. A graphical representation of this calculation can be seen in the Estimated Earnings and Return Calculator below. 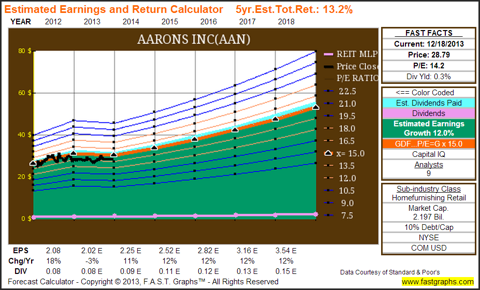 Now, it's paramount to remember that this is simply a calculator. Specifically, the estimated total return is a default based on the consensus of the analysts following the stock. The consensus includes the long-term growth rate along with specific earnings estimates for the next two upcoming years. Further, the dividend payout ratio is presumed to stay the same and grow with earnings. Taken collectively, this graph provides a very strong baseline for how analysts are presently viewing this company. However, a F.A.S.T. Graphs' subscriber is also able to change these estimates to fit their own thesis or scenario analysis.

Since all investments potentially compete with all other investments, it is useful to compare investing in any prospective company to that of a comparable investment in low risk treasury bonds. Comparing an investment in Aaron's to an equal investment in a 10-year treasury bond, illustrates that Aaron's expected earnings would be 4.5 times that of the 10-year T-Bond Interest. This comparison can be seen in the 10-year Earnings Yield Estimate table below. 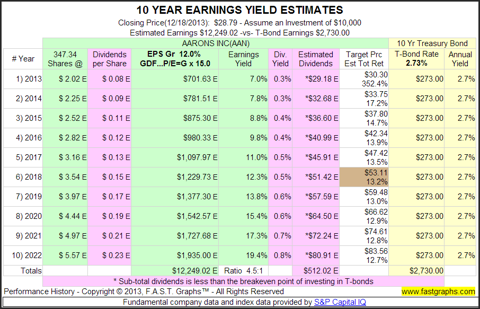 Finally, it's important to underscore the idea that all companies derive their underlying value from the cash flows (earnings) that they are capable of generating for their owners. Therefore, it should be the expectation of a prudent investor that - in the long-run - the likely future earnings of a company justify the price you pay. Fundamentally, this means appropriately addressing these two questions: "in what should I invest?" and "at what time?" In viewing the past history and future prospects of Aaron's we have learned that it appears to be a strong company with reasonable upcoming opportunities. However, as always, we recommend that the reader conduct his or her own thorough due diligence.

Disclaimer: The opinions in this document are for informational and educational purposes only and should not be construed as a recommendation to buy or sell the stocks mentioned or to solicit transactions or clients. Past performance of the companies discussed may not continue and the companies may not achieve the earnings growth as predicted. The information in this document is believed to be accurate, but under no circumstances should a person act upon the information contained within. We do not recommend that anyone act upon any investment information without first consulting an investment advisor as to the suitability of such investments for his specific situation.

Disclosure: Long AAN, KO, PEP at the time of writing. I am long AAN, KO, PEP. I wrote this article myself, and it expresses my own opinions. I am not receiving compensation for it. I have no business relationship with any company whose stock is mentioned in this article.

FAST Graphs Growth by Colton Carnevale
3.23K Followers
F.A.S.T. Graphs Growth is focused on finding undervalued stocks with high potential P/E expansion to help grow your portfolio. Our articles are written based on our philosophy “How can we help people the most?” We answer this by finding the most relevant and accurate information there is, to offer an opportunistic conclusion on under-followed stocks. With the help of the FAST Graphs tool, we find, we research, and we analyze under-covered stocks that have high potential for reward, giving you the opportunity to get ahead of the market to buy low and sell high. Our overreaching goal is to help investors make their best investment decisions. FAST Graphs™ is a powerful research tool providing “essential fundamentals at a glance” on over 17,000 symbols. FAST Graphs™ empowers the user to research stocks deeper and faster by allowing them to exploit the undeniable relationship and functional correlation between long-term earnings growth and market price. Warren Buffett, the greatest capital allocator of all time, said; “there are only two things that investors need to know; how to value a company and how to think about stock prices.” With FAST Graphs™ at their disposal, users are able to perform both of these critical tasks… FAST. F.A.S.T. is an acronym for Fundamentals Analyzer Software Tool that takes all the hours of manual graphing of business fundamentals and reduces it to seconds, giving you critical information in an instant. With one glance you know a lot about the business you are graphing and its past, present and future value. FAST Graphs™ should be the first step in every research project. Each graph is worth 1,000 words in describing a company’s growth, consistency and valuation.Colton Carnevale, Analyst