One of the ways I plan on investing in 2014 is through the many facets of the housing market.

As we start to head towards the end of 2013, a year that produced an amazing bull run across the board, we start to look at what sectors are going to provide substantial returns in the year to come. While this year, the banking recovery and auto recovery were two enormous headlines, 2014 is likely to be a significant year for the housing market.

All over the U.S. it's being reported that homes owned by banks are starting to sell with greater momentum than in past months. Headlines about the housing markets continued recovery from 2012 through 2013 have been of prominence.

The steps to housing recovery continue to take place. Namely, home prices and the banking system are now starting to once again create a foundation that can build jobs and contribute to the economy.

Buy REITs as the Housing Market Continues to Recover

One of the investments I'm likely to take advantage of heading into 2014 is through REITs. Admittedly, REITs were never a vehicle that I had invested in, but as I'm confident the housing market recovery will be in full swing in the coming year, making up a small part of my portfolio with REITs seems like a safe way to put myself in a position for some respectable returns. 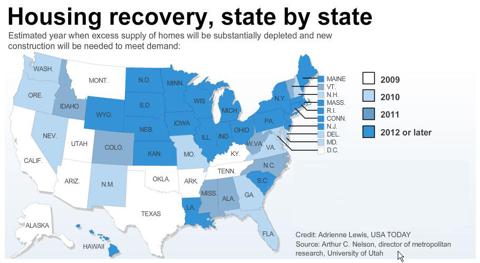 REITs have the appeal of generally paying very attractive dividends - usually upwards of 3% annually. As asset back trusts, this makes them much more appealing than other "conservative" dividend paying routes like bonds. Additionally, REITs have lagged throughout 2013.

The first half of the year, REITs were yielding nice returns. When the Fed came out in May and announced potential plans for an early taper, REITs got clipped to the tune of almost 14% in the next five weeks.

I'm brushing off concerns about possible interest rate hikes in 2014 being an adverse factor to REIT performance and arguing that the housing recovery can provide lucrative yields through these channels.

One of the first items that caught my eye towards the end of this year was the continued reporting that banks were benefiting from housing prices rising.

Sales of bank-owned (REO) homes accounted for 10 percent of all residential property sales in November, according to RealtyTrac. That is up from 9.1 percent in October and accounted for the third consecutive month of increases in REO sales.

"Lenders are taking advantage of this environment to unload more of their bank-owned inventory and in-foreclosure inventory at the foreclosure auction," said RealtyTrac's Daren Blomquist in a release.

With regards to interest rates - one of the most oft touted potential bears to the real estate market, we don't really have an idea what is coming in 2014. The pragmatic guess would be that rates will remain very low in the grand scheme of things, but will likely inch upward.

Regardless, I wouldn't let the fear of interest rates preclude you from making a potential investment in the sector.

Best of luck to those who decide to invest in this sector in the coming year.

How You Can Invest in the Recovery

Quoth the Raven
8.12K Followers
This page and all of its contributor content is operated by Quoth the Raven Research, LLC. Please read this disclaimer first and foremost: https://quoththeravenresearch.com/disclaimerterms-of-service/ Quoth the Raven is Christopher Irons from Philadelphia, PA. Commentary by QTR has been featured in Barron's, the Wall Street Journal, Financial Times, Yahoo Finance, Reuters, Bloomberg and many other financial outlets. QTR is a speaker at numerous financial conferences annually. QTR was named to Benzinga's "10 Financial Twitter Names to Follow in 2018" and in late 2017 was named to Forbes' "Top 100 Twitter Accounts for Finance". In 2016, QTR's work was selected as a finalist for the Sohn Investment Conference Idea Contest. In 2014, he was named to Seeking Alpha's Top List of Best Performing Financial Bloggers and was TipRanks' #6 Performing Financial Blogger (Out of 4,000+). View QTR's track record on TipRanks: https://www.tipranks.com/bloggers/quoth-the-raven View QTR's website: http://www.quoththeravenresearch.com View QTR's Twitter: https://twitter.com/QTRResearch Listen to the QTR podcast: http://quoththeraven.podbean.com All content contained herein is bound to both Seeking Alpha's terms of service, as well as the terms of service found here: https://quoththeravenresearch.com/disclaimerterms-of-service/
Follow
20 Comments