Zynga (ZNGA) operates in an industry where the competition is quite intense and its users have a short interest period. Any new or interesting game would easily divert the attention of a player from an existing game either from competitors or the company. So the company needs to continuously come up with original and innovative games. Currently, the company is mostly dependent on its top three games that include Farmville 1, Farmville 2 and Zynga Poker that collectively generate more than 50% of the company's revenues. These games are around two to three years old and can easily be replaced with any new or original game from its competitors or by the company. Being dependent on a few games is quite a risky strategy. 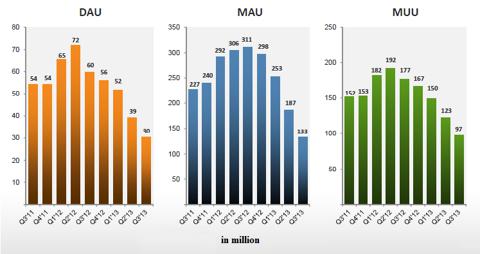 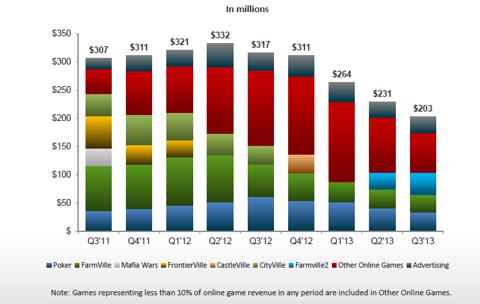 Another alarming sign for the company is that the users are also losing interest in its top revenue generating games. During the first nine months of 2013 the company's online game revenue decreased $262.7 million compared to the same period of the previous year. This decrease is primarily attributed to decreases in revenue from FarmVille, CityVille, FrontierVille, Zynga Poker and CastleVille in the amounts of $126.4 million, $92.1 million, $50.9 million, $32.2 million and $29.4 million, respectively. The decreases in online game revenue from these five games were the result of the overall decay rate in bookings and audience metrics in these games. These decreases were partially offset by higher revenues in FarmVille 2 and ChefVille, in the amounts of $89.6 million and $34.9 million respectively, which were the result of the launch of these games in September 2012 and August 2012, respectively. The other games accounted for the remaining net increase of $56.2 million.

So far it seems that there will not be a come back for the company any time soon, in terms of positive earnings. In order to analyze how many daily active users or average revenue per DAUs the company would require to breakeven its business I developed two scenarios with some assumptions. First, based on company's fourth quarter expectations, I managed to project the company's fiscal year 2013 income statement. On the basis of that I calculated average DAUs and average revenue per DAUs of the company for the year 2013. Then for 2014 I kept the costs of the company constant.

The costs in the years 2013 and 2014 are constant for both scenarios. I also used the average DAUs and revenue per DAUs of 2013 to calculate the revenues that achieve breakeven for 2014. In the first scenario, I kept the revenue per DAUs constant. Based on the first scenario, the company would require 0.85 million more daily active users to achieve the breakeven that would generate an average revenue of $24.05 per user for the company. Similarly, in the second scenario, by fixing average DAUs, the company would require $1.31 per DAUs with an average DAUs of 36.5 million to breakeven.

I believe that this scenario might be achieved, but based on the company's current performance it seems that its revenue per DAU is increasing due to decreasing DAUs during the last few quarters. Another big concern, as mentioned earlier, is declining revenues from its top revenue generating games which would be the biggest hurdle for the company to improve its revenues and reduce its costs. The company's success is only dependent on the success of its recently launched games. If the company is able to attract enough DAUs or revenues per DAUs as mentioned above, the company's growth prospects appear positive over the next few quarters. Otherwise the company will follow the decreasing trend that it has been experiencing over the last few quarters. Currently, I would recommend a bullish stance on this stock for the short term.

Gemstone Equity Research
731 Followers
Gemstone Equity Research provides in-depth and research driven trading insight to individuals and institutional investors. Our team constantly looks for companies to cover in technology and services sector, which enables us to provide timely and actionable investment ideas to our clients. We achieve our goals through intense focus and discipline. We hope to share our knowledge through this platform.
Follow
22 Comments