It was not a pretty day on Friday for shares of social media darling Twitter (TWTR). Twitter shares fell nearly $10, more than 13%, the largest one-day fall since the company went public in early November. Shares are down almost 15% since their most recent high this past week. The culprit on Friday was an analyst downgrade, something not uncommon to this name lately. So why did Twitter fall this much on just one downgrade? Today, I'll analyze the social media giant.

Macquarie analyst Ben Schachter downgraded Twitter from Neutral to Underperform on Friday, but maintained his $46 price target. While the analyst sees a bright future for the company, he noted that fundamentals have not changed recently for Twitter. It was just two weeks earlier that Macquarie started Twitter at Neutral, and yet Twitter shares had rallied 40% since. This was a pure valuation call, as the analyst believed the stock's run up was unjustified. Remember, this is a name that had an IPO at $26, so the stock had rallied tremendously when it first started trading. The run from $40 to $75, as seen in the chart below, was surprising to many. 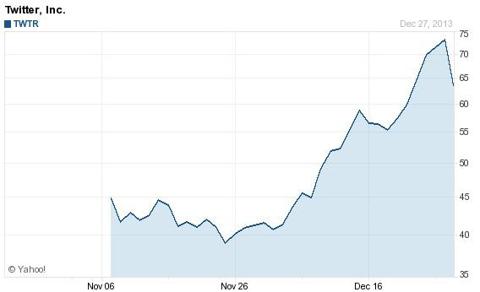 Twitter was probably due for some profit taking after the huge run up. However, this is a name that's shaken off many downgrades recently, so some people don't see how this one was different. Perhaps enough was enough with the rally. To see all of Twitter's analyst ratings information, click here. I'll discuss some of the recent comments in this section.

On December 16th, Twitter received two downgrades. SunTrust downgraded Twitter from Buy to Neutral, citing valuation. The firm noted that Twitter had rocketed 20% past the firm's $50 price target. Like Macquarie, SunTrust said that Twitter's future was bright, but that investors were paying way too much. On the same day, Wells Fargo cut Twitter from Market Perform to Underperform, with a price target of $36 to $39. Wells Fargo stated that investors were underestimating some challenges Twitter faces, noting that the valuation was high and Twitter would have a hard time meeting investor (not analyst) expectations.

Why did I highlight that one day? Well, those two analyst downgrades sent Twitter shares down from $59.00 to $56.61. There was another downgrade the following day, but a few days later, Twitter shares started to rally again, despite a few more negative analyst notes. Up until the end of last week, negative analyst notes were mostly brushed off. Don't forget, many analysts came out with Neutral ratings on this stock when it traded in the $40s. I guess a rally to nearly $75 was just too much. Friday's downgrade of Twitter wasn't a surprise, and it wasn't one analyst who saw something that everyone else didn't. However, with the rally getting pushed just way to far, Friday's downgrade had a huge impact on the stock. I'll dive into Twitter's valuation in the next section.

An out of control valuation:

One of the reasons why this downgrade hurt so much is that Twitter's valuation seems extremely out of control. I said this the last time I discussed Twitter, and that was when shares were in the low $40s. In that article, I compared Twitter against three social media or new internet names: Facebook (FB), LinkedIn (LNKD), and Zillow (Z). I also threw in Google (GOOG) and Apple (AAPL) to show what an established name in the space looks like. This time, I'm also throwing in Tesla Motors (TSLA), another name that rocketed higher to bubble-like valuations and has a cult following behind it. The table below shows the expected growth figures for each name's fiscal 2014, since 2013 is basically over with. The valuation figures are based on Friday's closing prices plus the expected values for revenues and earnings in the fiscal year.

**Apple numbers are based on fiscal year ending in September 2014. All others use a calendar year.

Twitter doesn't have a real P/E yet because it is losing money, but if the company had a profit of just a few pennies, you'd be looking at a P/E in the hundreds or thousands. Even looking at the P/S numbers paints a really stark picture. Twitter currently is trading for more than 30 times expected 2014 revenues, and that includes the fact that shares dropped by more than 13% on Friday (Facebook also down 4% on Friday). For Twitter just to get to the P/S of Facebook, using current prices, Twitter would need yearly revenues of $2.65 billion. That's more than double the $1.13 billion expected for 2014. Twitter probably won't reach that $2.6 billion plus kind of yearly run rate until early 2016 at the earliest. For Twitter to get to the valuation of LinkedIn or Zillow, Twitter will need revenues of around $3 billion.

For Twitter to get down to the lofty P/S values of Tesla or Google, Twitter would need yearly revenues in the $6 billion range. Remember, Twitter does not even have $1 billion in yearly revenues yet! For Twitter to get to the P/S value of the giant Apple, Twitter would need revenues of almost $13 billion, more than 10 times what's expected in 2014. The key takeaway here is that Twitter will trade at an ultra-premium valuation for quite some time. Even if shares were to drop back to $50 a share, the valuations would still be high. As a point of reference, the mean and median price targets among wall street analysts are $43.83 and $46.00, respectively. Most analysts think Twitter shares are extremely overvalued, which is why lately you've seen a lot of downgrades on valuation concerns.

Short interest on the rise:

With almost two full months of trading in Twitter now complete, we've gotten a couple of updates on short interest. NASDAQ provides two updates a month, and you can see the brief history of Twitter short interest in the table below.

Twitter doesn't seem like a heavily shorted stock when you look at the days to cover ratio. This is especially true when you consider how Twitter's volume has soared recently. The last five trading days have seen volume of more than 20 million shares each, with two of those days over 60 million. Twitter's days to cover ratio will probably remain low at the next update, since the average volume number is likely going up.

But a glance at Twitter's key statistics page tells a slightly different story. According to Yahoo!, Twitter has 544.7 million shares outstanding, meaning about 4.35% of Twitter's outstanding share count is short. But Twitter's float is much less, at just 284.36 million shares, meaning more than 8.32% of the float is short. That's not a terribly large number just yet, but as you saw in the table above, short interest has shot higher at the 2nd and 3rd updates. Should Twitter get to 30 million or 50 million shares short, or maybe even more, this will be something that will really need to be discussed. Short squeeze potential is always possible in a low float name. Perhaps that's fueled part of the latest rally.

Twitter shares fell on Friday due to an analyst downgrade. While that may seem logical, this time was different. Twitter shares had exploded higher in recent weeks, and finally, we met a point where an analyst downgrade meant something. $75 was just too much, and as the analyst said, "nothing has changed fundamentally since we initiated coverage last week, except for the 40% rally". Twitter had mostly shaken off negative analyst reports over the past month plus, but there was a point where it couldn't shake them all off. This was that point, but yet, the valuation is still completely ridiculous. Twitter is a definite short candidate on valuation, but like Tesla or Facebook earlier this year, it is a short position that would scare anyone. Investors might want to wait for the next pop to short, because the key takeaway here is that Twitter needs to put up spectacular results for years to come to justify today's prices.