Is There A Better Way?

As we prepare to close the books on 2013, investors are being hit with a variety of financial forecasts for 2014. Are we better off basing investment decisions on forecasts or a method based on observing, tracking and adjusting?

Stock market investors are obsessed with forecasts, but how helpful are they? The concepts of forecasting are basically the same for stocks, bonds and commodities. The forecaster takes known information from the present day and projects it into the future based on what they believe to be reasonable estimates. Since it can help us illustrate (A) the accuracy of forecasting, and (B) a better method to improve our odds of success, we will look at 2013 forecasts for gold and gold's subsequent performance. 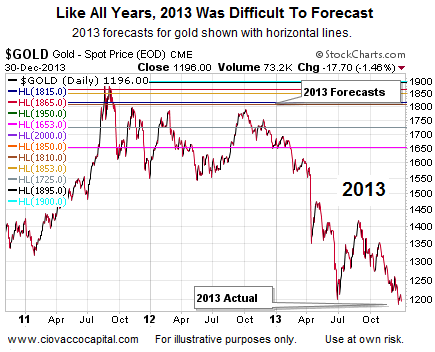 The forecasts above were published in a December 21, 2012, Kitco News article. An excerpt is below:

Gold could hit a record high in 2013 due to soft monetary policy, less tail risk related to a breakup of the eurozone and ongoing support from physical demand, said BNP Paribas. The bank forecast an average of $1,865 in 2013. BNP Paribas economists look for global economic growth to rebound to 3.4% year-on-year next year from 3.1% in 2012. Still, economies "are not yet out of the woods," meaning potential for more monetary accommodation, BNP said.

The table below shows each firm's forecast according to Kitco News. Forecasting is demanded by the public, which is why firms publish forecasts. Since we respect and understand the difficulty of forecasting, we refer to the firms in generic form in the table below. Our purpose is not to criticize, but rather to help investors understand the role forecasting should or should not play in their investment decision making process. Gold closed Monday at $1,196. 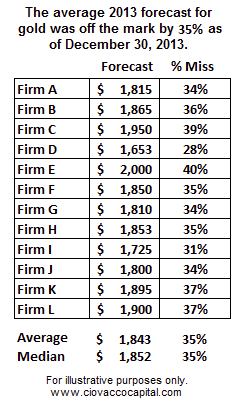 On October 25 we made the case for comparing all investment options to the general stock market in order to focus on the best risk-reward opportunities. The concept applies to gold. Our market model uses the chart below to compare the demand for gold relative to the demand for stocks. Since supply and demand, rather than opinions or forecasts, determines the value of our investments, the chart below said for 350 of the 365 calendar days in 2013, stocks were more attractive than gold. The simple rules based system allows us to consider gold only when the blue moving average is above the red moving average, which occurred between August 26 and September 9 (see green and red arrows below). When the ratio of gold to the S&P 500 drops, as it did for most of 2013, it is indicative of weak investor demand for gold relative to the demand for stocks. 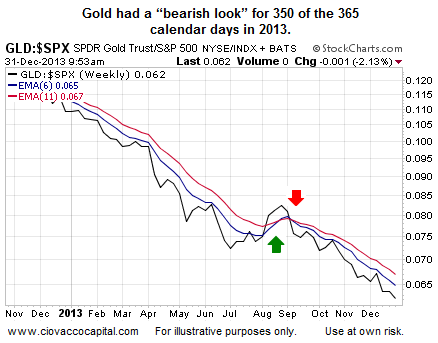 Assume we purchased gold (GLD) on December 31, 2012, based on the average 2013 forecast of $1,843. For comparison purposes, the moving average system would have allowed us to buy gold on August 26. If our criteria for selling gold was based on a bearish moving average crossover (blue below red), we would have sold gold on September 9. A buy and hold investor in GLD is down 28% YTD. An investor using a simple "pay attention" system would have lost just over 1% before being required to cut their loss. 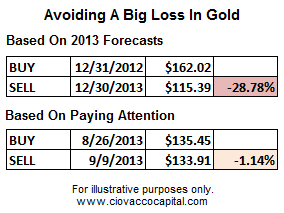 Do the inaccurate forecasts for gold in 2013 speak to the intelligence or competence of those making the forecasts? Absolutely not. Wall Street firms hire some of the brightest minds in America. The inaccurate forecasts speak to the difficultly of the task. This video clip compares the task and accuracy of handicapping a football game to the task of attempting to forecast the future actions of millions of investors. 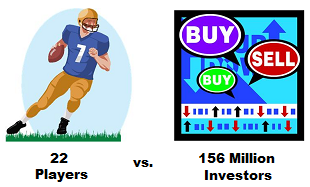 The moral of the story is handicapping the actions of 22 players on a football field is much less daunting than trying to predict the investment decisions of millions of people 12 months in advance. The best football handicappers have track records not much better than a coin flip.

Early in Tuesday's session, the strength of the S&P 500's (SPY) bullish trend remained in "not too concerning" territory. The odds of a pullback in stocks increase when the slopes of the moving averages roll over, which is not what we have currently. The S&P 500 is shown in black below. 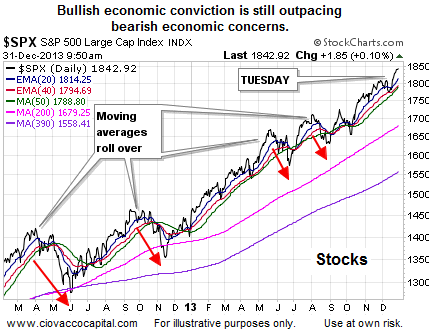 The chart above allows to monitor the aggregate opinion of all investors in relation to the economy, earnings, monetary policy and geopolitical developments. The bullish trend tells us the aggregate opinion remains favorable. Monday brought some additional data to support that favorable view. From Bloomberg:

Home prices in 20 U.S. cities rose in October from a year ago by the most in more than seven years, signaling the real-estate rebound will keep bolstering household wealth in 2014. The S&P/Case-Shiller index of property prices in 20 cities climbed 13.6 percent from October 2012, the biggest 12-month gain since February 2006.

The observable evidence, which is based on supply and demand, continues to call for an investment allocation with exposure to growth-oriented stocks. Therefore, until the evidence shifts meaningfully, we continue to hold our positions in U.S. equities (VTI), technology (QQQ), financials (XLF), energy (XLE), small caps (IWM), emerging markets (EEM), China (FXI) and global stocks (VT). If investors learned anything in 2013, it was that producing an accurate forecast is a difficult task at best. If we pay attention to the market's pricing mechanism, the market will tell us when changes are in order. If you are new to the concept of paying attention rather than forecasting, this week's video provides four specific examples.

Disclosure: I am long SPY, VTI, QQQ, XLE, XLF, EEM, FXI, VT. I wrote this article myself, and it expresses my own opinions. I am not receiving compensation for it. I have no business relationship with any company whose stock is mentioned in this article.