(Editors' Note: This article covers a stock trading at less than $1 per share and/or with less than a $100 million market cap. Please be aware of the risks associated with these stocks.)

After soaring 270% from its Nov. 20 close, Growlife Inc. (OTCQB:PHOT) trades near all-time highs. While the market cap of PHOT rips through $100 million, while sporting only $3.61 million in sales, in my mind PHOT looks and feels like an explosive cult stock-a stock which attracts investors with an underlying fire of emotion.

Stick with me on the PHOT brainstorm. Let me quickly explain the PHOT thesis before I give you the set-up.

What is a cult stock?

Sounds crazy? It's real, and PHOT is one of those stocks.

But, here's the deal with cult stocks:

Don't expect a buy-and-hold strategy to work for you very often. Instead, expect massive volatility, which, in the case of PHOT, can translate to a quick profit (held for minutes, hours, or a couple of days) during the run-up, fueled by crazy volume, "high" expectations, and a pent-up emotional-relief response to an industry once locked-up for decades in a modern-day Dark Age of sanctimonious oppression.

So, now, state legislators across the country are jumping on board to the populist movement, and we can profit from this one-off renaissance of freedom (some say, a new government tax revenue plan, like the lottery scheme).

Well, in any case, the madness of crowds is a compelling reason to hold the stock, or to get into PHOT for the first time - but... should be bought when the TIME IS RIGHT.

Timing and profiting from patterns and psychology is what day-trading is all about. And in the case of PHOT, fundamentals mean nothing in this business. It's a trade, and should not ever be misconstrued as a 401(k) retirement stock; it's a quick money-in-your-pocket stock, a Schedule D 1040 stock. 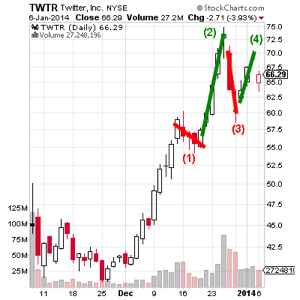 And I'll use Twitter, Inc. (TWTR)-another cult(ish) stock-as the example of the set-up for, what I see can happen to PHOT very easily-a potential TWTR move on steroids! 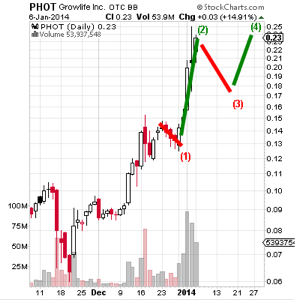 We see the big move, a pause (1), and a resumption of the bull move (2). Not knowing when traders will exhaust themselves on the upside (2), we'll wait for the break (3), at which time we enter for the move back up at (4).

It's at the leg higher, at the start of (4), where we want to take the ride for our killing in PHOT.

The Right Time to Take a Bite at PHOT

For those following PHOT with me, I entered when the stock popped up through its bullish downtrend on Dec. 30, for a quick 20% pop profit four days later on the 2nd of January.

But, as it turns out, PHOT may give us opportunity to take another bite of the apple in coming days.

I'll keep you posted on PHOT through my Twitter and Facebook accounts. Better yet, join us at the Jason Bond chat room each day for the up-to-the-moment execution of the PHOT trade and other exciting and potentially big-moving trades I have on the Watch List.

Disclosure: I have no positions in any stocks mentioned, but may initiate a long position in PHOT over the next 72 hours. I wrote this article myself, and it expresses my own opinions. I am not receiving compensation for it. I have no business relationship with any company whose stock is mentioned in this article.

Jason Bond
1.26K Followers
Jason Bond is an American stock trader, entrepreneur, and small cap expert. Jason teaches small cap swing trading at Jason Bond Picks. He is best known for his 2013 swing trading performance tripling the S&P 500 in the portfolio he manages. Jason’s small cap swing trading ideas are widely published on numerous financial sites and blogs. Prior to teaching small cap swing trading in 2011, Jason taught for the Webster Central School District in NYS from 2001 - 2011. Jason’s trading strategy attempts to capture gains in a stock within one to four days. He uses technical analysis to look for stocks with short-term price momentum. Jason is interested in the fundamental value of stocks but puts emphasis on price trends and patterns.