As regular readers will know, one reason I write this comment is so that I can ensure a steady flow of interesting and thought-provoking conversations my way, since conversations like that are what occasionally produce useful insights. When I first started working in inflation products, I would regularly go into meetings with thoughtful clients holding a handful of ideas, and emerge with two handfuls.

A friend and former colleague of mine sent the following thought:

…something I have in mind but haven’t read in your columns yet deals with the concept of entropy. For some reason, I keep remembering the second principle of thermodynamics which states that entropy can do nothing but increase. As entropy is a measure of disorder or volatility, aren’t we due to deal only with messier and messier situations, meaning that new bubble should be an accumulation of long volatility products? I can draw a lot of parallels with innovation, productivity, or simply family. As time goes, it has become more and more difficult to cross the channel using the Eurostar (probability that you get stuck in the tunnel during a few hours has shifted upward significantly, some say because of bad weather conditions), it has become more and more difficult to fix a broken device (you’d rather buy the new one and you are incentived to do so most of the time)…

As a financial markets analogy, the entropy thought is useful. Remember though that entropy only is guaranteed to increase in a completely closed system. Thus, the universe always increases its entropy, but the sand on a beach is continually sorted into different-sized grains through the action of the waves. The car will keep running rougher unless one takes time to replace the oil and tighten the belts. And the same is certainly true of financial markets.

However, the engineer/physicist will remind us that the apparent decrease in entropy of those systems comes because we aren’t considering the full system. We need to consider how the sorting of sand grains on the beach uses energy from the waves, so that the waves are becoming less-ordered. Daddy is helping organize the family but losing his own sanity. And financial markets are artificially stabilized from time to time, at the cost of the sovereign becoming less ordered.

And that is clearly what we are seeing in this case. The financial crisis was “averted,” but only because sovereign entities assumed serious fiscal liabilities and backed their monetary policies into a corner. Thus, the total system is no more “orderly” than it was originally. This observation has been made by many, but I am intrigued by the analogy to entropy. The question is, where do we “put” that further disorder? Where do sovereign entities go to increase their own order by putting their houses in order?

Taken to an extreme, the analogy probably breaks down. It certainly isn’t true that over epochal time frames, total financial disorder has increased. The capitalist financial system is self-organizing and self-correcting at some level. Or is it? Marx clearly felt otherwise; although he has been ridiculed for decades, wouldn’t it be a kick in the pants if he was right at some level, and the messiness of capitalism eventually broke it to pieces? (N.B.: Marx didn’t necessarily think capitalism was unsustainable because of messiness, but one way to think about the Marxian philosophy is that capitalists are achieving order by causing disorder among the proletariat’s financial condition).

The real question is, where is the ‘reset’ button? How can we slough off much of this disorderliness without a cataclysm, for example a slew of sovereign defaults or effective defaults through inflation? Or is that the only place that the disorder can go: do we essentially stick the problem back on the little guy, making him pay for the sovereign’s weakened condition through higher taxes, higher inflation, and default? If so, then we ought to be thoughtful about what Marx said was the next step.

And speaking of revolution, it does seem that the “pledge” of support from EU financial ministers for Greece was a mite premature. Greek Prime Minister Papandreou asked for folks to be a bit more explicit about how the mechanism would work, precisely; at the same time German Chancellor Merkel cautioned against a pledge of support that she characterized as “overly hasty.” Frankly, it sounds to me like Papandreou isn’t being entirely rational…he characterized yields of somewhat over 6% as “excessive.” Really? It wasn’t that long ago that all of the AAA countries were raising money at higher yields. If I were Papandreou, I would hit the bid at 8% – if there is such a bid – and be done with it.

Today, we start off with Initial Claims (optimistic Consensus: 455k from 462k) and CPI (Consensus: +0.1%/+0.1% ex-food-and-energy versus +0.2%/-0.1% last month) before the Philly Fed report (Consensus: 18.0 from 17.6) mid-morning concludes the economic data for the week. Of these, I am of course focused on CPI. Last month’s negative core CPI print was the first in many years, and many people are concerned that core inflation is about to take a further nosedive lower. The models I follow, though, anticipated that the decline in core was mostly a catch-up to the proper trend and I don’t anticipate a further deceleration. The consensus call for +0.1% appears approximately fair to me.

The dollar index has been close to unchanged over the last couple of years (lagged 6 months), suggesting that headline inflation (now at 2.6% year-on-year) and core inflation (now at 1.6% year-on-year but expected to fall to 1.4% as of tomorrow) should be converging. Obviously, this doesn’t tell us much about whether headline CPI will converge down to core or core will converge up to headline (usually both, although headline tends to do the bulk of the converging). And it isn’t terribly crucial unless you own TIPS and so care deeply about the headline index instead of the steadier core inflation. But I thought it was worth pointing out. 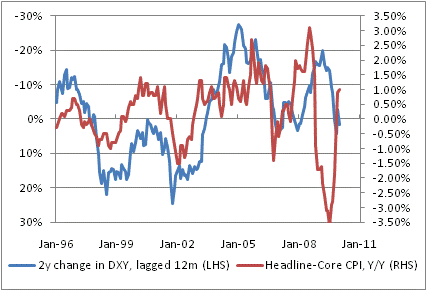 Recently volatile, but suggests headline-core spread is a little too wide

Today is also the first NCAA basketball game. You know what that means: quiet markets, probably. I expect the upward trend in stock prices to continue, although I think we’re getting to the end of that trend, and bond prices to remain range-bound and fairly boring.

Michael Ashton
3.36K Followers
Michael Ashton has been a recognized leader in developing the U.S. inflation derivatives market. He traded the first interbank U.S. CPI swaps in 2003 and, as a dealer, was a primary liquidity-provider in that market for two large banks. He represented about one-third of interbank swaps volume during his tenures at those firms. He invented and was the sole market-maker for the CME CPI Futures contract. He has written and spoken extensively about the use of inflation-indexed products for hedging real exposures, and has written more broadly in a commentary format about the rates markets and macroeconomy. Mr. Ashton is currently the managing principal at Enduring Investments LLC. His comments on this site and others are not posted in that role, and no opinions of his should be construed to be recommendations of or to reflect the views of his employer. He recently published "What's Wrong With Money? The Biggest Bubble of All."
Follow
4 Comments
To ensure this doesn’t happen in the future, please enable Javascript and cookies in your browser.
Is this happening to you frequently? Please report it on our feedback forum.
If you have an ad-blocker enabled you may be blocked from proceeding. Please disable your ad-blocker and refresh.