We conclude that a narrow majority of analysts would rate Ford Motor Company bonds as investment grade and that the reward to risk ratio on Ford bonds has narrowed to below average levels. We explain our conclusions in the remainder of this note.

Assuming the recovery rate in the event of default would be the same on all bond issues, a sophisticated investor who has moved beyond legacy ratings seeks to maximize revenue per basis point of default risk from each incremental investment, subject to risk limits on macro-factor exposure on a fully default-adjusted basis. In this note, we also analyze the maturities where the credit spread/default probability ratio is highest for Ford Motor Company. Lastly, we opine on the consensus judgment of whether or not Ford Motor Company bonds are investment grade in light of the revised definition of that term under the Dodd-Frank Act of 2010, which we summarize below. 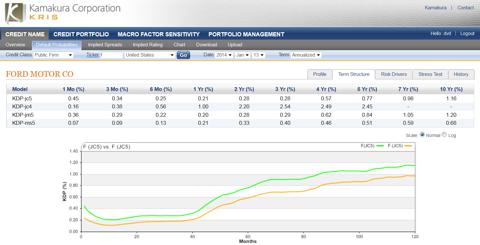 We explain the source and methodology for the default probabilities below.

The graph below shows 6 different yield curves that are relevant to a risk and return analysis of Ford Motor Company bonds. These curves reflect the noise in the TRACE data, as some of the trades are small odd-lot trades. The lowest curve, in dark blue, is the yield to maturity on U.S. Treasury bonds, interpolated from the Federal Reserve H15 statistical release for that day, which matches the maturity of the traded bonds of Ford Motor Company. The second lowest curve, in the lighter blue, shows the yields that would prevail if investors shared the default probability views outlined above, assumed that recovery in the event of default would be zero, and demanded no liquidity premium above and beyond the default-adjusted risk-free yield. The third line from the bottom (the orange dots) graphs the lowest yield reported by TRACE on that day on Ford Motor Company bonds. The fourth line from the bottom (the green dots) displays the weighted average yield reported by TRACE on the same day. The highest yield recorded by TRACE is denoted by the red dots. The black dots and the black line show the yield derived from using trade-weighted data to fit the credit spread for the company.

The liquidity premium built into the yields of Ford Motor Company above and beyond the "default-adjusted risk free curve" (the risk-free yield curve plus the matched maturity default probabilities for the firm) is quite different than we have seen with other issuers. Ford Motor Company bonds currently offer a liquidity premium that narrows as the maturity lengthens and which barely exceeds the sum of the risk free yield and Ford Motor Company's default probability. One can confirm that the 4.75% bonds due January 15, 2043, which cause the credit spread to narrow, are not callable. We explain in more detail below. 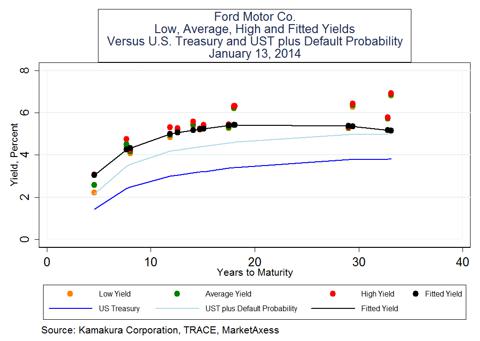 The high, low, average, and trade-weighted credit spreads at each maturity are graphed below. The credit spreads peak at about 15 years to maturity and narrow after that. We have done nothing to smooth the data reported by TRACE, which includes both large lot and small lot bond trades. For the reader's convenience, we fitted a cubic polynomial that explains the trade-weighted average spread as a function of years to maturity. This polynomial explains 47.5% of the variation in the average credit spread over the maturity term structure. 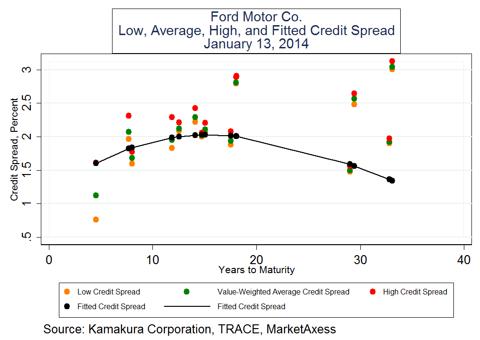 We reproduce the calculated reward to risk ratios for September 13, 2013 in this chart: 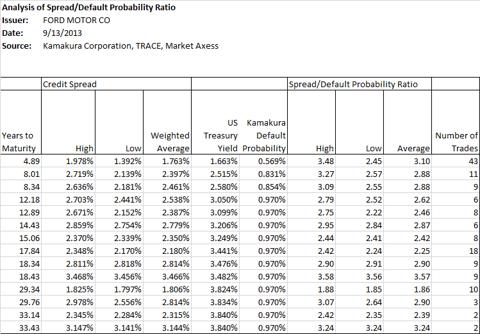 The credit spread to default probability ratios are shown in graphic form here. 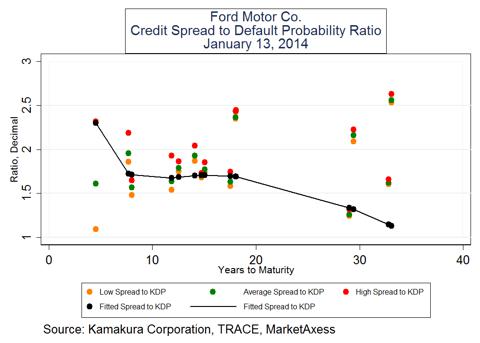 Ford Motor Company ranked 69th among all reference names in weekly credit default swap trading volume during this period, which is graphed below: 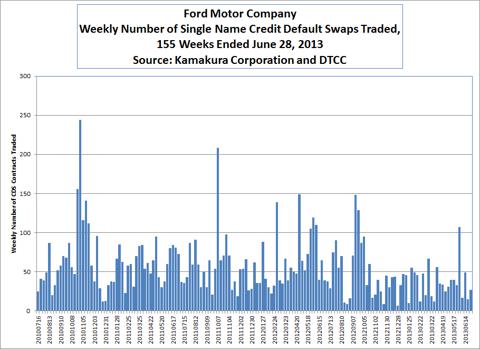 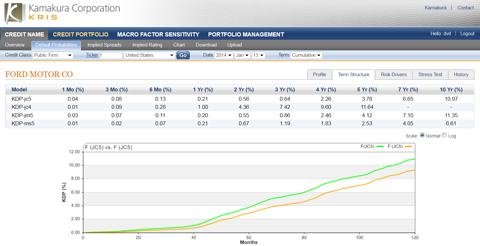 The rise in default probabilities since September 13, 2013 is shown in this graph:

Ford Motor Company can be compared with its peers in the same industry sector, as defined by Morgan Stanley and reported by Compustat. For the USA "autos and components" sector, Ford Motor Company has the following percentile ranking for its default probabilities among its 58 peers at these maturities:

The percentile ranking of Ford Motor Company default probabilities at one month through one year is in the riskiest half of the peer group. The percentile ranking for Ford Motor Company at 3 through 10 years is in the second safest quartile of the peer group. Taking still another view, both the actual and statistically predicted Ford Motor Company credit ratings are barely "investment grade" by traditional credit rating standards of Moody's Investors Service and the Standard & Poor's affiliate of McGraw-Hill. The statistically predicted rating is one notch higher than the legacy rating. Over the last decade, legacy ratings have changed 11 times compared to the daily changes in the default probabilities shown above. 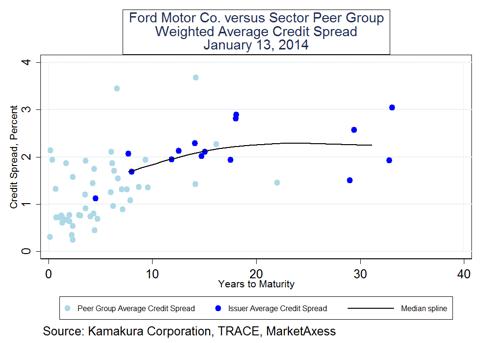 Among the sector peer group whose bonds traded on January 13, 2014, default probabilities for Ford Motor Company were at the top of the peer group. 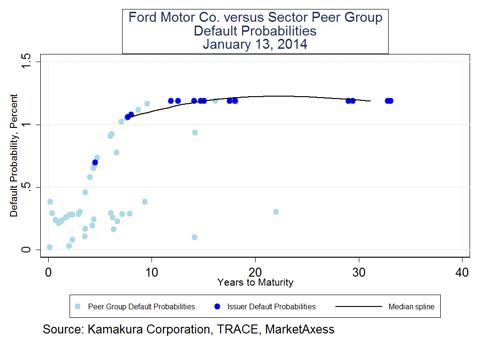 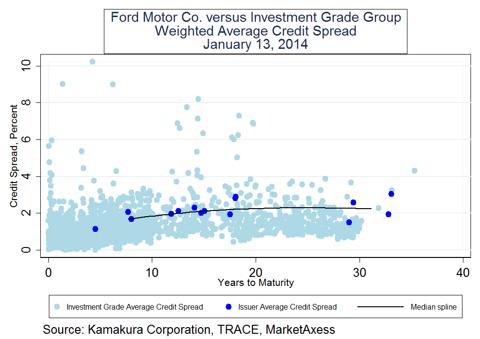 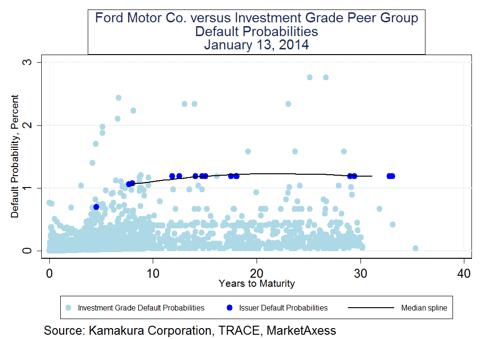 We believe that a small majority of analysts would rate Ford Motor Company as investment grade. In spite of the "upgrade" of a Ford legacy rating in September, the market is moving against Ford: the stock price is flat to down, default probabilities are up, and credit default swap trading volume is up.

From a bond risk and return point of view, Ford Motor Company bonds offer a ratio of credit spread to default risk that is below average. Like AT&T (T), featured in another Kamakura research report, we continue to speculate that the iconic nature of the Ford brand name has led investors to overprice the bonds of Ford.

Regular readers of these notes are aware that we generally do not list the major news headlines relevant to the firm in question. We believe that other authors on Seeking Alpha, Yahoo, at The New York Times, The Financial Times, and the Wall Street Journal do a fine job of this. Our omission of those headlines is intentional. Similarly, to argue that a specific news event is more important than all other news events in the outlook for the firm is something we again believe is inappropriate for this author. Our focus is on current bond prices, credit spreads, and default probabilities, key statistics that we feel are critical for both fixed income and equity investors.

The Kamakura Risk Information Services version 5.0 Jarrow-Chava reduced form default probability model makes default predictions using a sophisticated combination of financial ratios, stock price history, and macro-economic factors. The version 5.0 model was estimated over the period from 1990 to 2008, and includes the insights of the worst part of the recent credit crisis. Kamakura default probabilities are based on 1.76 million observations and more than 2000 defaults. The term structure of default is constructed by using a related series of econometric relationships estimated on this data base. An overview of the full suite of related default probability models is available here.

Section 939A of the Dodd-Frank Act states the following:

(A) AGENCY REVIEW.-Not later than 1 year after the date of the enactment of this subtitle, each Federal agency shall, to the extent applicable, review-

(1) any regulation issued by such agency that requires the use of an assessment of the credit-worthiness of a security or money market instrument; and

(2) any references to or requirements in such regulations regarding credit ratings.

(C) REPORT.-Upon conclusion of the review required under subsection , each Federal agency shall transmit a report to Congress containing a description of any modification of any regulation such agency made pursuant to subsection .

The new rules issued by the Office of the Comptroller of the Currency in accordance with Dodd-Frank are described here. The summary provided by the OCC reads as follows:

"In this rulemaking, the OCC has amended the regulatory definition of 'investment grade' in 12 CFR 1 and 160 by removing references to credit ratings. Under the revised regulations, to determine whether a security is 'investment grade,' banks must determine that the probability of default by the obligor is low and the full and timely repayment of principal and interest is expected. To comply with the new standard, banks may not rely exclusively on external credit ratings, but they may continue to use such ratings as part of their determinations. Consistent with existing rules and guidance, an institution should supplement any consideration of external ratings with due diligence processes and additional analyses that are appropriate for the institution's risk profile and for the size and complexity of the instrument. In other words, a security rated in the top four rating categories by a nationally recognized statistical rating organization is not automatically deemed to satisfy the revised 'investment grade' standard."

Additional disclosure: Kammakura Corporation has business relationships with a number of firms mentioned in the article.

Donald R. van Deventer is a Managing Director in the Center for Applied Quantitative Finance at SAS Institute, Inc. Prior to the acquisition of Kamakura Corporation by SAS on June 24, 2022, Dr. van Deventer was the Chairman and Chief Executive Officer of Kamakura Corporation. He founded the Kamakura Corporation in April, 1990. The second edition of his book, Advanced Financial Risk Management (with Kenji Imai and Mark Mesler) was published in 2013.  Dr. van Deventer was senior vice president in the investment banking department of Lehman Brothers (then Shearson Lehman Hutton) from 1987 to 1990. During that time, he was responsible for 27 major client relationships including Sony, Canon, Fujitsu, NTT, Tokyo Electric Power Co., and most of Japan's leading banks. From 1982 to 1987, Dr. van Deventer was the treasurer for First Interstate Bancorp in Los Angeles. In this capacity he was responsible for all bond financing requirements, the company’s commercial paper program, and a multi-billion dollar derivatives hedging program for the company. Dr. van Deventer was a Vice President in the risk management department of Security Pacific National Bank from 1977 to 1982. Dr. van Deventer holds a Ph.D. in Business Economics, a joint degree of the Harvard University Department of Economics and the Harvard Graduate School of Business Administration. He was appointed to the Harvard University Graduate School Alumni Association Council in 1999 and served through 2021. Dr. van Deventer was Chairman of the Council for four years from 2012 to 2016. From 2005 through 2009, he served as one of two appointed directors of the Harvard Alumni Association representing the Graduate School of Arts and Sciences. Dr. van Deventer also holds a degree in mathematics and economics from Occidental College, where he graduated second in his class, summa cum laude, and Phi Beta Kappa. Dr. van Deventer speaks Japanese and English.