After the Business News Network [BNN] interview on Mar. 18 (see previous post), famed currency and commodities investor Jim Rogers made an appearance at Bloomberg the following day (see clip below).

While he still maintains the call of another even deeper recession in the next few years, and $2,000 gold in ten years, he did say expect a gold bubble by the end of the bull market. In addition, Rogers also talks about the euro and prospect of Greek Bailout.

There Will Be A Greek Bailout

Rogers sees either the European Union [EU] or the International Monetary Fund [IMF] will bail out Greece. However, Greece should be left bankrupt, so the member countries in the monetary union could get a wake up call and be more disciplined about spending. Then, the euro could conceivably compete with the dollar, which is the unlikely situation now.

The credit default swaps [CDS] are actually good for Greece right now, as they provide some incentive for investors to finance Greek debt. Speculators are not the root cause of the Greece debt crisis as they are just reacting to what Greece's politicians have done. The proposal to ban CDS in Europe is unlikely to help with the deep debt hole Greece has dug itself into.

Rogers owns "massive amount of short positions" of euro, but does not have any positions in sterling. He believes the prospect of sterling is "very bad" on a long term basis due to huge balance of trade deficit. He does not expect to own sterling "in his life time."

My Take on The Euro

Broad based euro weakness is still expected in near to medium term, against dollar, yen and especially the commodity currencies. However, a Greek bailout resolution should eventually surface despite the spat within the EU. From this perspective, the euro is currently oversold and should have a snap back when the bailout finally emerges. 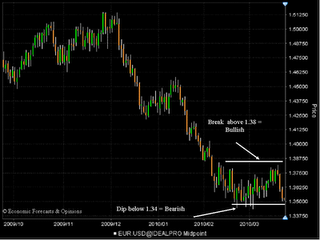 Technically, a break above $1.38 levels would confirm and trigger the bullish momentum. On any pullback, a dip below the $1.34 levels should be taken as a sell signal.

Rogers says he is not buying equities right now "anywhere in the world". But he sees a potential correction coming, and might get into the markets if correction is around 20% or 30%.

Agriculture commodities would be good to invest now as they are still off the all time high. Precious metal wise, silver, palladium and platinum seem more reasonably priced as compared with gold. Energy wise, he would invest in natural gas instead of oil now for Rogers.

Base Metals Not A Buy Now

While he admittedly does not pay attention to iron ore, since it does not have a futures market, he does think steel is of huge demand with constrained supply. However, he will not buy into base metals right now as the prices have sky rocketed. He has investment in base metals, which has appreciated well, but he will not sell them right now. On copper, he made a "hold" recommendation.

EconMatters
37.34K Followers
EconMatters at http://econmatters.com is a syndicated financial content site focusing on global economic and market analysis that matters to investors.