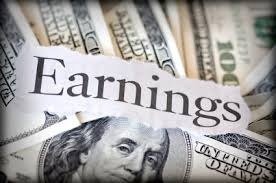 A couple of years ago I finally realized that I like earnings season.

Part of that realization was out of necessity as it seems that earnings season never ends, so it just can't be avoided. Of the companies that I regularly follow, no sooner does LuLuLemon Athletica (LULU) report its earnings that Alcoa (AA) traditionally kicks off the next season just two weeks later.

The way I now look at things earnings season accounts for about 85% of the year, so it has become a case of just learning to live with it instead of fearing the potential for swings. The problem with a buy and hold approach is that the investor is often held hostage to the wild price swings that accompany earnings and can see paper profits quickly erased as the mountain has to be newly re-climbed.

One of the nice things about using a covered option strategy is that you can, to a degree, determine what your exposure to earnings risk or reward is through the use of varied expiration dates. For existing holdings that you believe may have difficulty withstanding an earnings report, the use of a longer option contract can give you more downside protection due to the larger premium, as well as additional time for shares to recover, if indeed they fail to hold the line.

You can also use shorter-term options in the hope of being assigned out of a position in advance of earnings.

Of course, there is the more adventurous route, akin to being a storm chaser. You can meet earnings head on and purposefully trade in a stock just for the earnings related move.

While there are many ways to do so, I prefer the sale of out of the money put options and use the "implied volatility" as my guide, along with my objective of a 1% ROI on an investment that is hoped to last only for the week. Where possible I try to find a strike price that is outside the range suggested by the implied volatility, yet still offers a 1% or greater ROI.

Generally, only stocks that ordinarily trade with a high degree of volatility will be candidates for such an earnings related trade and have exhibited very large earnings related moves in the past.

This coming week is going to be a busy one as far as high profile companies go that may fit the above criteria. Among the companies that I am considering this coming week are Apple (AAPL), Amazon (AMZN), Blackstone (BX), Chipotle Mexican Grill (CMG), Facebook (FB), Las Vegas Sands (LVS), MasterCard (MA), Phillips 66 (PSX), Seagate Technology (STX), VMware (VMW) and Yahoo! (YHOO).

One thing that really appeals to me about earnings season is that it's a time that I don't really think about macroeconomic nor microeconomic issues. I simply focus on the numbers and the past history of price movements in that particular stock, especially in the aftermath of previous earnings reports.

As a general rule, my preference is to sell puts when there is already an indication of price weakness. I look at any decline in share price in advance of earnings to be similar to a down payment and the sentiment that evolves as shares are already moving lower is often to increase the premium that can be obtained for the sale of puts and may also allow the use of even lower strike prices while getting a relatively larger option premium. Following this past Friday's (January 24, 2014) 300 point loss in the DJIA, that isn't terribly difficult.

The caveat is that you must be either willing to own the shares if assigned or be willing to manage the options contract until some resolution is achieved. That could mean rolling the option contract forward and hopefully to a lower strike or accepting assignment and then selling calls until assignment of shares. 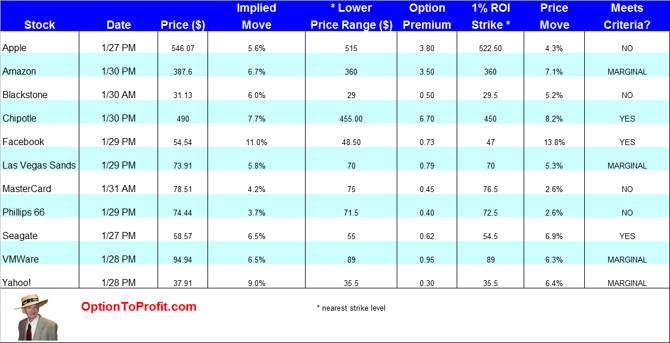 The table above may be used as a guide for determining which of selected companies may meet the risk-reward parameters that an individual sets.

However, there are also times when, despite what appear to be acceptable rewards I don't make the trade prior to earnings, but rather look for companies on the radar screen that find their shares on the losing end after announcement and guidance. That is especially true for those positions that don't meet criteria or only do so marginally.

In such cases, I consider the sale of puts after the initial plunges, as often the premium is enhanced as sentiment assumes the importance that uncertainty previously held in maintaining the premium level.

Just a few days ago it appeared that the market was going to solely focus on earnings and fundamentals, just like in the old days. The coming week, in addition to perhaps being more responsive to earnings than in the past years, is suddenly also subject to many other winds, including more fallout from China, Turkish monetary woes, Argentinian debt and worries regarding the FOMC response to the current snapshot of the economy.

As a result, earnings related trades may also be impacted by those macroeconomic factors and I would be inclined to stay away from "marginal" selections and be increasingly inclined to consider trades after earnings, especially if prices have taken a strong downward move in response.

Disclosure: I am long LULU. I wrote this article myself, and it expresses my own opinions. I am not receiving compensation for it (other than from Seeking Alpha). I have no business relationship with any company whose stock is mentioned in this article.

George Acs
3.4K Followers
I am a simple individual investor who believes that the playing field is level, but may require active management of one's holdings. I've devised a series of steps that constitute a highly defined covered option strategy that most anyone can follow and that I've described in Option to Profit (2011). Having retired from a career in Pediatric Dentistry, approximately 10 years ahead of schedule, after spending the previous 10 years working just 2 1/2 days each week, I now spend my time trading.For almost 5 years I alerted others of trading opportunities in large cap positions through the Option to Profit subscription service, a premium subscription service that provided actionable Trading Alerts via text messaging or e-mail at my old site www.optiontoprofit.com. As of January 2, 2017, the site  and the name "Option to Profit" are no longer mine. as I've again joined the dark side and taken the easy money. But I've returned to my blogging roots on January 2, 2017 by resurrecting the old TheAcsMan.com ad supported web site, open to all.That, too, ended and the new, subscriber based LEAPtoProfit.com which launched July 2018 and is geared to the less active trader who is either shifting into a "buy and hold" strategy, as am I in this next to final stage of my investing career or seeks to milk an existing "buy and hold" portfolio.Current;y. the LEAPtoProfit p[ortfolio is fully invested and the paywall has been removed until December 2019 when I expect an infusion of cash from position assignments.Ultimately, I hope to make my stock portfolio improve the quality of my life. Whatever stage of life you are in, you can make your stocks improve that quality by putting them to work for you and perhaps LEAPtoProfit can be part of that process.
Follow
38 Comments