The pathway of upward mobility in the postwar era was straightforward: a college degree and home ownership. The upward-mobility value of home ownership is now in doubt.

In the postwar period of 1945-2005, the way to move up in America was to earn a college degree and become a homeowner. By several measures, upward mobility has ceased to be a standard feature of American life: Is America's Middle Class Going the Way of China? (Cam Hui)

The article compares present-day America with the Communist Party-dominated People's Republic of China, and concludes both are run by small financial and political Elites which are largely inherited positions.

Yes, Ivy League universities are still pathways to power and wealth, but these are essentially Upper Caste positions which serve the interests of the Power Elites, doing the dirty work and the heavy lifting of the status quo.

In the good old days circa 1945-2005, buying a house opened up a much broader pathway to upward mobility than a slot in an Elite university. Regardless of one's education or job, if you could buy a house, then the big tax breaks of homeownership began cutting one's taxes while increasing the "savings" in home equity. Even without any appreciation, a mortgage was still a type of forced savings; the accumulated equity could be passed on to one's children when the mortgage was paid off.

Inheritable wealth defines "middle class": poor people don't have any assets to pass on, and so three generations later, the family is still poor. Families which accumulated assets in the form of the family home became middle-class by accumulating the foundations of wealth for future generations.

As the saying goes, it takes three generations to produce a musician.

Now the average American household has little to no equity. The equity was either squandered in big-spending drawdowns of equity via home equity lines of credit, or it was lost in "moving up" in the housing bubble to costly big homes which have since deflated in value, wiping out the household equity--perhaps equity that had slowly been accumulated over three generations. (Click to enlarge) 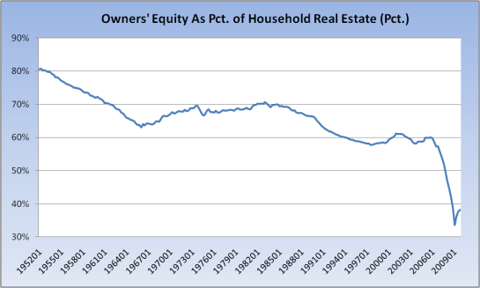 This is the total equity of all household real estate, which includes the 1/3 of homes owned free and clear. According to the U.S. Census Bureau, there were 51,487,282 housing units with a mortgage and 23,875,803 Housing units without a mortgage as of 2008.

There is no way to ascertain the value of the mortgage-free homes, but if we reckon they are roughly equivalent to homes with mortgages, then we would have to conclude that the equity in free-and-clear homes is roughly 32% of real estate owned.

(Given that it is often wealthy households which own homes outright, it may well be that the 24 million homes owned free-and-clear make up a far larger share of equity than the raw number of homes might suggest.)

That means there is at best 6% equity in the other 51 million homes with mortgages. Total equity is 38%, deduct the 32% in non-mortgaged homes, and that leaves 6% spread amongst the 51 million mortgaged homes.

In effect, there is no inheritable wealth left in most mortgaged homes. Many homes have negative equity--they are worth less than their mortgages--so perhaps the equity in some of the 51 million mortgaged homes is higher than 6%.

Nonetheless, a quick look at the chart reveals the awful truth: inheritable wealth held in household real estate has plummeted from 70% of total value to 38%. In essence, only those households who own valuable homes free and clear have any wealth to pass on to their offspring. 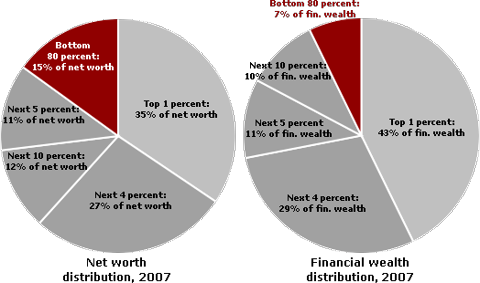 If we look up all the gory details in the Fed Flow of Funds, we find that household real estate fell from $23 trillion in 2006 to $16.5 trillion at the end of 2009. That is a decline of $6.5 trillion, more than half the total $11 trillion lost in the credit/housing bust. 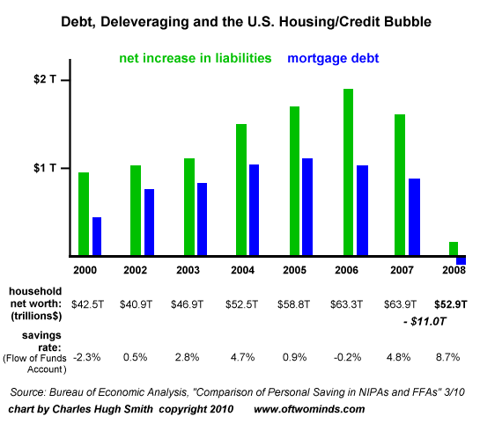 That leaves about $1 trillion--a mere 1.85% of the nation's total net worth-- of equity in the 51 million homes with mortgages.

That is a staggering conclusion, for it suggests that the bottom 80% of the nation's households which own a home have virtually no inheritable wealth left in their homes. And without that equity, what foundation of wealth is left? Their 7% share of the nation's financial wealth? That is 7% of $45 trillion, or $3 trillion, including all stocks, bonds and securities in IRAs, 401K retirement funds, savings and other accounts.

Now, in the post-bubble phase, things look bleak. While there are no drivers for real estate appreciation, there are four trends driving further depreciation of housing:

1. The Balance Sheet Recession which the U.S. is deeply mired in and which it cannot escape without writing off trillions in bad debt, uncollectible derivatives, defaulted home mortgages, distressed commercial real estate mortgages and junk corprorate debt. The Age of Balance Sheet Recessions: What Post-2008 U.S., Europe and China Can Learn from Japan 1990-2005 (Richard Koo)

2. The demographics of the Baby Boom selling off their big suburban homes and second homes, while the generations behind them have poor job prospects, higher taxes and fewer numbers of potential buyers.

3. Interest rates are rising, which is negative for housing valuations.

4. If inflation kicks in and housing stays nominally flat, owners will see the purchasing power of their equity eaten away, as occurred in the 1980-84 period when housing values flattened as interest rates rose but inflation continued eating away at equity.

I address these three issues in Three Challenges to a Recovery in Housing.

These macro-trends effectively end the entire notion that buying a house is a path to inheritable wealth and upward mobility.

Charles Hugh Smith
4.33K Followers
Charles Hugh Smith writes the Of Two Minds blog (www.oftwominds.com/blog.html) which covers an eclectic range of timely topics: finance, housing, Asia, energy, longterm trends, social issues, health/diet/fitness and sustainability. From its humble beginnings in May 2005, Of Two Minds now attracts some 200,000 visits a month. Charles also contributes to AOL's Daily Finance site (www.dailyfinance.com) and has written eight books, most recently "Survival+: Structuring Prosperity for Yourself and the Nation" (2009) which is available in a free version on his blog.
Follow
178 Comments