A previous article about the VelocityShares Daily Inverse VIX Short-Term ETN (NASDAQ:XIV) explained the impact of contango, and how it may help reducing the risk and boosting the return (click here to read). If VXX spikes more than 100% since the previous close, XIV theoretical value becomes negative. Termination (named "acceleration") must prevent losses for the issuer. The only measurable acceleration event described in the prospectus is an intraday loss of 80% from prior day close.

...an Acceleration Event includes any event that adversely affects our ability to hedge or our rights in connection with the ETNs, including, but not limited to, if the Intraday Indicative Value is equal to or less than 20% of the prior day's Closing Indicative Value.

...you will receive a cash payment in an amount (the "Accelerated Redemption Amount") equal to the Closing Indicative Value on the Accelerated Valuation Date.

(Quotes from the prospectus)

To find out what kind of event could kill XIV, my first idea was looking for a relation between VIX and XIV daily returns. For XIV, I have used a synthetic price calculated with the underlying index methodology from 4/26/2004 until inception date (11/29/2010), then the real market price until 01/14/2014. Here is the result: 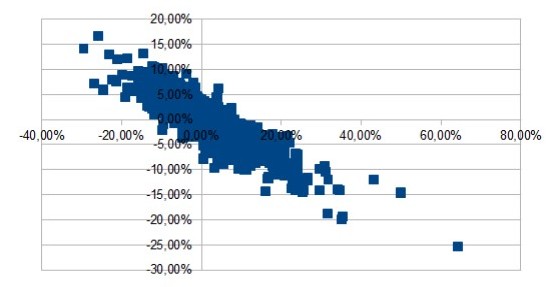 The horizontal axis is the VIX daily gain/loss, the vertical is XIV. These are the returns on close for over 2400 days. I will make the hypothesis (a little bit hazardous) that intraday returns stay in the same distribution law. A rigorous scientist would look for a probability density function or confidence intervals. I propose a heuristic solution with a simple graphical pattern: 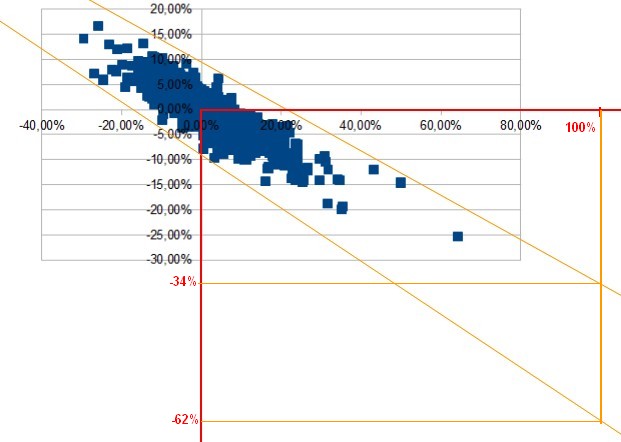 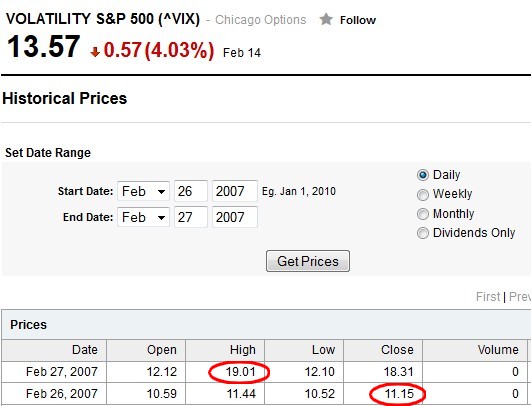 The official number based on historical data is 70.5%, but doing blog-archeology, I have found here comments claiming a 100% reading at some point in the day. It was probably a computer glitch, and official data might have been corrected later. However, people have traded and taken decisions with this reading.

As a consequence, no VIX spike could have killed XIV since the underlying futures exist. Let's figure out what kind of VIX spike corresponds to a 80% daily loss in XIV: 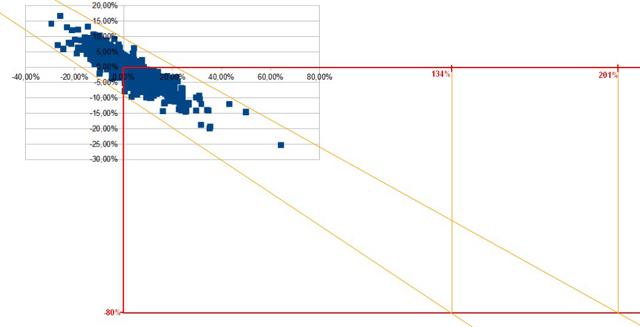 XIV might be terminated at a VIX daily gain of 134% or above, and would be dead with a very high probability after 200%. In a low volatility period, 134% might be a jump from 10 to 23.4. This is a possible flash-crash scenario.

The VIX index was launched in 1993, and its methodology changed in 2003. The current methodology data are under the VIX ticker, the former methodology data under VXO. VIX data are available from 1990, VXO data from 1986. The following chart shows that both indexes are used to making their peaks simultaneously with a similar amplitude:

VXO looks a very good proxy to figure out what would have happened to VIX in 1987 on the Black Monday event. 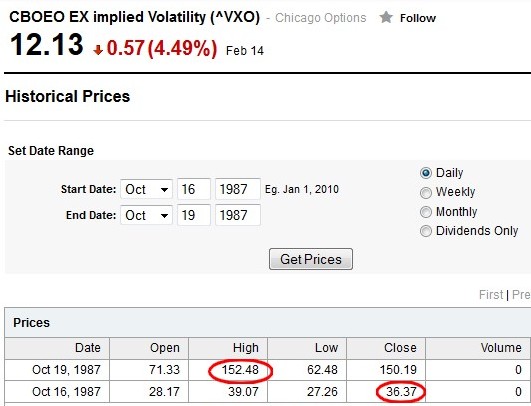 It was a daily volatility spike of +319%. It would kill XIV with no doubt, and half of that move is enough to enter the lethal zone. VXO was already close to +100% on open. If XIV had existed, selling it on open would have probably incurred an overnight loss of 30% to 60%.

If I understand correctly the prospectus, XIV termination value is fixed on close of termination day. In this case, VXO was at +313% on close. If I consider that the graphical model is still valid on this point, the share price would have been between -130% and -175% of prior close, so theoretically negative. Even if the model is not valid so far of the data sample, my guess is that XIV would have been at best close to zero. 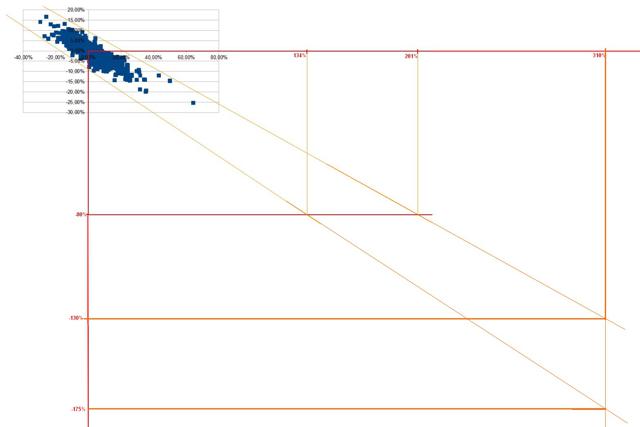 As an ETP share price cannot be negative, shareholders would lose 100%, the rest of the loss being theoretically for the issuer. But I am quite confident that they are smart enough to avoid a loss. In this Black Monday scenario, if they cover or hedge all underlying futures positions before XIV is at -100%, it is even an opportunity for them to make a profit.

If there was a volatility spike equivalent to 1987 Black Monday, XIV would be very likely terminated without residual value for shareholders. In a low volatility period, a flash-crash scenario with VIX surging from 10 to 24 from close to next day high might terminate XIV. It is an additional reason why only investors with proven discretionary trading skills or a systematic model should consider buying XIV. As no skill or model is a 100% guarantee, it is also a reason to adopt a conservative risk management, in particular regarding position sizing.

Disclosure: I have no positions in any stocks mentioned, but may initiate a long position in XIV over the next 72 hours. I wrote this article myself, and it expresses my own opinions. I am not receiving compensation for it (other than from Seeking Alpha). I have no business relationship with any company whose stock is mentioned in this article.

Fred Piard
14.53K Followers
Author of Quantitative Risk & Value
Data-driven portfolios and risk indicators.
Author of Quantitative Risk & Value and three books, I have been investing in systematic strategies since 2010. I have a PhD in computer science, an MSc in software engineering, an MSc in civil engineering and 30 years of professional experience in various sectors. My aim is making simple and efficient quantitative investing techniques available to my followers. Quantitative models can make investment decisions faster, reproducible and emotionless by focusing on relevant information in the middle of market noise. Moreover, models can be refined to meet specific risk tolerance and objectives.

I am an individual investor and an IT professional, not a finance professional. My writings are data analysis and opinions, not investment advice. They may contain inaccurate information, despite all the effort I put in them. Readers are responsible for all consequences of using information included in my work, and are encouraged to do their own research from various sources.