Google (NASDAQ:GOOG) is keeping the pressure on Comcast (CMCSA) and AT&T (T) by identifying 34 new cities in 9 metropolitan areas to expand Google Fiber. Google Fiber offers download speeds up to 1 gigabit and is roughly 100 times faster than normal broadband speeds. Previously, I wrote an article on how Google Fiber's launch in Austin, Texas forced AT&T roll out its new high-speed internet, GigaPower, in an attempt to dissuade customers from jumping over to Google. Now, Google is raising the stakes and looking to expand its market to potentially 34 new cities. 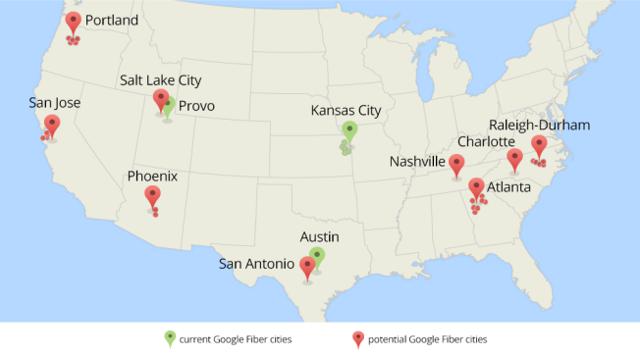 Early on, many analysts saw Google's venture into high-speed internet as nothing more than a marketing gimmick, but this move for a massive expansion in 9 new metropolitan areas shows how serious Google is about becoming a major player and pushing the envelope on high-speed broadband. What's remarkable about Google's strategy is the willingness of cities to work directly with the company and offer a slew of benefits that ordinary companies don't get. For instance, hundreds of cities applied to take part in Google Fiber, and cities must be willing to dedicate resources to speed-up the installation process to make the project cost-effective for Google. This is key to Google's plan to crack into a market already saturated with dominant players like Comcast and AT&T.

As of December 31, 2013, AT&T had 10.7 total U-verse subscribers, which was an increase of 2.7 million subscribers from 2012. Revenues increased from $9.2 billion in 2012 to $12.0 billion in 2013. AT&T is also trying to make a push to increase download speeds and increase its fiber connections. During 2013, the company reached 250,000 new businesses with fiber and saw two-thirds of U-verse customers with download speeds of 45 Mbps. While this is still nowhere close to Google Fiber speeds, AT&T is making it a point to address broadband speeds and fiber connections. AT&T U-verse services account for roughly 10% of AT&T's total revenue.

AT&T U-verse is available in all nine of Google's targeted 9 metropolitan areas, and either Comcast or Time Warner Cable has a presence in all 9 areas. It's clear Google is pressing these companies to be competitive with Google Fiber's 1 gigabit broadband speed. When Google Fiber announced its launch in Austin, Texas, AT&T quickly announced it would offer speeds of up to 1 Gbps by mid-2014. It will be interesting to see how these major players will respond to Google further encroaching on their territory.

In total, Google Fiber is looking to expand in 9 major markets that have a combined population over 11 million people. AT&T and Comcast won't sit back and watch Google eat up their market share. AT&T has already shown it is ready and willing to compete in select cities with Google. However, additional costs to grow the fiber infrastructure in select cities will eat into profit margins. Otherwise, if it sits back and does nothing, it runs the risk of losing customers and revenue.

It's widely assumed Google is taking on this initiative not to become a dominant player in the high-speed broadband market, but to make companies improve their internet speeds so Google can process data at much higher rates, and in turn, make more money. 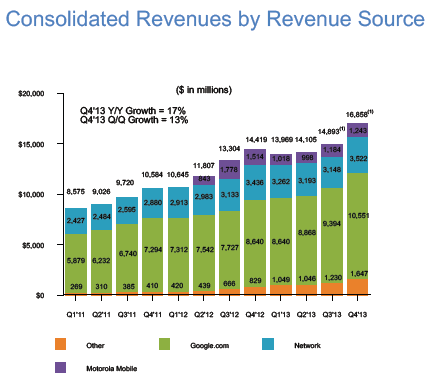 Despite the wide variety of new ventures Google has entered over the last few years, Google search and display advertising remain the company's bread and butter. The Google.com segment accounts for nearly two-thirds of Google's revenue. Forcing the largest broadband providers to increase their internet speed through competition is the easiest way for Google to grow its largest business segment. For Comcast and AT&T, it's a double-edged sword, if they invest in fiber infrastructure in major metropolitan cities, they will drive up revenue for Google's biggest money-maker, and at the same time, drive up their own costs. If they do nothing, they run the serious risk of losing meaningful market share to Google.

Evercore Partners, an independent investment banking firm in San Francisco, predicted Google could build out its network for a cost of $7 billion and reach 8 million homes. Evercore isn't alone in its thinking. A Goldman Sachs analyst estimated Google could reach 830,000 homes at a cost of $1.25 billion a year. Over 9 years, Goldman predicts Google Fiber could reach 7.5 million homes for a cost of $10 billion. Evercore analyst, Ken Sena summed up Google's strategy saying,

"Done selectively, Google Fiber has the potential to deliver a modest standalone return in addition to providing positive benefits to Google's broader business in promoting faster industry speeds and accessibility, migrating more TV viewing and online behavior onto Google's cloud, and paving the way for YouTube, Google Play and other Google experiences to become a bigger part of the TV home viewing experience, even outside of fiber-deployed areas."

Clearly, these companies are massive and have the operating cash flow to support large infrastructure build-outs, but what really stands out is Google's cash on hand. Google has over 10 times as much cash as Comcast and nearly 18 times more than AT&T. With analysts estimating $7-$10 billion to reach 7.5-8 million homes by 2022, Google clearly has the cash and strong profit margins to make a very aggressive push in the high-speed broadband market.

AT&T's wireline business segment had an operating income margin of 10.7% in 2013, down from 12.2% in 2012. If AT&T continues to launch GigaPower wherever Google Fiber is launched, it will need to spend hundreds of millions of dollars in fiber infrastructure to compete with Google. AT&T will see declining margins if it pursues this strategy. While total revenues from business customers was down 3.3% in 2013, the company saw 17.4% growth in its next-generation strategic business services, which include VPN, Ethernet, cloud services, and advanced IP services. AT&T sees the writing on the wall. Business customers are already demanding advanced broadband services, and it's just a matter of time before residential customers demand higher bandwidth to stream and download TV shows and movies.

Comcast Cable Communications saw an operating cash flow margin of 41.1% in 2013, which was essentially flat over 2012. Comcast has already seen customers dissatisfied with its limited bandwidth. Just last week, Netflix and Comcast signed an agreement so Comcast customers can stream Netflix without buffering interruptions that have plagued Comcast in the past. When Google Fiber goes head-to-head with Comcast or Time Warner Cable in these select markets, customers may be eager to jump ship since they have already seen problems with Comcast's limited bandwidth in the past. If Comcast decides to take a competitive approach to Google, it too will need to spend hundreds of millions of dollars to increase its bandwidth, and in turn, it will eat into its high operating margin. Comcast is already seeing customers starting to switch to its more advanced broadband services. 57% of its video customers enrolled in advanced services and 36% of its internet customers have switched to its high-speed internet. These are the customers Comcast would be worried of losing to a competitor with a superior product, such as Google Fiber.

Google employs some of the brightest minds in the world. Its strategy of forcing broadband providers to expand upon and invest in their broadband network or run the risk of losing customers to Google Fiber is brilliant. While Google Fiber is only currently deployed in select cities, it is clear that Google isn't content to sit back and let the large broadband providers dictate internet speeds to customers. Google has a clear vision that has the potential to pose a serious threat to large established providers like Comcast and AT&T. If Google delivers on its strategy, as analysts predict, Google Fiber has the potential to be nearly as large as AT&T U-verse by 2022 and bring in nearly $10 billion a year in subscriber fees alone. Google will announce which metropolitan areas it will be expanding to by late 2014. Until then, it will be interesting to see if the large providers will improve their infrastructure in those cities, as AT&T did when Google Fiber came to Austin.