For you economists, oil from Alberta is not cheap. It must reflect the massive amount of engineering required to establish a tar sands mining operation, and, the energy cost of cooking oily dirt to extract oil.

For peak oil folks, that the world must turn to tar sands is just one more confirmation that the cheap conventional crude is now in decline. So what to do? First, let’s take a look at North America oil supply over the past 20 years. This is the oil produced by Canada, the US and Mexico (): 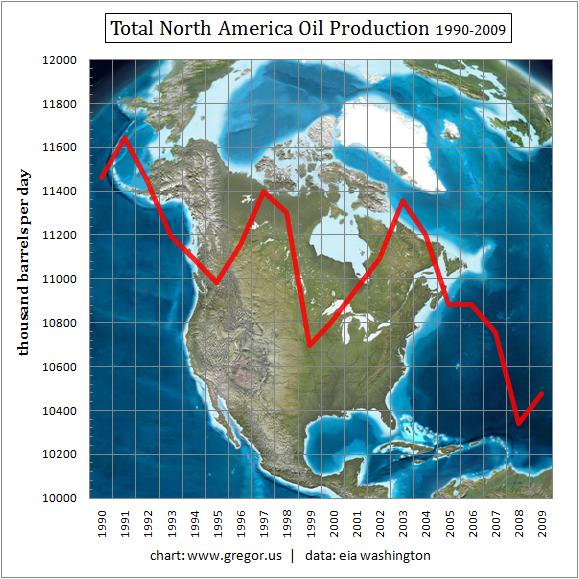 Here in United States we like to outsource the extraction of our oil supply to anyone but ourselves. We don’t particularly want to see the results of our own demand for liquid fuels, the pull from our 300 million vehicles and our four million miles of highways. We’d prefer that someone else–preferably far away–despoil their own landscape. And we’ve done quite a good job over the past several decades to make sure that’s happened, as the amount of oil we’ve had to import from the Mideast, from Africa, from Mexico and Canada has skyrocketed. This background is helpful in framing the BP well blowout in 5000 feet of Gulf deepwater. The reality of our oil demand has now touched home. In fact, it’s washing up on our coastline.

In the previous world of Ricardian Comparative Advantage, the decline of North American oil supply didn’t matter so much. But now that oil is no longer a cheap widget that can be efficiently sourced globally, regional and domestic supplies have started to matter. Whether or not you agree with solutions like the Pickens Plan (opens to video page at the recent Milken conference), you at least have to give Mr Pickens credit for identifying the problem: a very nasty mechanism, if you will, of increased capital outflows for increasingly expensive global oil is now at work like a buzz saw on the US economy. And it’s only going to get worse from here.

If the solution to a problem is unsufficiently scaled to the size of the problem, then at best we can say it’s a token solution. And token solutions are what the US has been trying out for 40 years, on the matter of energy. 8 billion for High Speed Rail? Sorry, but the restoration of rail in this country is an 800 billion dollar project and that would be just for the first wave. Adoption of electric vehicles, as part of some cultural need to maintain US car culture? Sure, at realistic adoption rates you might be running mostly on EVs in 150-200 years. Switch the powergrid to 100% renewable resources like Wind and Solar in ten years? Not likely. But maybe if you are willing to withdraw the entirety of US armed services from overseas, devote the entire military budget for 10 years, and match that workforce with highly skilled workers from the private sector, then maybe you can make a dent by 2020.

When a politician tells you they want to solve for climate change while investing heavily in automobiles and highways, rest assured that is decidedly unserious. When former politicians claim you can have an all renewable powergrid in ten years, that is not helping anyone. When academics tell you that we can be operating in an all renewable world by 2030, but have nothing in their model to account for the energy needed to build that new world, that is simply not good enough. Nota bene: nearly all energy transition plans and especially plans to transition to alternative energy depend on economic growth. All those models assume there will be a sufficient inventory of growth that can be redirected to a different energy architecture. As you contemplate this, also realize that to construct a lower carbon-emitting future poses a question: what is the energy source that will be used, to conduct energy transition?

Perhaps a glance back up at the chart of North American oil supply will help clarify the problem. The United States occupies an enormous swath of the continent, and has added most of its current built environment during the fossil fuel era. The country was built on coal and oil.

Indeed, it’s still running on coal and oil. And the intractability of this infrastructure is why energy transition is so hard. It is unserious therefore to say that it will be easy or quick to start running it on different energy sources. And I would suggest that anyone who makes that claim, or naively supports those who do, should be disqualified from the conversation.

If you want political traction on climate change or peak oil issues–which are both problems of energy transition—then only an accurate confrontation with scale and time will suffice to make contact with the problem.

Gregor Macdonald
1.15K Followers
Gregor Macdonald is an oil analyst and energy sector investor, who also focuses on the coming transition to alternatives. He has spent this decade researching and investing in the energy sector. While his focus remains on global fossil fuel supply, he has developed several models for transition to The Grid, as the world migrates from autos, to public transport. Solar, Wind, Nuclear and other sources of new supply to The Grid will also be a focus of his writing.