Sentiment in the crude oil market has been quite pessimistic lately after some disappointing economic data fueling fear over the strength of the U.S. recovery, and signs of a possible China slowdown. This is on top of the market distress already exerted by the European sovereign debt and banking crisis.

Oil price was down 8% for the week, with the front-month August delivery settled at $72.14 a barrel on the New York Mercantile Exchange.

Crude oil prices have been mostly held back by the temporary oversupply mostly due to the stagnant and declining demand among the developed nations. However, over the coming months, oil price should push higher reflecting the changing global demand / supply pattern resulting from some new development in the sector.

Despite a federal ruling to lift offshore drilling ban, the Obama administration filed an immediate appeal along with a “modified moratorium” in the planning. Many analysts still expect the ban could last well beyond the intended 6-month period.

The moratorium has put 33 deepwater rigs out of work and jeopardized shallow water drilling as well. More project delays and production loss would result from the exodus of these rigs, which undoubtedly will get snapped up by the state run oil companies of China, Brazil and India, just to name a few.

Due to the long time span of offshore oil projects, after resources are redeployed elsewhere due to the Gulf moratorium, it could be more than a year — some analysts say as many as three — before they are available to return to the Gulf’s deepwater projects.

Halliburton (HAL), one of the top three oil service providers, estimated a period of 12 to 24 months before returning to 50% of pre-moratorium activity levels. Analysts’ projections of production loss and delay arising from the moratorium range from Wood Mackenzie’s 155,000 barrels a day, or 2.2% of U.S. liquids supply in 2011 to 100,000-300,000 barrels a day in the U.S., and 800,000-900,000 barrels a day globally by 2015, from the International Energy Agency [IEA] Meanwhile, Sanford C. Bernstein believes as much as 500,000 barrels a day from 2013 supply may be cut with a one-year worldwide delay in deepwater drilling. While the moratorium is seen with very little effect near term, and its eventual impact is still unclear, various energy agencies’ forecasts--the U.S. region in particular--may need to be revised with its potentially significant longer-term impact. Cost Push - Oil Spill Regulation Tightening The expected regulation tightening from the BP Macondo well disaster in the Gulf will add to oil project costs with global implication. Offshore drilling costs are already escalating since the Gulf oil spill with the rising environmental, insurance costs and legal risks. Reuters quoted African independent oil and gas company Afren that it had already "experienced a 7-8% increase in costs for a project in Ghana following the safety response of Ghanaian authorities." Indian state oil company ONGC also indicated insurance premium for its onshore assets, which was decided after the BP accident, rose 88% this fiscal year. ONGC expects overall insurance premiums to rise three times higher after the BP Gulf disaster. While the head of French oil major--Total SA (TOT)--warned that tougher rules could push up crude prices $90 a barrel by year end, several analysts also upgraded their oil price targets. MarketWatch quoted a recent Deutsche Bank analysis that any tightening of regulations could boost deepwater exploration and development costs by about 10%, and add $5 a barrel to future oil contracts. Barclays Capital told Bloomberg its latest forecasts of $106 oil in 2012, $137 in the long term, and that oil futures for 2018 at under $100 are “undervalued” as BP Plc’s spill in the GoM will raise the costs and lead to drilling restrictions. Cost Push - Project Costs Bottomed

According to the data released last month by Cambridge Energy Research Associates (IHS CERA), oil and gas upstream project costs are poised to “begin an ascend back to pre-recession levels.” (See Chart)

IHS CERA noted the upward volatility in the underlying sectors that comprise its Upstream Capital Costs Index [UCCI] such as steel , and yard and fabrication. A weaker U.S. dollar and a shortage of skilled labor also played into the rising costs. The index peaked in Q3 2008 after climbing 230% since the base year 2000, and has fallen 13% since the peak.

On the operation side, IHS CERA Upstream Operating Costs Index was up 2% in the 6-month period from Q3 2009 to Q1 2010, pointing to “the upswing in onshore service rates, increased material input prices and escalating manpower costs.”

Since both indexes measure the data before the BP Macondo blowout, the oil spill in the Gulf only adds more uncertainty and impetus to the trend of increasing costs.

Energy consultancy Douglas-Westwood indicated China will be the key driver of global oil demand growth, about half of total. As much as people are worried about a “slowdown” in China, a less than double-digit growth still translates into increasing energy demand. (By the way, Goldman Sachs just “downgraded” the 2010 growth prospect of China to 10.1%.)

Not to make this too lengthy a discussion regarding the Asian energy demand trajectory--particularly from China—and the prospect of peaking “easy” world oil supplies , I will simply refer to the following charts and data from Douglas-Westwood: 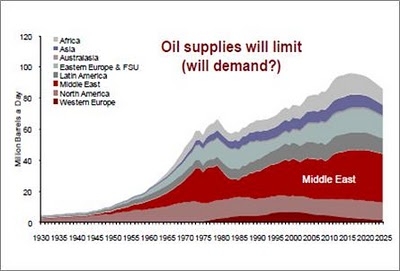 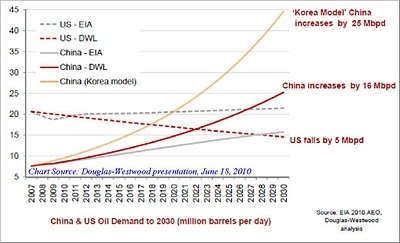 Market Push – Risk On Rest of the Year

Last but not least, the following factors suggest fund managers could be looking to put on the inflation trade (risk on)-- short the dollar and long commodity and equity --probably through the rest of the year.

In fact, for much of the June month, crude oil had resumed its historical inverse relationship with the dollar before the big panic button got triggered. (See Chart) 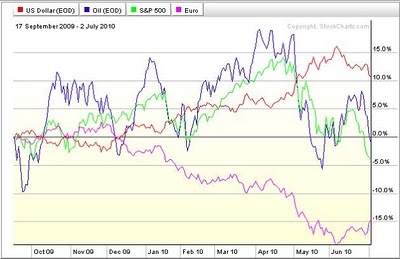 If we take a look around the globe, the long term higher dollar risk should become evident. European governments have taken on massive austerity measures amid concerns about their credit ratings. Meanwhile, China is also implementing various tightening measures amid concerns over inflation and possible asset bubbles.

On the other hand, the U.S. seems more inclined to keep deficit spending to fight off deflation (a misperception, read here) and to stimulate growth.

A weak dollar will translate into higher commodity prices, including crude oil. A break of the dollar index [DXY] below 80 could single-handedly send crude oil soaring to the range of $85 to $90 a barrel. DXY 52-week low now sits at 74.17.
OPEC “Accustomed to” $100 Oil

Even though many have dismissed OPEC's influence on the world energy market; nevertheless, with roughly 40% share of global oil production, what the cartel will or will not do still matters.

In January of this year, several OPEC members including Kuwait and Libya basically told reporters that OPEC will not act as long as oil prices are under $100.

Right now, the main factor that will determine oil prices in 2010 and 2011 is the pace of global oil demand recovery following the Great Recession.

Based on the factors discussed here, barring a world double-dip recession or depression as warned by some economists, we will likely see crude oil reach $85-$90 a barrel by the end of 2010, and $100 by 2011.

Of course, the ongoing geopolitical tension in the oil producing regions of Middle East and Africa will only hasten the arrival of a triple-digit oil price.

EconMatters
37.33K Followers
EconMatters at http://econmatters.com is a syndicated financial content site focusing on global economic and market analysis that matters to investors.