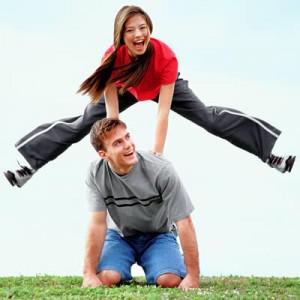 The case study woven in this article is still one that is evolving and has not yet come to its final outcome, although interim outcomes have been realized. It is a story of another variation of a covered option strategy that seeks to transform risk into reward, but does so in a less traditional manner.

While I'm not by nature a risk-taker, and tend to use a covered option strategy to help limit my risk and exposure, I do recognize that there is a corner of most every portfolio that should be reserved for more risky propositions.

The size of that corner depends very much on individual tolerance, but the use of cash covered sales of put contracts can be a nice way to tame risk, even among very risky stocks.

For illustrative purposes, I will use Molycorp (MCP), a fallen angel of momentum investors, and whose direct ownership is not for the faint of heart, having at one time been among the kind of Momentum stocks, a new generation of which are currently under siege.

However, while using Molycorp as an example, the same approach may be used for other stocks that have a volatile trading range, expanded weekly options available for trading and sufficient volume of options trading. All of those criteria are critical before considering to undertake the strategy. Additionally, the stock should have a history of regularly occurring alternating direction price moves during short time frames.

The basic building block of the strategy is the sale of put contracts on a stock that meets the above criteria. The other building blocks are simply more put contract sales at various times dictated by the price moves of the underlying shares.

The sale of a put contract may obligate you to assume ownership of shares, perhaps at a price far above the market value of shares. That is an outcome that should be avoided, if possible. You should be aware of the potential liability associated with the sale of put contracts, especially the worst-case scenario, such as may be encountered if a company declares bankruptcy. The net liability is the difference between your obligated price of purchase and the accumulated premiums received. You should, therefore, not consider the use of this strategy for any stock that appears to be in a death spiral with little to no chance for some price stability nor recovery to your initial entry point.

As with most everything, you have to start somewhere, and in this case, the strategy is initiated with the sale of put contracts. Ideally, I like to sell those initial contracts using slightly in-the-money put contracts. Doing so enhances the option premium received due to the intrinsic value component of the premium.

The goals for that initial block may be to see the contracts expire or get rolled over to a new contract expiration date. Rolling over is a two-part trade that is best undertaken as a spread, rather than as individually executed trades. In such a spread, you concurrently buy back the contracts (Buy to Close, or "BTC") you sold, and then sell new contracts (Sell to Open, or "STO") for some future date. The absolute prices of the individual legs of the transaction are not important, but the difference between the purchase and sales price should be a "net credit" to your account.

As a pragmatic issue, when there are large gaps between the bid and ask prices on either or both legs of the transaction, it may be helpful to begin the process of entering a proposed "net credit" by employing the following calculation for your starting point.

The figure can then be adjusted by a small increment to test the market, keeping in mind that you don't want a disagreement over a penny or two prevent you from making the trade.

Subsequently, the new contracts expired as shares closed above the $5 strike. The net premiums obtained through the sale of contracts represented realized profits. 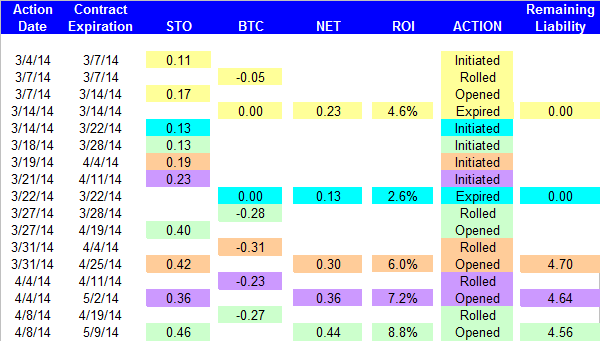 However, on that same day, a new branch was added through the sale of put contracts expiring on March 22, 2014. Those contracts simply expired, but not before adding two new branches on March 18 and March 19 utilizing expiration dates one and two weeks after the expiration of the initial branch of this sequence.

At that point, there were three concurrent option contracts outstanding, with their expiration dates representing three successive weeks. These form the basis for the "leap frog" rollovers that may be undertaken if the share price moves in an adverse direction that may otherwise result in assignment. At the point that the expiration of the March 22, 2014 contract was an essentially foregone conclusion, a fourth branch was added on the expiration date to take its place in order to maintain a trio of contracts.

In the above sequence of put sales, the net premiums currently total $1.42. Assuming the continued maintenance of three lots of contracts that represents an ROI of 9.7% over a period of 10 weeks, based on the most distant contract now open.

There is no limitation on the number of concurrent weeks represented by the put contracts, but the potential liability of the positions should be consistent with your overall tolerance for risk and the pre-determined size of that specific corner of your portfolio, remembering that in a worst-case scenario, such as the company's bankruptcy, your net liability is the strike level less any premiums received.

The utility of leapfrogging, that is rolling over the first in the series of option contracts to a date after that of the last in the series, is that it delays or possibly averts assignment by increasing the length of time until expiration. For stocks not in a "death spiral" but simply undergoing periodic price adjustments, time can be your best friend. While doing so, it also generates a net credit in option premiums, and results in the discovery that getting paid to wait can be appealing.

Visually, the leapfrogging that is illustrated in this case study can be seen in the "STO" column when focusing on the color coding used to identify the origin of existing put contracts.

Ideally, the rollover would be performed as close to expiration as possible, so as to minimize the added expense of buying back the time value remaining on contracts. However, it is far more important to seize on the opportunity to complete the transaction as price movements may make them available. The most favorable time to roll over a contract that is in-the-money is at the time of a price surge. It's, therefore, important to stay on top of prices and not get caught by extreme moves in either direction. A sudden price spike that takes shares well above the strike price, even with time remaining on a contract, may still warrant closing out the position and taking profits, and then simply awaiting the next price drop and opportunity to initiate a new position.

Similarly, a sudden price drop well below the strike may offer the indication to roll over the position to a more distant date to buy time.

The contract most imminently due to expire is rolled over to a date that follows that of the last in the series, and so on and on until the chain is broken by expiration.

When expiration does occur as share price exceeds that of the strike price, the process can begin anew at the point that shares once again fall to approach or go below the selected strike price, which should be consistent among the various branches.

As an added bonus, while I don't generally like to use margin accounts for anything other than to avoid "free riding violations," the use of cash secured puts in a margin account only incurs margin fees if the position is assigned and you are forced to take possession of shares. Since the goal of this strategy is to avoid assignment, the use of a margin account allows you to leverage your assets, but with somewhat less risk than when using a margin account in the more traditional and intended manner.

While this variant of a covered option strategy may require some high maintenance and frequent oversight, it can offer a very attractive return, with each week of maintaining the contracts significantly reducing the net liability in the event of extreme adverse price movement.

Disclosure: I am short MCP. I wrote this article myself, and it expresses my own opinions. I am not receiving compensation for it (other than from Seeking Alpha). I have no business relationship with any company whose stock is mentioned in this article.