While the price of gold and silver have dropped 4% and 18%, respectively, from this time last year, shares of McEwen Mining (NYSE:MUX) have risen more than 6% over the same time period. And against the Global X Silver Miners ETF (SIL) and the Junior Gold Miners ETF (GDXJ), MUX's performance is even better still, with both ETFs down 20% and 34% since last year, respectively. 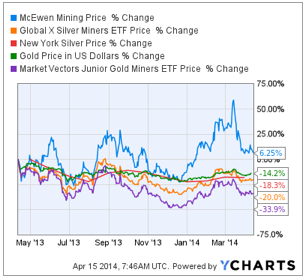 Speaking at the Prospectors & Developers Association of Canada (PDAC) 2014 in early March, McEwen chairman Rob McEwen said the company's stock performance against the backdrop of Wall Street's nearly-obscure discussion of MUX has been "extraordinary," noting that only one analyst at Stifel Nicolaus covers the stock, rating it a "buy" in addition to a target price of $4.33, or an implied 81% move higher in the stock price from today's $2.38.

Moreover, the last time a journalist/analyst published an article on MUX was Nov. 11, where the author presented a well-written article about MUX's mining properties.

MUX's assets include the San Jose mine in Argentina (49% stake), the El Gallo 1 and El Gallo 2 mines in Mexico, the Gold Bar in Nevada, the Tonkin in Nevada, and the Los Azules in Argentina.

From the chart below, note the ever-increasing rise in silver production. With the slight drop in 2011, gold production has recovered and continues to rise. All else being equal, with the addition of the ramped production expected from El Gallo 1 in 2015, MUX could top 200,000 gold equivalent ounces during 2015. 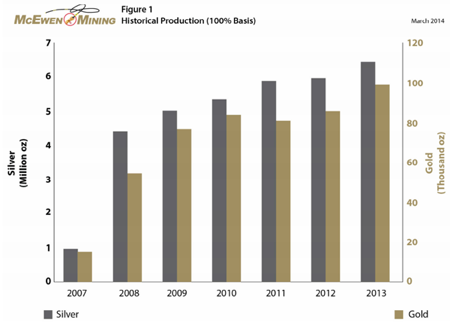 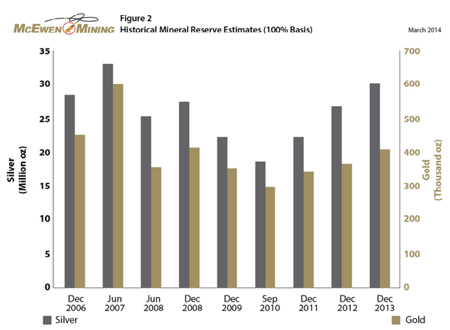 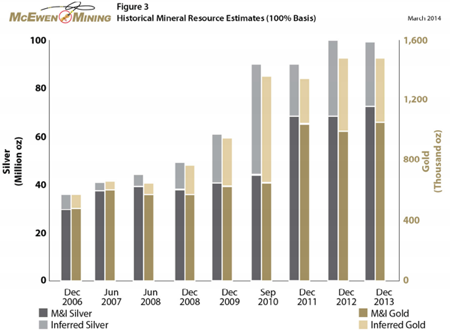 As precious metals prices begin to rise again (our opinion), MUX is poised to capitalize on the restart of the bull market we see beginning in the fall.

The big draw for investors, besides the company's reputation for meeting deadlines, raising production quotas and ore grades, is MUX's clean balance sheet. The company has no debt and approximately $46 million of cash/near cash on the books to cover an operation that reported approximately as much revenue for fiscal 2013.

Additionally, the founder of MUX, Rob McEwen, was also founder of GoldCorp (GG), a tiny junior at one time, but now a major producer, with a capitalization of nearly $20B. GG has grown in capitalization by an astounding 31% CAGR.

Going forward, investors should realize that MUX makes money at a gold price of between approximately $1,400 and $1,450 per ounce, of which is not an unreasonable target price by the close of 2014.

We believe MUX is a superior junior mining company due to its management, history of increased production, increased replacement and total reserves, as well as continued exploration in areas most familiar to McEwen from his days at Goldcorp (see last page of MUX media document).

The company's very attractive balance sheet also suggest to us that, as the price of precious metals rise, MUX will be poised to capitalize on much higher bullion prices as well as production rates in 2015. What's left for the company to do is to primarily continue building out El Gallo 1 and El Gallo 2, and wait for higher metals prices.

Investors familiar with MUX already have witnessed the company's shares outperform its peers during the last 12 months. We suspect that, as the bull market in precious metals resumes, MUX will come under more scrutiny by Wall Street, SA journalists and others. We expect that these added eyes will conclude as we have that MUX is a potential big moneymaker in coming years and will likely trade at a richer premium from today's 0.98 Price/Book.

The company's stock performance may again stand out as the big-mover of the sector as it has in the recent past, and should draw in the slew of momentum-style hedge fund managers who jump from one "hot" sector to the next. These same managers are suspected to be behind much of the exaggerated move in biotech stocks during 2013. We believe a rotation out of last year's winners will move into what we suspect will be this year's winners - mining stocks. MUX stands to gain more investment capital than its peers during the rotation into mining companies - a rotation that appears to be well underway.

Disclosure: I have no positions in any stocks mentioned, but may initiate a long position in MUX, SVLC over the next 72 hours. I wrote this article myself, and it expresses my own opinions. I am not receiving compensation for it (other than from Seeking Alpha). I have no business relationship with any company whose stock is mentioned in this article.

Jason Bond
1.26K Followers
Jason Bond is an American stock trader, entrepreneur, and small cap expert. Jason teaches small cap swing trading at Jason Bond Picks. He is best known for his 2013 swing trading performance tripling the S&P 500 in the portfolio he manages. Jason’s small cap swing trading ideas are widely published on numerous financial sites and blogs. Prior to teaching small cap swing trading in 2011, Jason taught for the Webster Central School District in NYS from 2001 - 2011. Jason’s trading strategy attempts to capture gains in a stock within one to four days. He uses technical analysis to look for stocks with short-term price momentum. Jason is interested in the fundamental value of stocks but puts emphasis on price trends and patterns.
Follow
24 Comments