I work at the crossroads of design, engineering and research, and have used 3D printing (formerly known as rapid prototyping, which is what it really is) for the better part of two decades. I read the Wohlers Report and attended the Euromold. Therefore, I am neither "against" 3D printing in general nor "against" equipment vendors in particular. However, what most uninformed futurologists so conveniently ignore is that the intersection of creation, production and consumption is far more complex than it is made out to be, and that it is by no means clear where and by whom substantial and sustainable value will be created.

This article is the second of a three-part mini-series, debunking the most common mythologies surrounding additive fabrication. The first article addressed Consumers, the last articles will address Technologies.

Journalists of quality magazines and newspapers, as well as analysts of well-known investment banks, have jumped onto the additive fabrication bandwagon, claiming that 3D printing will revolutionise production of goods, with 3D Systems (DDD), Stratasys (SSYS) and ExOne (XONE) eventually putting a "factory in everybody's home", like an inkjet printer. If true, that would mean that products as diverse as corduroy trousers, hospital beds, storage shelves, lawn mowers, TV-sets, cosmetics bottles, etc. would eventually jump off the build-plate of 3D printers small and large at an economy of scale that would have to be more effective than what can be achieved by the multitudinous production processes available today, themselves also advancing at a rapid pace, which is conveniently overlooked.

A side-robot injection moulding machine from Kuka AG (OTC:KUKAY) or Sumitomo can produce an entire performance-plastics car bumper, including metal in-mould-decoration, with perfect surface finish in only 42 seconds, a part that would take many days to produce on a large Voxeljet (VJET) machine (at far inferior quality). The parts for a Buzz Lightyear toy figurine, the token example from the first article, could be injection moulded at Chinese Miriat Products (HK) Co. Ltd in seconds, an entire set of parts per tool in a single shot, perfectly finished, coloured and ready to be snapped together; from only 5.000 to up to a massive 1.000.000 of them per month, starting from as low as US $0.68-1.28 (quantity FOB price). With rapid tooling, in part advanced by additive manufacturing (laser sintered with an ultra-fast EOS or envisionTEC machine, for example), small batch production of 100 off is already a reality.

That said, let's now debunk the "revolution of production" in more detail, taking some of the most warped storytelling of a typical cheerleader article (TechRepublic) to the acid test:

I suspect that many believers in 3D Systems acquired the stock, and later any stock remotely associated with additive fabrication (Organovo comes to mind), after The Motley Fool injected its "Dear China, its over… the little shop that's putting China out of business" campaign in retail investors' minds from April 2012 onwards. Remember the Segway and how it would change personal inner city transport forever?

Last, but not least, investors should carefully watch Gartner's Emergent Technology Hype Cycle Curve to see what lies ahead of them, when investing in science fiction: Please beware of the Peak of Inflated Expectations and the Trough of Disillusionment. Many fields of business got trapped right there, to never fully emerge. 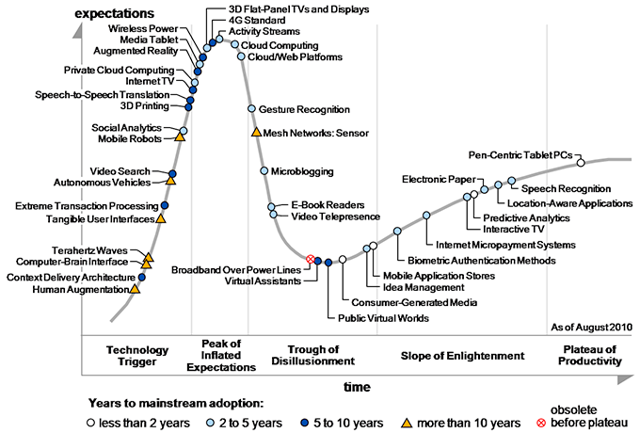 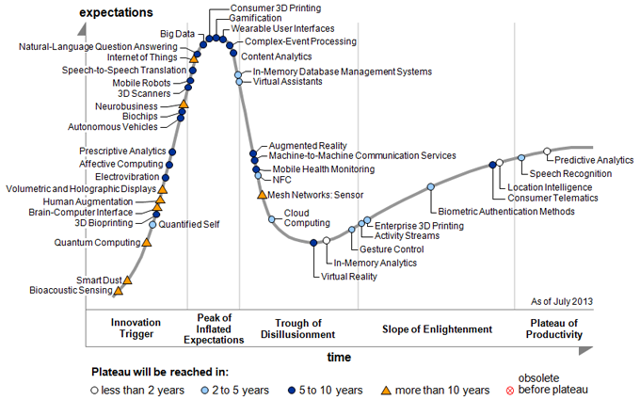 Andreas Hopf
2.02K Followers
I work on the crossroads of design, branding, consumer research and product development. Occasionally, I buy shares of companies, whose industry I understand or work in. However, I take capitalism and its machinations with the necessary spoonful of quality Swedish stone salt.
Follow
108 Comments