On April 25, 2014, (NYSE:GBR) rocketed more than 50 percent on unusual volume due solely to a meaningless stock promotion. After the open, StockMister.com sent out promotional emails touting GBR as a buy because the company is earning millions in revenues and reporting a positive EPS. However, basic research suggests the only reason Stock Mister chose to promote GBR was that it is a low-float, microcap stock. GBR's latest 10-K shows the company has had a consistent operating-earnings loss over the past three years and that the only reason the company showed a net income the past two years was a "bad debt expense." We strongly encourage investors to sell GBR and not to invest in stocks for which they receive "hot tips." We hereby assign a SELL rating on the stock with a price target of $2.

New Concept Energy is an oil and gas company that seeks to capitalize on unconventional reservoirs containing coalbed methane and gas shale. These gas accumulations are regionally pervasive and independent of structural and stereographic traps. This is a competitive advantage over traditional oil and gas companies because it provides the potential for development of extremely large and productive acreage positions.

After the open, we received an email from StockMister.com promoting GBR. Stock Mister is a penny-stock promoter that is in the business of being paid to promote illiquid stocks. This is done for the purpose of inducing novice investors to purchase shares so large shareholders can sell their stock. Promoters thrive on the short-term performances of their stock picks to entice investors to purchase their next pump-and-dump. Stock Mister is notorious for pumping low-float stocks, for which they were not compensated, because the lack of supply and large demand within a short time period causes the stock to rise beyond normal levels. Therefore, the rise in the stock price is unwarranted and, over the next several days or weeks, is likely to fall back to where it came from. Here is a copy of the text within the email that we received: 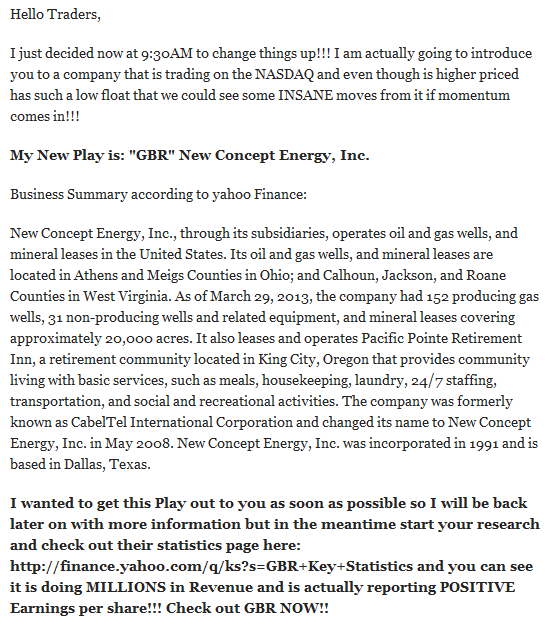 On average, StockMister's promotions plummeted by 78 percent from promotional highs

Below is a table created by taking all of StockMister's uncompensated promotions going back to March 2014. After gathering prices before, during and after each promotion, we found that on average, the promoted stocks fell by 78 percent from their highs. We also found that eventually, the stocks tend to fall back to around the levels they were at before the promotion. Therefore, we conclude GBR is likely to fall back to around $2 in the coming weeks.

StockMister claims GBR is a buy because GBR is doing millions in revenue and is actually reporting positive EPS. However, when looking through the most recent 10-K, we find that over the past three years, GBR has had a consistent operating-earnings loss and that the only reason the company showed a net income over the past two years was from a "bad debt expense." It is our belief that the only reason Stock Mister chose to promote GBR was that it is a low-float, microcap stock. 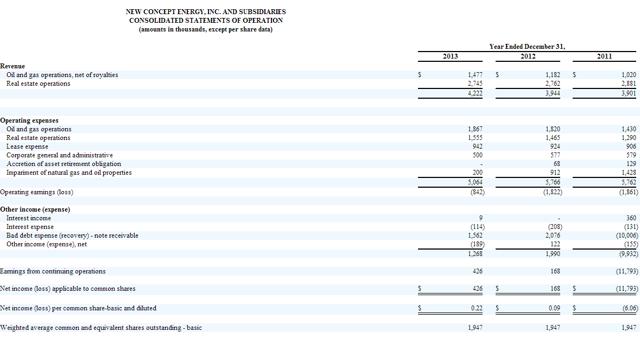 Stock Mister makes money by taking advantage of naive investors. Therefore, we strongly recommend that you don't follow StockMister.com or any other email promotion that you receive. We have contacted the company and were told they are unaware of any stock promotion and were referenced to its statement on Friday on unusual activity. We recommend that investors sell GBR into this unwarranted rise in price, and we assign a SELL rating on the stock with a price target of $2.

Disclosure: I am short GBR. I wrote this article myself, and it expresses my own opinions. I am not receiving compensation for it. I have no business relationship with any company whose stock is mentioned in this article.

3D Analytics
659 Followers
We are a research group that consults hedge fund and high-net worth clients. We specialized in identifying special opportunities from both the long and short side. The writer for 3D Analytics has professional traded for hedge funds for 10+ years and specializes in 1) finding hidden, unrecognized value, 2) shorting overvalued stocks, and 3) arbitrage situations. The articles are written solely by him, but has a group that assist him in finding opportunities, basic research, and editing.
Follow
3 Comments