When investors allocate to foreign stocks, they typically assume a secondary currency exposure on top of their local equity market returns. This secondary currency exposure-or "currency bet"-can increase returns during periods when the euro, yen, British pound and other foreign currencies are rising versus the dollar. But it can also decrease returns when those foreign currencies are falling in value. If investors do not have strong conviction in the potential direction of the euro, yen or British pound, WisdomTree argues they should hedge at least a portion of their exposure to these currencies.

Moreover, WisdomTree believes we may be entering a period when the U.S. dollar increases in value in a secular trend. This view is based on changes unfolding in central bank policies, as well as likely changes in interest rate policies developing between Europe, Japan and the United States. This does not mean one should allocate less to foreign stocks if the dollar is rising-in fact this could have the potential to be the best time to own foreign stocks, as illustrated in Japan in 2013.

WisdomTree pioneered developing currency-hedged Indexes for use within the exchange-traded fund (ETF) structure as the first ETF firm to launch a currency-hedged ETF. WisdomTree continues to innovate along this theme with the introduction of the WisdomTree International Hedged Dividend Growth Fund (IHDG), which tracks the performance of the WisdomTree International Hedged Dividend Growth Index after costs, fees and expenses. Before describing the characteristics of this new Index that IHDG is designed to track, it is important to establish why WisdomTree thinks currency hedging is increasingly critical to obtaining international investments exposure, particularly in the developed world.

For instance, if the Federal Funds Rate increases to 2% and the ECB and the BOJ both keep rates pegged near 0%, the U.S. investor could receive approximately 2% income to hedge the euro and yen risk. If this scenario materializes, it could have the potential to be a game-shifting catalyst for investors to transition to currency-hedged ETFs for their developed world exposures. In this scenario, one can argue it would be expensive to have euro and yen exposures like traditional foreign equity ETFs that do not hedge the currency risk-missing out on a potential 2% income or differential in interest rates from hedging the currency as well as the removal of a potential source of additional risk.

WisdomTree believes there are common myths about hedging foreign currencies and I plan to address the three main misconceptions in a series of three blog posts. The first myth is that it is expensive to hedge foreign currencies, followed by the myth that the euro and yen can be beneficial for the purchasing power of the U.S. dollar, and finally the myth that currencies are a wash in the long run, so one should default to taking the currency risk.

Myth #1: It Is Expensive to Hedge Foreign Currencies

The Brazilian Central Bank hiked rates to 11%, while India hiked its repurchase rate three times since its new central bank governor, Raghuram Rajan, took office on September 4, 2013. The repurchase rate in India is at 8% as of March 31, 2014. These are high hurdle rates for the currencies to depreciate against the U.S. dollar before a hedging investor has the potential to break even from the cost of the hedge.

However, the euro, yen and British pound-which combine to represent almost three-quarters of the weight of the MSCI EAFE Index (a widely followed developed country international equity market benchmark)-each have a cost to hedge that is very low. Specifically, this cost is approximately zero in the case of the euro and yen, and approximately 30 basis points for the British pound.

This is one reason why WisdomTree believes one may want to have a high conviction in the euro, yen and British pound's direction to fully take on this currency risk in a traditional ETF that does not hedge the currency.

Illustrating the Difference Between High- and Low-Cost Currency Hedging 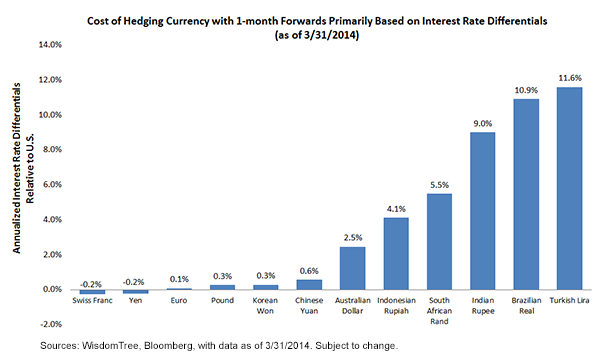 The bottom line is that WisdomTree ultimately believes currency hedging is gaining prominence and importance-as was particularly evident with Japan in 2013. But Japan is not a unique application. WisdomTree believes that currency-hedged strategies should have broad appeal, in Europe today based on monetary policy directions of the ECB, but also more strategically from a long-term standpoint in broader-based developed world exposures.

There are risks associated with investing, including possible loss of principal. Foreign investing involves special risks, such as risk of loss from currency fluctuation or political or economic uncertainty. The Fund focuses its investments in specific regions or countries, thereby increasing the impact of events and developments associated with the region or country, which can adversely affect performance. Dividends are not guaranteed, and a company's future ability to pay dividends may be limited. A company currently paying dividends may cease paying dividends at any time. Investments in currency involve additional special risks, such as credit risk and interest rate fluctuations. Derivative investments can be volatile, and these investments may be less liquid than other securities, and more sensitive to the effect of varied economic conditions. As this Fund can have a high concentration in some issuers, the Fund can be adversely impacted by changes affecting those issuers. The Fund invests in the securities included in, or representative of, its Index regardless of their investment merit and the Fund does not attempt to outperform its Index or take defensive positions in declining markets. Due to the investment strategy of this Fund, it may make higher capital gain distributions than other ETFs. Please see the Fund's prospectus for specific details regarding the Fund's risk profile. 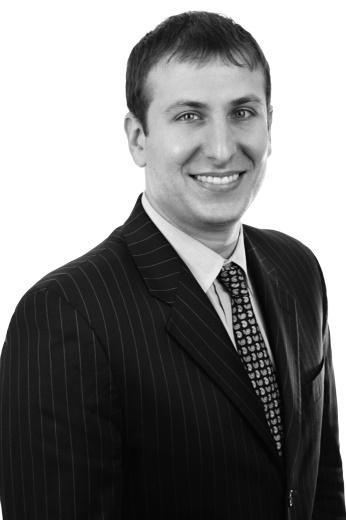 As WisdomTree's Director of Research, Jeremy Schwartz offers timely ideas and timeless wisdom on a bi-monthly basis. Prior to joining WisdomTree, Jeremy was Professor Jeremy Siegel's head research assistant and helped with the research and writing of Stocks for the Long Run and The Future for Investors. He is also the co-author of the Financial Analysts Journal paper "What Happened to the Original Stocks in the S&P 500?" and the Wall Street Journal article "The Great American Bond Bubble."

WisdomTree
4.72K Followers
WisdomTree launched its first ETFs in June of 2006, and is currently the industry's fifth largest ETF provider. The WisdomTree Seeking Alpha profile will feature content by some of our leading analysts including: Luciano Siracusano: Luciano Siracusano is WisdomTree's Chief Investment Strategist and Head of Sales. He is the co-creator with CEO Jonathan Steinberg of WisdomTree's patented Indexing methodology and has led the firm's sales force since 2008. Luciano is a regular guest on CNBC and FOX Business, and speaks frequently on ETFs, indexing and global financial markets. A former equity analyst at ValueLine, Luciano began his career as a speechwriter for former New York Governor Mario Cuomo and HUD Secretary Henry Cisneros. He graduated from Columbia University with a B.A. in Political Science in 1987. Jeremy Schwartz: As WisdomTree’s Director of Research, Jeremy Schwartz offers timely ideas and timeless wisdom on a bi-monthly basis. Prior to joining WisdomTree, Jeremy was Professor Jeremy Siegel's head research assistant and helped with the research and writing of Stocks for the Long Run and The Future for Investors. He is also the co-author of the Financial Analysts Journal paper “What Happened to the Original Stocks in the S&P 500?” and the Wall Street Journal article “The Great American Bond Bubble.” Christopher Gannatti: Christopher Gannatti began at WisdomTree as a Research Analyst in December 2010, working directly with Jeremy Schwartz, CFA®, Director of Research. He is involved in creating and communicating WisdomTree’s thoughts on the markets, as well as analyzing existing strategies and developing new approaches. Christopher came to WisdomTree from Lord Abbett, where he worked for four and a half years as a Regional Consultant. Rick Harper: Rick Harper serves as the Head of Fixed Income and Currency for WisdomTree Asset Management, where he oversees fixed income and currency products developed through our collaborations with the BNY Mellon Corporation and Western Asset Management. Rick has over 19 years investment experience in strategy and portfolio management positions at prominent investment firms. Prior to joining WisdomTree in 2007, Rick held senior level strategist roles with RBC Dain Rauscher, Bank One Capital Markets, ETF Advisors, and Nuveen Investments. Bradley Krom: Bradley Krom joined WisdomTree as a member of the Fixed Income and Currency team in December 2010. He is involved in creating and communicating WisdomTree’s thoughts on currency and fixed income markets, as well as analyzing existing and new fund strategies. Prior to joining WisdomTree, Bradley served as a senior trader on a proprietary trading desk at TransMarket Group. Tripp Zimmerman, Research Analyst Tripp Zimmerman began at WisdomTree as a Research Analyst in February 2013. He is involved in creating and communicating WisdomTree’s thoughts on the markets, as well as analyzing existing strategies and developing new approaches. Prior to joining WisdomTree, Tripp worked for TD Ameritrade as a fixed income specialist. Tripp also worked for Wells Fargo Advisors, TIAA-CREF and Evergreen Investments in various investment related roles. Tripp graduated from The University of North Carolina at Chapel Hill with a dual degree in Economics and Philosophy. Tripp is a holder of the Chartered Financial Analyst designation. Jonathan Steinberg, CEO Prior to establishing WisdomTree, Jonathan founded, and served as Chairman and CEO of Individual Investor Group, Inc. From 1998 to 2004, he held the role of Editor-in-Chief of Individual Investor and Ticker magazines. Before his entrepreneurial accomplishments, Jonathan was an Analyst in the Mergers & Acquisitions division at Bear Stearns & Co. He attended The Wharton School at the University of Pennsylvania and is the author of Midas Investing, published by Random House in 1996. Zach Hascoe, Capital Markets Zach Hascoe began at WisdomTree in August 2010, and works directly with David Abner, Head of Capital Markets. The Capital Markets group is involved in all aspects of the WisdomTree ETFs including product development, helping to seed and bring new products to market, as well as trading strategies and best execution strategies for the client base. Zach works closely with the trading and liquidity community and does analytics on ETF baskets and the capital markets. He is a frequent contributor to the WisdomTree blog on topics related to the capital markets, liquidity, structure and best execution. In addition, he manages the hedge fund relationships for the firm. Zach received a B.A. from Bucknell University and was Captain of the Bucknell Tennis Team.