A version of this article was published in the March 2014 issue of Morningstar ETFInvestor. Download a complimentary copy of ETFInvestor here.

PowerShares Buyback Achievers (NASDAQ:PKW) has done well over the past few years, attracting gobs of new money. The fund employs a deceptively simple strategy: Each year it buys stock of firms that have reduced their shares outstanding by at least 5% over the trailing 12 months. Until late last year, PKW's index bought firms that have repurchased at least 5% of their shares, even if the firm issued enough new shares to sop up the buyback and more. The new strategy is a clear improvement.

Many investors and corporate managers believe repurchases lift share prices by boosting earnings per share--they're "accretive" to earnings, in the turgid parlance of business. The idea is that after a buyback the company's cash flows remain unchanged but are then divided among fewer shares, making each share more valuable. It may very well be that this effect is a self-fulfilling prophecy. However, theory indicates that whether a repurchase boosts earnings per share has no bearing on whether the repurchase actually adds value. The only time buybacks make sense is when a company's shares are trading at below intrinsic value and managers have no better opportunities to invest in.

Of course, the world doesn't work like this. Buybacks usually are greeted with applause by the markets, for good reason. Studies indicate the market assigns less than $1 of value for each $1 of excess cash a company holds, likely because investors think managers tend to destroy value by empire-building. Buybacks (and dividends) signal to the market excess cash on hand as well as future cash flows will be returned to shareholders if high-enough returning investments can't be found.

OK, but this story doesn't explain why companies that repurchase shares go on to experience years of outperformance--shouldn't the market quickly price in the information revealed by the share buyback?

There are lots of theories as to why this is the case, few of them persuasive. I think it's simple: Companies that cannibalize themselves tend to be more profitable and less leveraged. They have moats. Investors seem to underreact to the information revealing long-run profitability.

To test this hypothesis, I regressed of PKW's monthly excess returns against market (MKT), size (SMB), value (HML), momentum (UMD), and quality (QMJ) factors, using data covering December-end 2007 to December-end 2012. I obtained the first four factors from the French Data Library and the quality factor from Andrea Frazzini's Data Library. Unfortunately, the quality factor only goes up to December 2012, hence the truncated period covered. (I wrote a primer on factor models.)

The regression reveals a decent quality bias and a modest tilt to small-cap and value stocks. Over the period examined, a 1% change in QMJ was associated with a 0.26% change in the same direction in PKW's monthly return. 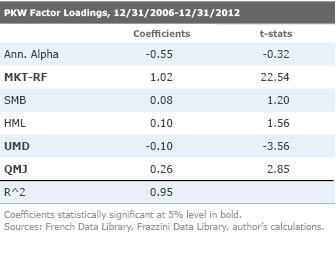 There's no statistically significant outperformance after controlling for PKW's factor exposures. One can replicate PKW's performance by using some combination of funds or stocks that give similar factor exposures. PKW's 0.71% expense ratio is rich. Its main claim to fame is its heavy quality exposure, which one can obtain elsewhere more cheaply.

My favorite pure quality exposure is iShares MSCI USA Quality Factor (QUAL), which charges a mere 0.15%. Incidentally, its historical exposure to quality is close to PKW's. This is not to say they're good substitutes. PKW outstripped QUAL since the latter's mid-2013 inception. This can be partly attributed to PKW's bias to smaller, higher-beta stocks, which have done exceptionally well.

A philosophical competitor to PKW is Cambria Shareholder Yield (SYLD), which charges 0.59%. SYLD looks for stocks scoring highly on a more holistic measure of cash return: dividends plus net share buybacks plus net debt reduction. It equal-weights 100 stocks. SYLD's strategy combines quality and value, so it's not as pure of a quality bet. Furthermore, SYLD can and does own micro-cap stocks, and owns mostly small- and mid-cap stocks, so it behaves much like a small-cap fund. Whether the small-cap focus is a good thing depends on how you view the trade-off between higher transaction costs and the potential to exploit a less efficient segment of the market.