With the downward revision of second quarter real GDP growth from a 2.4% growth rate reported in the advance report to 1.6% reported in the first revision, real GDP in the first year of recovery now appears to be 3%. As was originally reported, this is still stronger than the first year of recovery in the two jobless recoveries of 1991 and 2001. But compared to previous recoveries and the depth of the recession, this still looks like an extremely weak recovery. 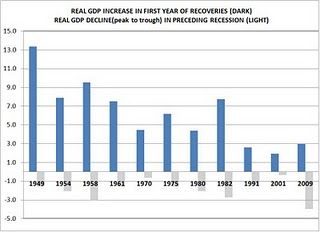 The major revision was in the trade sector that was reported here when the June trade data was released. Real imports rose at a 32.4% annual rate while real exports jumped at a 9.1% annual rate. As a consequence, while real gross domestic purchases grew at a 4.9% rate, an improvement from the 3.9% rate in the first quarter, real final sales of domestic product only grew at a 1.0% rate versus a 1.1% in the first quarter.

Probably the main reason real GDP growth was stronger than most expected was the strength of government which grew at a 9.1% rate versus a 1.8% rate in the first quarter. This surge was driven by defense spending that rose at a 7.3% rate. Defense procurement is always highly volatile and does not imply anything for future growth.

While those forecasting a double dip will see this report to be supporting their forecast, it looks to me like an argument against a double dip. The main area of weakness was trade, not domestic demand and there is little reason to expect domestic final demand to swing from a 4.9% growth rate to an actual decline, even if it does slow. But import growth is almost certain to slow from the explosive growth in the second quarter, so trade is unlikely to be such a significant negative in the second half. While a swing to negative real GDP growth in the second half is unlikely, continued sub-par growth remains the most likely scenario.

But in an environment of sub-par growth, the economy does not have the momentum to absorb a negative shock.

Follow The Angry Bear and get email alerts
+
Add a comment
Disagree with this article? Submit your own.
To report a factual error in this article, click here.
Your feedback matters to us!