NYSE has reported monthly data on securities market credit in three discrete series (Margin Debt, Free Credit Cash Accounts and Credit Balances in Margin Accounts) since 2003 and on margin debt itself since 1959. NYSE margin debt is the aggregated dollar value of issues bought on margin (i.e., borrowed money) across the exchange. Many equity-market participants consider it a gauge of speculation in the stock market. The U.S. Federal Reserve currently has the initial margin requirement set at 50 percent.

There is a strong positive correlation between NYSE margin debt and SPY, so it is unsurprising excellent coincident or leading indicators of long-term movements in the exchange-traded fund based on the S&P 500 have been built employing NYSE data on securities market credit in general and margin debt in particular.

My own analyses of the relevant NYSE data series historically have focused on two main metrics, the Margin Debt Directional Indicator, or MDDI, and the Securities Market Credit Risk Rank, or SMC Risk Rank, as described in "NYSE Margin Debt As An Indicator Of Long-Term Movements In S&P 500." 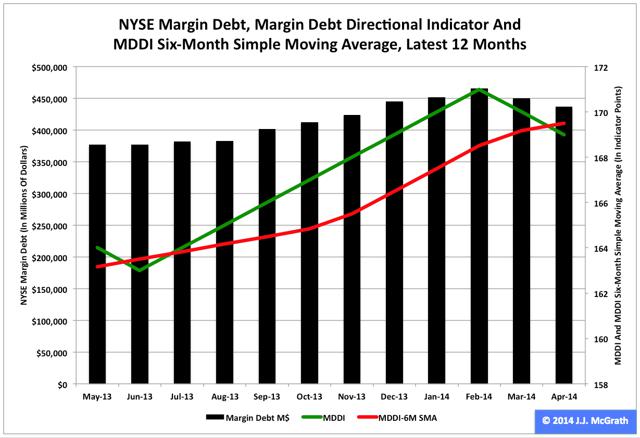 Source: This chart is based on a proprietary analysis of monthly margin-debt data at NYSE's online site.

The MDDI centers on a comparative assessment of NYSE margin debt in the two most recent months of the data series that began in January 1959.

The MDDI's April value is 169, which is lower than both its March value of 170 and its six-month SMA of 169.50, so I consider the market to have switched modes as of April 30. My bias has been reinforced by other data, with one series discussed in "SPDR S&P 500 ETF Coppock Guide: Nonbullish as of May Day 2014."

Of course, there is a possibility of whipsawing, which happened as recently as May, June and July of last year.

Source: This table is based on proprietary analyses of monthly securities-market-credit data at NYSE's online site.

April is No. 53 among all 135 months evaluated since the January 2003 baseline by my SMC Risk Rank methodology, which carries out a comparative assessment of the data NYSE has reported in three discrete series: Margin Debt, Free Credit Cash Accounts and Credit Balances in Margin Accounts.

The dynamic SMC Risk Rank is designed as a measure of equity-market risk associated with speculation, ranking each month in the data set on an ongoing basis. Despite a certain amount of derisking during the past two months, December 2013 is No. 1 and February 2014 is No. 2 among all months ranked (Figure 2). 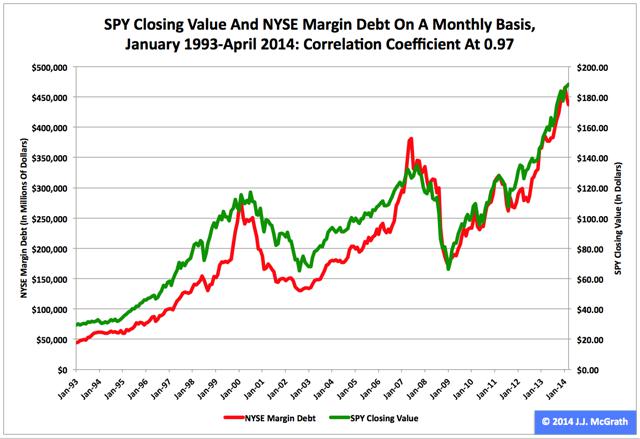 Source: This chart is based on monthly margin-debt data at NYSE's online site and adjusted monthly SPY data at Yahoo Finance.

Documenting the strong positive correlation between NYSE margin debt and SPY, I calculate the coefficient between them as 0.97 from January 1993 to April 2014 (Figure 3). Therefore, I anticipate this relationship may reassert itself soon, especially given the ETF's seasonal tendencies described in "SPY Seasonality: Share Price Cools Down While U.S. Air Temperature Heats Up" and the U.S. Federal Open Market Committee's actual and projected cuts in its current quantitative-easing program.