Burger King Holdings Inc. (BKC), the world’s second-largest hamburger chain after McDonald's Corp. (MCD), announced that it is being acquired by a private investment firm 3G Capital for $24 per share, or $4.0 billion, including the debt of the company. 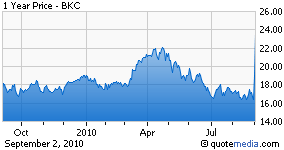 The offer price is at a 46% premium to the share price before the speculation of buyout talks in the market on Wednesday. The transaction is expected to close in the fourth quarter of 2010.

As per the agreement, Burger King's Chairman and CEO John Chidsey will become co-chairman of the board in the new company, and 3G Capital’s Managing Partner Alex Behring will be the other co-chairman.

However, the completion of the deal is subject to regulatory as well as shareholders’ approvals and other customary closing conditions. Moreover, there will be a 40-day period where Burger King can consider if it gets any lucrative offer from any third party, running through October 12, 2010. Possibility of a higher bid seems negligible though, and completion of the deal is likely.

We believe with 90% of restaurants franchised, Burger King is well positioned to sustain growth through new product introductions, an upgraded prototype design and expanded restaurant hours. Moreover, the company’s overseas expansion remains one of the key growth drivers.

Thus, based on the challenges being faced by the company, we consider the takeout price of $24 to be attractive for shareholders. We have a Zacks Rank of #4 (short-term Sell recommendation). We also reiterate our long-term Neutral rating.

Zacks Investment Research
6.69K Followers
Zacks.com brings the decades of study and stock picking expertise of Zacks Investment Research to individual investors. Now, you don't to be an investment bank or brokerage firm to get the professional power of Zacks' research. It's all available on Zacks.com. Learn more about Zacks' history and company below.