After experiencing a 33% share price decline since May 19, 2014, LAS Chairman Hetong Guo and CEO Jing Yang, on May 27, 2014, announced their intention to buy up to $1 million of LAS shares over the next year in the open market. What Chairman Guo failed to tell investors is that in 2013, he had secretly pledged his assets, including his existing ownership interest in LAS, as collateral for undisclosed debt totaling RMB 250 million issued by a related PRC entity under his control. Chairman Guo and CEO Yang also failed to tell investors that the related party's debt was further secured by the revenues of LAS.

Based on our research, LAS appears to be joining a growing list of ChinaHybrid companies that are not properly disclosing all of their material Chinese business dealings in their U.S. SEC filings. LAS is potentially facing a similar scenario to that of FAB Universal (FU), which we reported on November 18, 2013 had completed a $16.4 million bond offering in China that was not disclosed in its SEC filings. Following our report, the NYSE halted trading in FU shares and issued a delisting determination.

Our research uncovered evidence that Lentuo Electromechanical, a related party entity that owns LAS's variable interest operating entities ("VIEs") in China, issued RMB 250 million ($41 million) of debt in 2013 through two trusts made up of Chinese investors. We confirmed our findings through phone conversations with the management companies of the two trusts. LAS appears to have neither disclosed the debt nor its collateral in its 2013 20-F filed on May 15, 2014.

A key to the severity of our findings hinges on whether or not the debt should be consolidated into LAS's financial statements.

If one or both of the Lentuo Electromechanical trust loans should have been consolidated and disclosed in LAS's 2013 audited financial statements, then quite obviously:

The legal entitlement to most of the profits of LAS's Chinese operations is dictated by variable interest entity ("VIE") contractual arrangements, and not through direct ownership. U.S. investors put faith in LAS management, entrusting them not to take actions that jeopardize LAS's claim to the Chinese operating companies' cash flows. Whether by intention or coincidence, LAS's corporate structure is unfortunately constructed such that management only selectively discloses actions taken by Lentuo Electromechanical, a related party that is the holding company of LAS's VIEs.

Therefore, in the best-case scenario, what we have uncovered is a very serious disclosure issue, where management has intentionally failed to disclose that Lentuo Electromechanical raised funds in China collateralized by Chairman Guo's assets, including his ownership interest in LAS, and the revenues of LAS.

Of further concern are indications that the funds raised by Lentuo Electromechanical are potentially being used to build car dealerships that could directly compete with LAS.

Due to its complex corporate structure (detailed below), by design LAS may only have to consolidate the Lentuo Electromechanical trust loans if the funds were used by LAS's variable interest operating entities.

LAS's corporate structure is diagrammed in its 20-F, along with an accompanying list of variable interest operating entities, as follows: 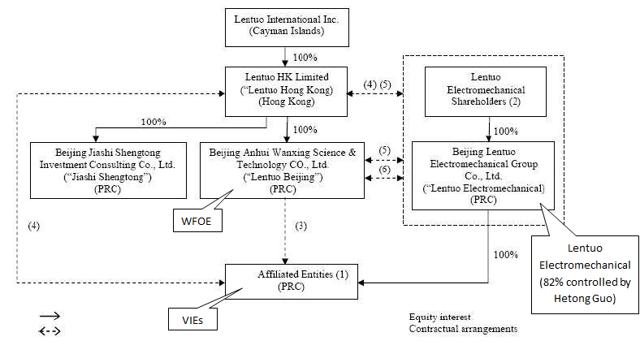 From the chart and list, we can see that Lentuo Electromechanical is not one of LAS's variable interest operating entities, but only the parent company of LAS's VIEs that own the actual dealerships. Lentuo Electromechanical, rather than LAS or its VIEs, was the company that raised RMB 250 million from the two trusts. The key question is whether some portion of the RMB 250 million was deployed to build out LAS's VIE dealerships, requiring consolidation of that portion of the debt in LAS's financials. There is evidence that this may have, in fact, been the case.

LAS requires capital to grow its 4S car dealership footprint in China. Based on recent Chinese news, LAS's related company, Lentuo Electromechanical, raised RMB 250 million in debt to help finance this expansion initiative. The first RMB 150 million was raised in China through a trust fund managed by Gansu Trust in December 2013, according to information obtained from the Chinese website Trust-trust.com, as follows:

"We are also constructing a new Audi dealership in Beijing."

In Chairman Hetong Guo's letter to shareholders dated May 22, 2014, he mentioned the new joint venture investment from Itochu "…that will also help us complete our new Audi 4S dealership in Beijing, whose construction began in November 2012."

From the available information, it appears that either the RMB 150 million trust loan is being used to build LAS's new Beijing Audi dealership (and therefore should have been consolidated, at least in part, into LAS's financials), or is being used to fund a potentially competing Beijing Audi dealership owned by Lentuo Electromechanical that will not be consolidated into LAS's financials.

An additional RMB 100 million was raised by Lentuo Electromechanical through a second trust fund managed by a company perhaps aptly called "Inthedinghong Investment Co., Ltd." A due diligence report for this trust fund is available online at Baidu Wenku. The basic information of the trust fund obtained from Baidu Wenku is as follows:

We called the respective management companies of both trusts (Gansu Trust and Inthedinghong Investment Co., Ltd.) and confirmed that both trusts were fully subscribed, and that Lentuo Electromechanical had obtained the proceeds from both trust loans by the end of 2013.

An analysis of the audited balance sheet footnotes disclosed in the 2013 20-F indicates that LAS never consolidated the trust loans. According to footnote 18 on page F-42, short-term and long-term loans at December 31, 2013 consisted of the following:

Inspection of the maturity and interest rates of the short- and long-term loans disclosed in the 20-F compared to the terms of the two trust loans led us to conclude that the RMB 250 million trust loans were not consolidated into LAS's financials for the following reasons:

Best-Case Scenario Could Be Just as Bad for Investors:

Even if the trust loans should not have been consolidated into LAS's financials, several very serious issues remain:

LAS Management is Clearly Aware of its Disclosure Obligations

LAS does disclose numerous aspects of its relationship with Lentuo Electromechanical, leading to us question why management chose to omit the details of the trust loans and to conclude that the omission was no simple mistake. Note the following detailed series of disclosures of loans and guarantees by, for, and between Lentuo Electromechanical and various LAS entities from the 20-F:

Where are the guarantees for the two trust loans in these detailed disclosures?

There are several issues surrounding the two trusts loans totaling RMB 250 million we have discussed in this report. In a worst-case scenario, LAS has raised money in China without properly disclosing this event to investors and consolidating the debt into its financials. In a best-case scenario, it would seem that LAS's chairman pledged his own stake in the U.S. listed company, along with the rights to all the revenues of LAS's Chinese operating companies to potentially fund direct private competition with the U.S. listed company. We thus seriously doubt the accuracy of LAS's financial statements and disclosures reported in its SEC filings. We urge LAS's auditor, Ernst & Young Hua Ming LLP, to reconsider its audit opinion of LAS, especially regarding the consolidation and disclosures related to the two RMB 250 million trust loans.

Disclosure: I am short LAS. I wrote this article myself, and it expresses my own opinions. I am not receiving compensation for it. I have no business relationship with any company whose stock is mentioned in this article.

The GeoTeam
27.81K Followers
GeoInvesting has worked diligently over the last decade to understand and benefit from working in areas that the Wall Street “crowd” has avoided – namely, microcap stocks. This niche of the market, while mostly ignored by analysts and financial media, is still often quietly invested in by many well-known billionaires. We apply our own deep-dive analysis in the space to find pockets of information arbitrage and unnoticed opportunities that have acted as the backbone for our investing success for over a decade. Unlike some investment banks and sell-side analysts, we don’t get paid by companies to write about them. --Armed with over a dozen analysts and a team of on the ground due diligence experts led by Maj Soueidan’s three decades of full-time investing experience, we look for high-impact idea generation. If you are looking to broaden your knowledge of investing, GeoInvesting can help with actionable insights on a wide array of stocks. -- Since GeoInvesting’s inception in 2007, we’ve been helping investors understand companies better by interviewing management teams, dissecting conference calls, interacting with our wide network of investors and scouring financial documents for hidden clues. GeoInvesting provides quick, concise and efficient research instead hundreds of pages of meaningless boilerplate jargon to pour through. You will no longer have to sift through these documents to find the most relevant aspects of a company’s operations, results and guidance – that’s our promise. --Sign up today and start to get: >Education on investing, both financial and psychological>Actionable Alerts>Exclusive Research>Trading Ideas>GeoTeam Positions>Access to the GeoTeam through our exclusive chatroom.--See GeoInvesting Micro Insights on Seeking Alpha Marketplace--About Maj Soueidan, co-Founder GeoInvestingMaj Soueidan is a full-time investor of 30 years. He co-founded GeoInvesting to bring institutional quality investment research to the individual investor and help broaden the awareness of the opportunities that exist in the inefficient micro-cap universe. In addition to educating investors on winning equity strategies, Mr. Soueidan has been on a mission to protect investors from fraud and pump and dump schemes. He introduced the “China fraud” to Geoinvesting and through his research process, identified dozens of U.S. listed China stocks he concluded were frauds, so that the Geoinvesting team could perform exhaustive on-the-ground due diligence research on them, including Puda Coal and Yuhe Intl. -- Maj works with and manages the GeoInvesting Team on a daily basis to increase its investment opportunity pipeline and heighten GeoInvesting’s awareness in the financial markets to intensify its market influence. He stresses the concept of “information arbitrage” in an era where information overload has actually made it more difficult for investors to locate profitable information. An information arbitrage exists when a disconnect between stock prices and available public information on a company is noticeable, and monetarily worth pursuing. ----------------------Other Publications:SanaCurrentsGeoInvesting has partnered with Bill Langbein of Sanacurrents to explore biotech opportunities through the publication of sentiment reports.--Before founding SanaCurrents, William (Bill) Langbein spent more than 20 years as a life science business journalist, with stops at California Medicine, In Vivo and Reuters Health. During that time, he wrote on genomic discoveries, the transition of the pharmaceutical companies to rely more on biologics, and the dawn of precision medicine, through which most drug developers came to recognize a one-drug-for-all approach would no longer work. --Because of the inherent volatility of biopharma and medical devices, small companies typically fly under the radar of investors. The emergence of precision medicine, however, reduces the volatility of small companies and increases the potential for strong returns. SanaCurrents was founded to identify the undervalued therapies that would benefit patients and investors the most. Find out more about SanaCurrents here - https://seekingalpha.com/instablog/360252-the-geoteam/5261407-sanacurrents-new-service-dissects-biotech-catalysts-assigns-sentiments-outcomes-case-studies