With its recent acquisition of Nest Labs Inc., Google (NASDAQ:GOOG, NASDAQ:GOOGL) has further positioned itself to enter the utilities industry as an energy provider.

Along with several other companies such as Comcast (CMCSA) and AT&T (T), Google hopes to exploit existing portals into the tens of millions of homes to challenge the monopolistic utility market. This could become a bountiful revenue stream for the Silicon Valley giant.

A New 'Battlefield'
Google is in good company. "The battleground over the next five years in electricity will be at the house," said David Crane, CEO of NRG Energy Inc., the biggest independent power producer in the U.S., through significant investments in solar power projects.

"When we think of who our competitors or partners will be, it will be the Googles, Comcasts, AT&Ts who are already inside the meter. We aren't worried about the utilities because they have no clue how to get beyond the meter, to be inside the house," said Crane, who has stated that his goal is to transform NRG into the "Amazon.com" (AMZN) of the U.S. energy industry.

A $400 Billion Industry
The stakes are high with almost $400 billion in annual revenue generated by the retail power industry. The pressure to transform production and delivery continues to build in the face of green politics, deregulation, rooftop solar systems and increased competition from independent, small-scale electric grids known as microgrids.

As with many industry revolutions, technology drives the transformations. Google has the capability to generate electricity and sell it directly to consumers or to the utility companies. With the smart technology developed by Nest and others, Google can track and amass energy conservation from millions of businesses and homes.

Google - Already A Player
Although Google remains quiet about its long-term energy ambitions, it has already become an energy generator through its $1.4 billion investments in clean energy. Moreover, Google has secured a wholesale power license. Recently, the company paid $100 million to a program through SunPower that promotes rooftop solar power.

In addition, Nest, which produces the Learning Thermostat that anticipates and adjusts to user habits, gives Google a head start into the growing smart-home industry just in time to optimize the burgeoning markets in decentralized, home-produced electricity known as distributed generation.

Some industry experts suggest that with its acquisition of Nest, Google has entered the utility market through a back door. With smart thermostats, the company can use its technology to harness huge quantities of demand response while competing directly with the utility companies through its own green-energy projects.

Moreover, the utility companies seem wary of change and constrained by custom, traditional practices, regulatory uncertainties or all of the above. The unwillingness to embrace the future may prove to be a mistake similar to Eastman Kodak, which resisted the digital camera revolution. Ultimately, this may be the opening Google needs to dominate a new segment of the energy industry and secure a significant market share of the $400 billion market.

Google's entry into the utilities space is timely, given Obama and the EPA's new restrictions on emissions standards, which could quickly evolve into greater demand for low-carbon, energy efficient solutions and products.

Rival Apple (AAPL) has taken notice as well, with plans to roll out a Smart-home system, with similar features.

While Google has struggled YTD - with results below expectations and some concerns that the company was falling behind Amazon in cloud computing, this move should ensure Google has a consistently strong business in the years to come, capitalizing on changing energy norms and consumer interests and desires. 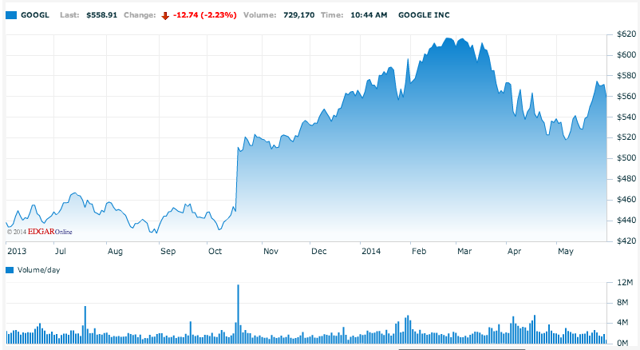 Given this vital new development, we suggest investors remain positive on GOOGL in 2014.

Don Dion
12.68K Followers
Don Dion is the CEO of Inland Management, a company focused on acquiring, subdividing, developing and marketing large tracts of land on the fringes of major metropolitan markets. Inland Management has sold land in all 48 contiguous states totaling billions of dollars. As CEO, Don is responsible for helping to maintain and enhance the firm’s strong financial position and identifying opportunities for growth. In addition to his role at Inland Management, Don Dion is the Chief Investment Officer of DRD Investments, LLC. Based in Naples, FL. and Williamstown, MA., DRD Investments is a family office focused on managing a long/short hedge fund, real estate, venture capital and various other financial assets for the Dion family. Don also serves as the trustee of the Dion Family Foundation, which focuses on helping individuals with tuition assistance at Catholic Institutions for grammar school, high school, and college education. The foundation also helps individuals by supporting Massachusetts General Hospital. Don is on two leadership boards and advisory committees at Massachusetts General Hospital and the Home Base Program (a partnership between Mass General and the Red Sox Foundation). He consults with Saint Dominic's Academy and serves as a trustee of Saint Michael’s College. Previously, Don was the founder and CEO of Dion Money Management, a fee-based investment advisory firm for affluent individuals, families and non-profit organizations. Founded in 1996 and based in Williamstown, MA. and Naples, FL., Dion Money Management managed approximately one billion in assets for clients in 49 states and 11 countries. While at Dion Money Management, Don was responsible for setting investment policy, creating custom portfolios, and overseeing the performance of client accounts. Don sold the firm to NYC-based Focus Financial Partners (FOCS) on September 1, 2007 and no longer manages money for other families or institutions. Don remains a shareholder of Focus Financial Partners (FOCS). Don is also the retired publisher of the Fidelity Independent Adviser family of newsletters, which provided a broad range of investor commentary on the financial markets, with a specific emphasis on mutual funds and exchange-traded funds. With nearly 100 thousand subscribers in the United States and 29 other countries, Fidelity Independent Adviser published two monthly newsletters and one weekly newsletter. The flagship publication, Fidelity Independent Adviser, was published monthly for 16 years and reached over 60,000 subscribers. In 2011 Don and his daughter Carolyn co-authored the Ultimate Guide to ETFs, available on Amazon.com. Prior to founding Dion Money Management, Don co-founded Litchfield Financial Corp. (LTCH) with Summit Partners. Don served as Chairman and CEO of Litchfield, which was listed on the Nasdaq in 1992 and acquired by Textron Corp. (TXT) in 1999. Don was also the Executive Vice President, CFO and General Counsel for Patten Corporation (BGX) from 1986 to 1988, where he played a critical role in the company’s successful initial public offering on the New York Stock Exchange. From 1983 to 1985, Don was a corporate lawyer with the Boston Law Firm of Warner and Stackpole. Before joining Warner and Stackpole, Don worked as a C.P.A. for Ernst and Young from 1979 to 1983. Don graduated with honors from Saint Michael’s College in 1976 with a B.S. degree in Economics and Business Administration. He received his J.D. from the University of Maine Law School in 1979 and his LL.M. from Boston University Law School in 1982. Don can be reached at donalddion@gmail.com