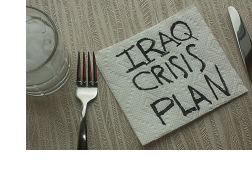 If top policy makers and military leaders were caught off guard by the military action in Iraq, as reported by The Wall Street Journal, then we can assume the same can be said for many investors. From Reuters:

The stunning advance of the Islamic State of Iraq and the Levant, which aims to build a Caliphate ruled on medieval Sunni Islamic principles across Syria and Iraq, is the biggest threat to Iraq since U.S. troops withdrew in 2011. Hundreds of thousands of people have fled their homes in fear as the militants seized the main cities of the Tigris valley north of Baghdad in a matter of days. The security forces of Iraq's autonomous Kurdish north, known as the peshmerga, or those who confront death, took over bases in Kirkuk vacated by the army, a spokesman said. "The whole of Kirkuk has fallen into the hands of peshmerga," said peshmerga spokesman Jabbar Yawar. "No Iraqi army remains in Kirkuk now."

Fear Can Be Tamed With Contingency Planning

Events that catch investors by surprise often induce fear and tossing and turning at night. Making investment decisions based primarily on fear is a recipe for stress, frustration, and disappointing performance in the markets. A recent example was the scary 1929 parallel chart that was making the rounds on Wall Street in the first quarter. Rather than liquidating stocks based on the depressing 1929 head-and-shoulders analogy, we penned the following on February 11 as an alternative and more rational approach to portfolio risk management:

Did The 1929 Plan Help Reduce Stress?

The before and after charts say the simple and hypothetical "don't lose too much sleep" strategy was useful from a psychological and investment perspective. 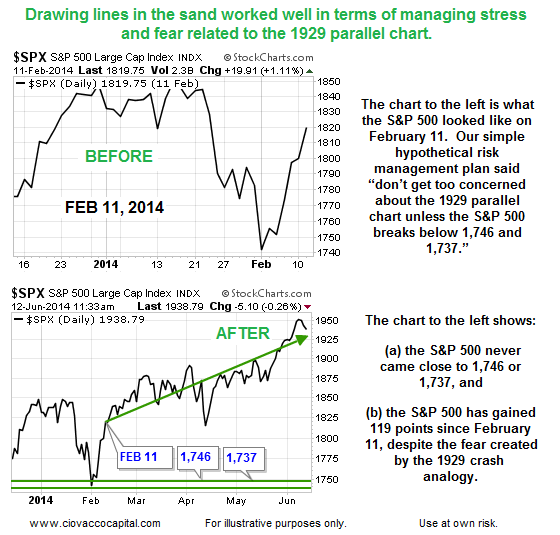 Back Of The Napkin Plan For Iraq

Our purpose here is to illustrate the concept of using guideposts to manage stress and portfolio risk. A simple and hypothetical approach to the legitimate concerns being raised about the unrest in Iraq is to use areas of possible support on the S&P 500. For example, we might think along these lines: 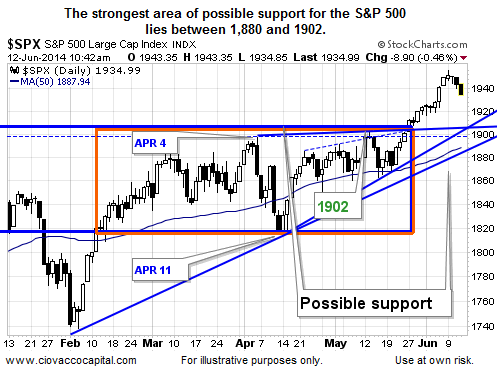 People Are Looking For An Excuse To Sell

The negative impact from Iraq was complemented by weak reports on U.S. employment and retail sales. From Bloomberg:

"People are looking for a reason to sell stock right now," Dan McMahon, director of institutional equity trading at Raymond James and Associates, said in a phone interview. "The economic numbers were a little disappointing. You can't make new highs everyday." Investors are watching developments in Iraq, where Islamic militants extended gains after capturing the country's second-biggest city, while the U.S. weighed an Iraqi request for air support. Oil climbed to an eight-month high on concern the fighting will hurt exports from the second-largest producer in OPEC."

Since the market's pricing mechanism determines the value of our investments, it is the market's reaction to Iraq, rather than our personal views or fears, that is most relevant. If the situation in Iraq continues to escalate in a troubling manner for stocks, it is unlikely that the S&P 500 will hold above the 1,902 line in the sand. Conversely, if the S&P 500 remains above 1,902, then logic tells us the market is not overly concerned about the situation in Iraq. The line in the sand gives us a firm guidepost to assist in our decision making process.

We hypothesized Wednesday that it would take a cluster of weak days to cause significant damage to the market's tolerance for risk. As expected, Wednesday's session had little impact on the readings of our market model. Since the model serves as our guidepost for decision making, we have made no allocation changes this week. We continue to hold stocks (VTI), leading sectors (XLK), and Treasuries (TLT). If the incoming economic data and unrest in Iraq result in further weakness in equities, we will not hesitate to make the necessary defensive adjustments to our portfolios. For now, we remain in "monitoring the situation" mode. If you prefer to build your IF, THEN plan using the Dow as a guidepost, the chart below may be helpful. 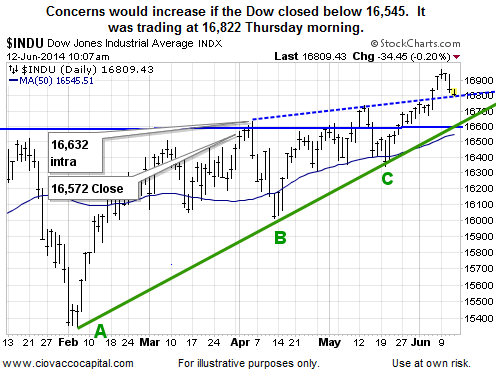 Chris Ciovacco
9.64K Followers
Chris Ciovacco is the founder and CEO of Ciovacco Capital Management (CCM), an independent money management firm serving individual investors nationwide. The thoroughly researched and backtested CCM Market Model answers these important questions: (1) How much should we allocate to risk assets?, (2) How much should we allocate to conservative assets?, (3) What are the most attractive risk assets?, and (4) What are the most attractive conservative assets? Chris is an expert in identifying the best ETFs from a wide variety of asset classes, including stocks, bonds, commodities, and precious metals. The CCM Market Model compares over 130 different ETFs to identify the most attractive risk-reward opportunities. Chris graduated summa cum laude from The Georgia Institute of Technology with a co-operative degree in Industrial and Systems Engineering. Prior to founding Ciovacco Capital Management in 1999, Mr. Ciovacco worked as a Financial Advisor for Morgan Stanley in Atlanta for five years earning a strong reputation for his independent research and high integrity. While at Georgia Tech, he gained valuable experience working as a co-op for IBM (1985-1990). During his time with Morgan Stanley, Chris received extensive training which included extended stays in NYC at the World Trade Center. His areas of expertise include technical analysis and market model development. CCM’s popular weekly technical analysis videos on YouTube have been viewed over 700,000 times. Chris’ years of experience and research led to the creation of the thoroughly backtested CCM Market Model, which serves as the foundation for the management of separate accounts for individuals and businesses. Copy and paste links into your browser: Market Model: http://www.ciovaccocapital.com/sys-tmpl/ccmmarketmodel/ More About CCM: http://www.ciovaccocapital.com/sys-tmpl/aboutus/ YouTube: http://www.youtube.com/user/CiovaccoCapital Twitter: https://twitter.com/CiovaccoCapital CCM Home Page: http://www.ciovaccocapital.com/sys-tmpl/hometwo/
Follow
32 Comments