By way of introduction: This is my first article to be submitted on this forum, having waited to try and correctly time this article. Readers will note that the article is not accompanied by any hedged or face-saving paragraphs. I will be either right or wrong. (refreshing change?)

Since mid-February, when we first came to this magnificent forum, we have made 53 trading recommendations, all with appropriate and updated protective stop orders, in the commentary section of various stock articles. Turns out, we've been on a "hot streak" in that all 53 short and long recommendations produced profits, with no losses, some profits as large as 85 points, others returned better than 30%.

A picture is worth a thousand words: A perfect and curious overlay of the chart of 1929

I am not implying a "crash" is immediately ahead, just the fact that the patterns are remarkably similar in their bearish implications. This same pattern and overlay occurred in 1987, when the market dropped over 500 points in one day and 24 percent in a Monday and Tuesday period in October. 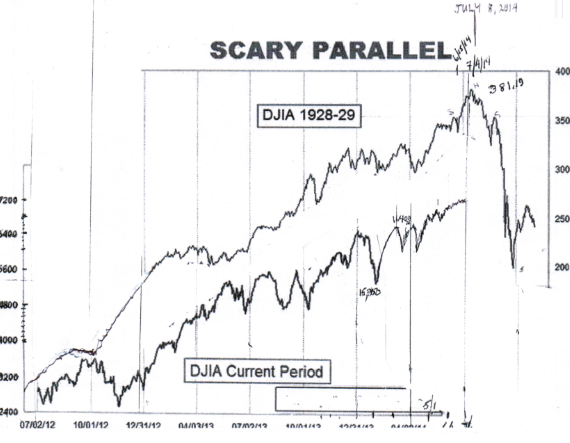 History has a way of repeating itself, but differently

The market will always move in a fashion least expected. This has proved out over the past one hundred years, and is the reason it is so difficult to trade markets on a short-term basis. I am predicting a decline starting between June 25 and July 8 of this year.

History will only repeat itself if all participants from the previous and similar action by the market are no longer living. This is the primary reason the recent advanced values in this market will not repeat the very highly inflated levels of the dot com bubble of 2000. There are too many former participants that would recognize the insane valuations.

Therefore, the bear is at Peter's door now, and his crying wolf (or bear) is indeed appropriate.

The decline will take one of two forms (outlined here to help you recognize the patterns coming):

Once the decline has spent itself, a lower volume test of the bottom of wave five should occur (i.e., March 2008) and a new advance will begin. During wave five, the purchase of stocks that have outperformed the market during the last and final wave five decline can be accumulated (as in March 2009, i.e., Apple (AAPL), Priceline (PCLN), Baidu (BIDU), Google (GOOG, GOOGL), etc., for the next market advance).

Doc's Trading strongly recommends the raising of cash prior to a Wave B return rally, which will be the first return of the initial decline expected to begin in early July. We recommend selling short or buying put protection of any current positions. This decline is not expected to ever be labeled a crash anymore than that which occurred in 1987. However, the sentiment, statistics and re-inflated current values leads us to make this bold and unhedged prediction of an imminent correction.

"Sell in July and fly"

The market tends to repeat patterns no longer recognizable due to those who participated in the similarity being now dead and buried… it is the way human emotional weaknesses and incorrect actions are allowed to repeat themselves over and over.

A crash will occur, but many years from now, when all who witnessed 2008-2009 are no longer with us.

Additional Disclosure: The author is currently hedged short and intends to increase his market short position within the next seven days as bearish patterns continue to emerge.

Disclaimer: This article is for information purposes only. There are many risks involved in investing including loss of principal. Doc's Trading or Doc make no guarantee with regard to any recommendations, implied or made herein, with regard to performance or projections. There is also no guarantee that the predictions, goals or estimates of either past or predicted performance will be met or repeated.

Doc's Trading
799 Followers
Born June 27th 1935 in Vienna, Austria. The youngest singer in my family which sang with the von Trapp singers, of which the film Sound of Music was based. Maria (played by Julie Andrew) was actually my nanny before she married Capt von Trapp (played by Christopher Plumber) who was not in the navy of Austria since Austria, being a land locked country, had no navy. The little boy "Kurt" in the film was actually me. My mom never sued Twentieth Century Fox for using our story without receiving payment. (the von Trapps never went over the Alps to Switzerland.. that was my family and me...the captain and his singing family went to Italy and from there came to America via London) When arriving in USA we moved to Arlington VT. where my neighbor was Norman Rockwell. My mom disallowed me from sitting for him despite frequent invitations to do so. Second immortality lost. :-) Graduated with honors(Wall Street Journal award) from Lafayette College in 1957. After attending med school became ER physician in Conn. hospital, on the night shift. Had a seat on the NYSE at the same time and commuted from the hospital to Wall Street daily. After a few years of this, left medicine to stay with the NYSE Stock exchange. Was also partner with Leon Cooperman in a NYSE member firm in late sixties. Carl Ichan and other notables of Wall Street are on best friends list.. Traded money for many well known names on the street such as Peter Kellogg of Spear Leeds and Kellogg, etc. Am only surviving founder of the CBOE opened In early 70's. Names of "stripp, strapp, iron condor, condor, straddle, strangle" were all names that were thought up and first used by me. Traded options long before the CBOE was founded. Traded on the CBOE under acronym PPP (known as Peter Paul) till 1988. Started a Classic Jaguar restoration company in 1988 till 2011. Went back to trading my own account, off floor in 2008. 60 years trading experience. Have been an avid technician the entire 60 years. We use fundamentals, PE ratios, overall market conditions, Fibonacci retracements, Elliott Wave theory, my own mathematical formulas as well as my own technical chart work (5 minute, daily, weekly as well as yearly) charts in analyzing and preparing recommendations to buy sell or hold. ALL OUR ARTICLES are and will contain material discussion on timing and will be geared for the short term trader as well as the long term investor. I am on my computers, monitoring live charts and financial news on a minute to minute basis every trading day, from pre-market trading opening to after-market trades and the final closing. Unlike Seeking Alpha articles from other contributors, all our articles will be prepared for maximum gain and minimum loss by supplying sell and buy stop recommendations along with the original recommendation. These will be updated as necessary over future time intervals. All will be published and added to all our recommendations on an "as needed" basis as often as market forces cause the need for such alterations. The use of option strategies as adjuncts or substitutions for stock will also be used and discussed as well as updated as necessary, so the investor taking our advise will never be out there "on his own" after acting on our initial recommendation from Doc's Trading".. Readers may contact me directly at: doc@strawberryaz.net or (cell)928 951 4779
Follow
126 Comments