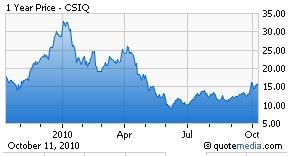 The company ranks in the bottom half of its peer group on six of the eight quantitative metrics. The company ranks 24th in operating cash flow to net income for the last-12 months based on our calculations. The company’s limited cash flow from operations in the last 12 months negatively impacts the company’s free cash flow to net income and cash conversion cycle ratios. As the company relies more on internally produced solar cells the company’s low ranking of 25th for gross margin for the last 12 months should improve. The company uses short-term debt as its main source of financing; however, the company did issue 6.9 million shares of common stock in fiscal 2009 that raised over $100 million. The debt-to-equity and cash-to-debt ratios rank favorably in the industry at number 18 and 9, respectively.

Michael Lofing
57 Followers
Michael Lofing, CPA, is the founder of Earnings Expert which provides qualitative investment research focused on in-depth analysis of selected industry groups for institutional investors. The research incorporates fiduciary, business and financial risk of individual companies and the selected industries. Lofing was the Managing Director, Financial Analysis at Glass Lewis & Co. from 2003 to 2008 which provided accounting and financial research with a focus on corporate governance and risk management policy to institutional investors. He provided SEC, GAAP and financial reporting expertise, office management, idea production, and was heavily involved with client contact and sales. Lofing was with Koch Industries Inc., ...More where he served as vice president of finance and business development for Koch Performance Road Inc., a wholly-owned subsidiary of Koch Industries. During his six years at Koch Industries, Lofing was responsible for consulting on technical accounting issues and implementation of new accounting standards. His responsibilities included financial reporting, financial disclosure and financial statement review and analysis. He was a senior manager in the Coopers & Lybrand audit and assurance group. During his tenure at Coopers & Lybrand, he was a FASB practice fellow and a senior manager in the National Audit and Assurance Directorate. He graduated from the University of Wyoming with a Bachelor of Science degree in accounting.
Follow