Staffing jobs have maintained the strong upward trend that began earlier this year, showing substantial year-to-year employment growth in the third quarter, according to survey data released today by the American Staffing Association.

U.S. staffing companies employed an average of 2.6 million temporary and contract workers per business day from July through September. This is 24.9% more staffing employees per day than in the same quarter last year and an increase of 8.1% in average daily staffing employment over this year’s second quarter. The year-to-year percentage increases in employment in this year’s second and third quarters are comparable to the industry’s job growth rates in the early 1990s.

“During the past 12 months, staffing firms have added over a half million new jobs to the economy,” says ASA president and chief executive officer Richard Wahlquist. “Demand for temporary and contract help is expected to remain strong as businesses turn to flexible work force solutions to help them improve efficiency and productivity while adjusting to changing economic conditions.”

Staffing sales in the third quarter of this year totaled $18.1 billion, according to the ASA survey results—a 35.6% increase over the same period last year. This surpassed last quarter’s previous record high as the largest year-to-year percentage increase since ASA began tracking industry sales in 1992.

Why does this matter? I have been saying for a while that temp. staffing is the leading employment indicator. Here are temp staffing levels since 1992 followed by 4 wk continuing initial claims and continuing claims. 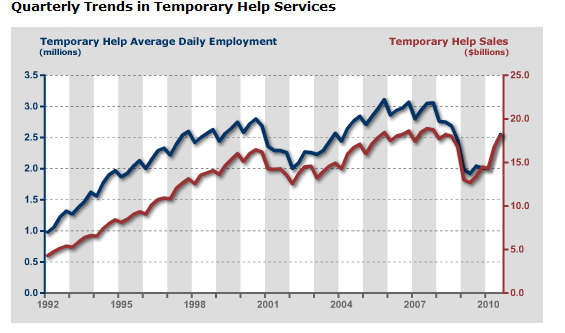 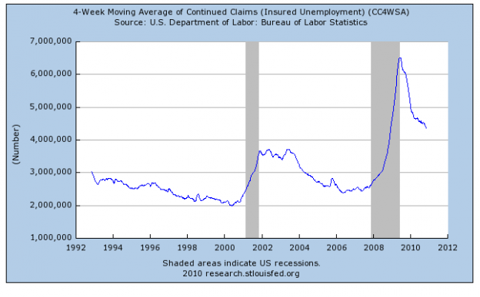 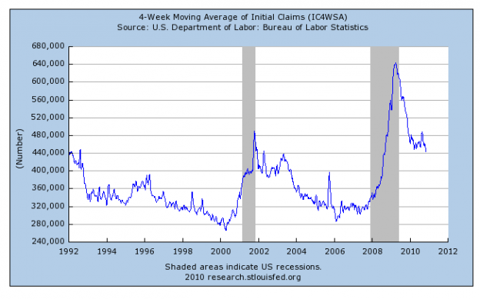 Notice the inverse relationship? In hindsight this relationship makes sense, although since I never hear anyone talking about it, they either are not aware of it or choose to ignore it even though it is a near 20 yr. old relationship.

Further, and here is the important part, the temp. staffing breaks direction 3-4 months before the government data registers the change. Notice the recent trends, temp staffing broke down in Q4 2007 and the government surveys did not reflect this until Q1 2008. More recently, the current uptrend in temp employment began in Q1 2009, paused in early 2010 and then continued its ascent since. This is the activity we saw in government data late Q2 2009 and this summer in employment data (3-4 month lag), as it began to improve. The recent downward leg in government data was predicted by the temp staffing index late this summer and into fall, as it rose steadily.

What to think about the future? Based on what I am seeing here, I expect employment data to continue to improve through the end of 2010 (4 week averages, weekly data irrelevant as it is prone to large swing revisions). I would expect to see a pause at year best levels Dec/Jan, and we will determine an outlook for Q1 in full as the rest of the year unfolds…

Todd Sullivan
7.37K Followers
Todd Sullivan is a Massachusetts-based value investor and Co-Founder and General Partner in Rand Strategic Partners. He looks for investments he believes are selling for a discount to their intrinsic value given their current situation and future prospects. He holds them until that value is realized or the fundamentals change in a way that no longer supports his original thesis. His blog features his various ideas and general commentary and he updates readers on their progress in a timely fashion. His commentary has been seen in the online versions of the Wall St. Journal, New York Times, CNN Money, Business Week, Crain's NY and others. He has also appeared on Fox Business News and is a RealMoney.com contributor. He has twice presented at Bill Ackman's Harbor investment Conference and is a regular presenter at the Manual of Ideas "Best Ideas" conferences. Visit his sites: ValuePlays (http://valueplays.net/) , Rand Strategic Partners (http://randstrategicpartners.com)
Follow
3 Comments