U.S. companies earned profits at an annual rate of $1.659 trillion in the third quarter, according to a Commerce Department report released Tuesday. In non-inflation adjusted terms, this is the highest figure since the government started keeping track over 60 years ago. Since the credit crisis ended, many businesses have resumed growing profits -- but have not resumed creating jobs.

The unemployment rate remained unchanged at 9.6% in October, with 14.8 million persons unemployed, according to official figures.

U.S. firms slashed 8.5 million jobs during the last recession; millions of these workers remain unemployed. However, corporate profits are soaring to pre-crisis levels. This is because American businesses are able to increase profits by rising productivity, increasing exports, cutting costs, and in some cases raising prices. Productivity simply means extracting more or the same amount of work using fewer workers. Globally, U.S. companies are leaders in productivity due to the corporate culture prevalent in the U.S. and the fierce competition in many industries. Hence, in the current situation, they are wringing out more profits with fewer workers.

This concept was illustrated in a recent Bloomberg article:

“When the productivity growth comes, then watch out because that is when companies start not needing so much labor,” Edmund Phelps, a Columbia University economist and Nobel laureate, said in an interview.

Some 142 non-financial companies in the S&P 500 had improvements in operating margins of three percentage points or more from the final three months of 2007, when the previous expansion peaked, compared with the most recent quarter, according to data compiled by Bloomberg as of yesterday.

The chart below shows annualized corporate profits, both before and after taxes, since 1947: 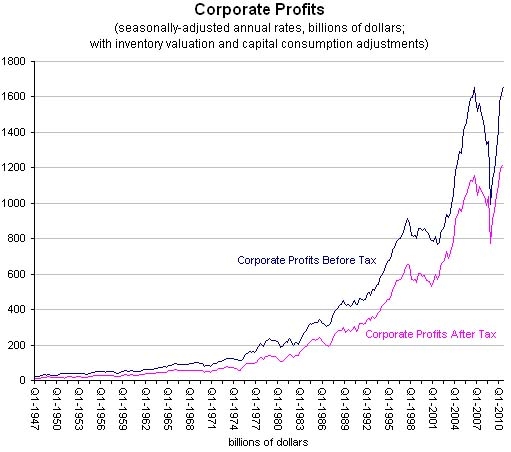 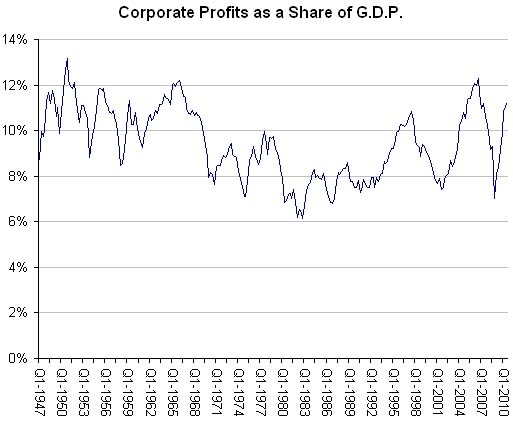 (Charts source: Bureau of Economic Analysis, via Haver Analytics, as published by The New York Times.)

It represented 11.2% of GDP last quarter, a figure that has been growing for seven consecutive quarters. Therefore, for the past seven quarters, companies have been earning higher profits with almost no hiring of workers, since unemployment remains stubbornly high at around 10 percent.

The Economist wrote about this dichotomy in the U.S. economy back in August in an article entitled “Profits, But No Jobs“:

Americans used to love to hear tales of success in business. One of the many oddities of the current joyless economic recovery is that this traditional enthusiasm is strikingly lacking. Corporate America has bounced back impressively. The quarterly results season that is now nearly over has revealed that profits are back within a whisker of the all-time highs achieved before the downturn in late 2008. By some calculations, the rate of recovery of profits from their trough is the strongest since the end of the Great Depression.

Yet nobody seems pleased. Not investors, who have failed to push up share prices in the way this sort of earnings growth would have caused them to do at this stage of previous economic cycles. Certainly not politicians, who complain that firms are “hoarding” cash and creating hardly any new jobs. As Robert Reich, an economist at Berkeley and former labour secretary under Bill Clinton, puts it: “Bottom line: higher corporate profits no longer lead to higher employment. We’re witnessing a great decoupling of company profits from jobs.” [Emphasis mine.]

Corporate America is reaping the rewards for tough actions taken after the financial markets collapsed in September 2008.

Yes indeed. There is a huge disconnect between rising corporate earnings and job growth. This recovery is not only a “jobless recovery” but also a “joyless recovery." According to S&P, non-financial companies in the S&P 500 held over $1 trillion in cash at the end of the first quarter. Much of this cash is neither getting paid out as higher dividends to investors, nor being spent on capital investments.

It remains to be seen how long this phenomenon of rising corporate profits with no increase in employment numbers can continue.

David Hunkar
67.95K Followers
David Hunkar (pseudonym) holds a Masters Degree in Finance and Economics. He is a part-time consultant for a financial consulting firm where he manages portfolios for manages portfolios for self and family. He has been an investor for the past ten years. David focuses on foreign stocks trading in the US markets including the OTC market. He concentrates on high dividend yield and dividend growth stocks. ETFs are his another favorite investment vehicle. In addition to his contributions here at Seeking Alpha, you can also visit him at his blog www.topforeignstocks.com
Follow
14 Comments