By freezing its exchange rate and pulling out all the stops on fiscal and monetary stimulus, China got through the global recession with only a mild slowdown in GDP growth. Now it is facing the inflationary consequences. Consumer price inflation, after rising steadily all year, hit a 4.4% annual rate in October, approaching the government's red line. How will China choose to deal with the inflation threat? The answer is important both for China and its trading partners, because anti-inflation policy will determine what happens to the exchange rate of the yuan over the coming months.

Inflation is a key factor in exchange rate developments because the balance of trade depends on the real, not just the nominal, exchange rate--a fact that is not always clearly understood. Everyone knows that we need to adjust nominal wages for inflation to reveal trends in real wages, and adjust nominal interest rates for inflation to find real interest rates. For the same reason, we need to adjust nominal exchange rates for inflation to see what is really happening to the competitive balance between any two countries. In the case of the yuan vs the dollar, the simplest way to make the adjustment is to add the difference between the Chinese and U.S. inflation rates to the rate of nominal appreciation of the yuan. Because inflation in recent months has been faster in China than in the United States, the rate of real appreciation of the yuan has been faster than the nominal rate. The following chart () breaks the monthly rate of real appreciation into its components, nominal appreciation and the inflation differential. 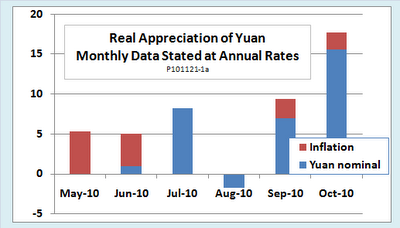 Ed Dolan
384 Followers
Edwin G. Dolan is a Senior Fellow at the Niskanen Center. He holds a Ph.D. in economics from Yale University. Early in his career, he was a member of the economics faculty at Dartmouth College, the University of Chicago, and George Mason University. In the 1990s, he taught in Moscow, Russia, where he and his wife founded the American Institute of Business and Economics (AIBEc), an independent, not-for-profit MBA program. After 2001, he taught at several universities in Europe, including Central European University in Budapest, the University of Economics in Prague, and the Stockholm School of Economics in Riga. He is the author of Introduction to Economics from BVTPublishing and numerous academic articles. He makes his home in Northwest Lower Michigan.
Follow
30 Comments
To ensure this doesn’t happen in the future, please enable Javascript and cookies in your browser.
Is this happening to you frequently? Please report it on our feedback forum.
If you have an ad-blocker enabled you may be blocked from proceeding. Please disable your ad-blocker and refresh.